Facebook Instagram Youtube Twitter Patreon Shopping-bag
Menu
Flashback in time. Here are some of the photos from Hikkaduwa and Galle, showing some of the tsunami effects, four months into reconstruction. Please keep in mind that of the affected areas in Sri Lanka, these were the most lightly hit -- conditions are much worse in the east and northeast: 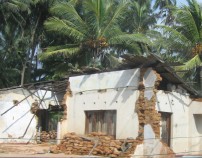 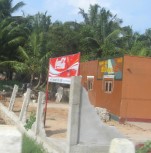 There were *so many* destroyed houses along the side of the road. Somehow this one just shreds me, makes me blink back tears every time I look at it. I think it's the remants of pink and blue and yellow paint. It must have been such a cheerful house to live in.

A drowned road. Months after the tsunami, the water line is much higher than it was before. The coastline of Sri Lanka has changed dramatically from what it has been for the last thousand years.

Boats were just shattered. Some fishermen, who had been fishermen for generations, are too frightened to go out to sea again. I can't blame them. 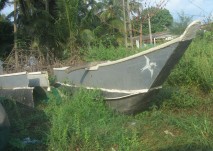 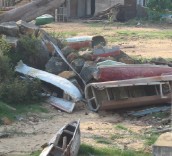 A train, the "'Queen of the Sea," was ripped off its tracks and dragged into the sea. More than 800 people were killed; I'm not certain exactly how many. I'm afraid I can't read the Sinhalese on the signs, or I would translate for you. 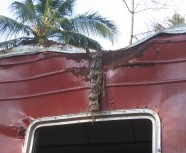 Some reconstruction is underway -- the train line has been replaced, at least, and the trains are running again. A bus station that had been totally destroyed has also been repaired.

Attempts at reconstruction. Some people are living in tents on the grounds where their houses used to be. Others are in mass camps. A lucky few are in temporary wood houses which are currently being built -- there are still far more people in tents, roughly 150,000 in Sri Lanka alone.

Tragically, reconstruction has not brought the country together as many of us had hoped. Instead, it appears to be tearing it apart again.

2 thoughts on “Flashback in time. Here…”