Jed and I are still tweaking it, but I've gone ahead and made DesiLit Daily live. (I still wouldn't mind a better name for it, but oh well.) Link away! Tell your friends!

I've concluded from the lack of response to my last post that the real reason that you can't qualify for SFWA with poetry is that no one actually cares. Ah well.

Sorry to be quiet yesterday -- I've been on a mad writing binge. Sunday I revised Chapter 5 and 6, writing for nine or ten hours straight, and mostly by cannibalizing Chapter 7. Monday I revised Chapter 7, adding a bunch of new material. I need to add one more brief scene to that, I think, and then I revise Chapter 8, which is more a matter of trimming than adding, and then we're done with Part II. I'm hoping to have that finished today and out to readers by tonight. We'll see. If I'm very good, I'll go back and rework the beginning to start with the dinner party scene too, though that may just be hubris talking.

By dinnertime yesterday, I was utterly sick of the computer screen, so I ended up futzing with artsy things for the first time in a while. I wrapped up the curry powder I was supposed to send out ages ago in scraps of sari fabric and ribbon -- an apology for being late, at least they get it pretty. And I started work on a stained glass project for our home. See, next to the front door of our condo, there's a long, narrow pane of glass. It's covered by a hanging drape right now, for privacy, and that's pretty enough, but I've been itching to turn it into stained glass for years now. So yesterday I finally started putzing with it.

Kevin helped me measure and then make a scaled-down mock-up, so I could sketch out my design (right). I'm going with a Chagall technique -- painting on glass, and then soldering the pieces together. I'm working with biggish pieces of glass (the base size is 8" x 10") so as to make my job easier, but I may end up painting in more solder-simulating lines later, for effect. We'll see.

Below is the partly-finished top left panel -- I'm tentatively planning on a deep blue background, if I can get it to look the way I want (v. Chagall-like, swirly shades of blue and light). Going to have to practice that some on scrap glass before I try adding it to the back of this. The flowers were initially supposed to be bougainvillea, but they didn't end up so bougainvillea-like. Given the Japanese garden feel of the rest of the piece, I'm thinking maybe they're camellias? Perhaps we'll just go with 'flowers.' I'm pretty sure they're flowers.

One frustrating element of all this so far is that the paints I'm using are going on kind of streaky, unless you use a lot (in which case they're all solid). That's fine for the flowers, which should have some texture, but what I'd like to do for the background is have a more light, translucent look, like the Chagall photos linked above. Should I try to thin the paints with water? Or put on lots of paint and then use a sponge to remove some? Thoughts welcome, especially if you've worked with stained glass paints. I'm using water-based paints, because the oil-based ones are a pain to deal with (though pretty). 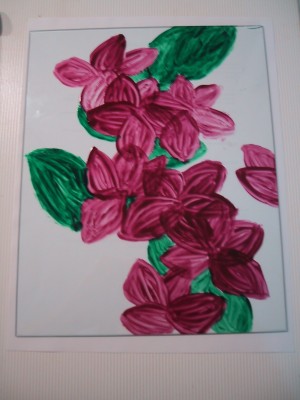