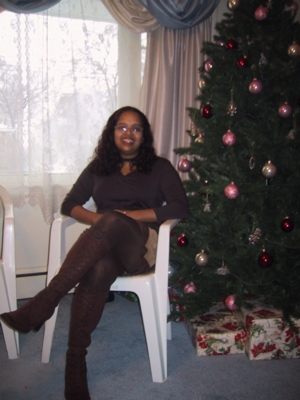 It was Christmas at my aunt's house this year, which was charming, but small. She's in the middle of moving to a larger house, which means we won't be nearly as cramped if we do it again with her. She did do a nice job decorating her tree, though. That's me next to it, with my kick-ass brown boots and the jester-colored (diamonds of cream, brown, green and red) skirt Roshani talked me into buying -- a good choice; my mom loved it. (It's always a challenge finding clothes to wear for Christmas, because my mom is much more stylish than I am.) I'm also wearing one of Kevin's parents' gifts to me; a brown choker made of small hardwood beads. Sadly, it's not so visible in the picture, but I do think it's very pretty. 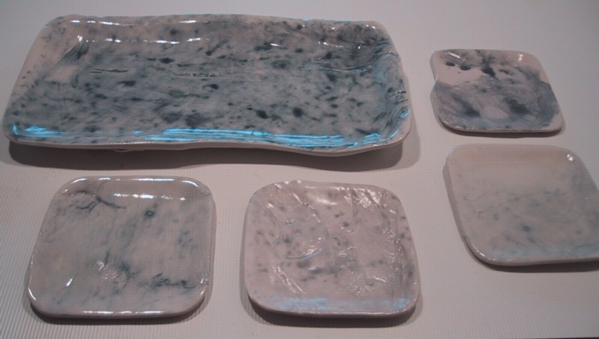 This was their other gift to me -- it took us a while to figure out what they were. When I described them to Kirstie on the phone, she said they sounded like sushi dishes, and indeed, that turns out to be what they were mostly intended for. A friend of Kevin's mom makes them for that purpose. But Kevin's mom uses hers around the house, to hold keys and such, and I think ours will mostly end up in the bedroom as candleholders. I think nice fat white pillar candles will sit very happily in them. And there are no candles in our bedroom as of yet -- a grievous oversight, which should be remedied as quickly as possible.