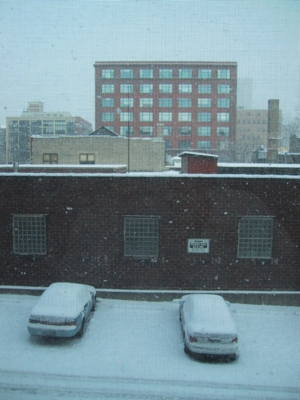 Oh the weather outside is frightful, but the fire is so delightful...

I started singing Christmas songs yesterday when I ran out to do some errands. It was snowing! I couldn't help it! They just bubbled out of me -- "Good King Wenceslas" (of which I really have to learn more than the first two verses), "The Holly and the Ivy".

And the rising of the sun, and the running of the deer
The playing of the merry organ, sweet singing in the choir

I love that that doesn't quite rhyme anymore. I gather in olden days, "choir" was pronounced a lot closer to "queer". Which also pleases me, but it doesn't mean I can bring myself to sing it that way now.

Anyway, I pledged Kevin that I would try to leave the apartment to him on Tuesdays, so I only have a few hours more in it (before he wakes up) to revise Kathryn (based on your wonderful comments, those of you who commented) and send it back to Duncan for final copyediting. There's really not so much to fix; I'm hoping to have it done by noon. Then a quick lunch, and head downtown (in the snow!) to Borders. I'll be working in the State Street Borders all afternoon, drafting the new book; Angeli's going to meet me there for foofy coffee drinks at some point. Ah, the life of the writer. Is good.

For many months, the poet had been quite content in her little house by the sea. She hadn't bitten her lips or chewed her nails, and her pencil had skimmed lightly over the dragon-scale paper. She had filled thick books with poetry, and filled bookshelves with the books. Sometimes she had sent a poem off to her kindly aunt, or to her bright young nephew, because it pleased them to be remembered.

They rather liked her poems -- but then, one's relatives generally do like one's poetry. They had bragged to their friends about their niece (their aunt) who was a poet. It made the poet a little uncomfortable, truth be told, when the waves carried back to her the whispers of her relatives, of their friends. Truth be told -- that was the problem. Was she telling the truth?