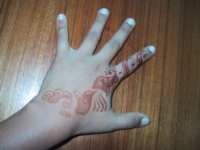 One dinner at my aunt's house (Friday) plus one dinner of pizza with the boys (Saturday) equals one extra pound I had hoped never to see again. Sigh. It could've been worse, I suppose -- I'm just not so likely to see 135 before WorldCon. But y'know what? I think I'm going to wear the sari anyway. :-)

Had a nice day yesterday, though I didn't work at all. In the morning, cleaned up, made fruit salad and hash browns. Friends (Shannon, Heather B., Aaron, Wes, Lisette, Caleb (Lisette's visiting cousin), Robert) started arriving around noonish, bearing food and providing good conversation. Most of them hung out until 4-ish; much fun. Shannon and Robert stuck around -- we took a walk outside, through a Greektown street fair. That's where I got my hand henna'd -- hopefully it'll last through the Hugo ceremony on Saturday (not so likely, though -- not for a $3 henna job). Then we came back here, played a few rounds of Family Business (gangster game), ordered stuffed spinach pizza from Giordano's (yummm...) and played a monster game of Talisman until 11 p.m. Lots of fun -- I haven't played Talisman in forever; I tried to play once with Paul and Marcia, but they got tired of it about halfway through, so we stopped. This time we ended up in a very close battle -- all three of us up at the Crown of Command, slugging it out. I've never had such a strong character before; I ended up with something like fifteen Strength (if I paid my mercenary) and eighteen Craft. Oof. (I know, this makes no sense to you if you haven't played Talisman. Forgive me. We're done now.)

Lots of fun, but now back to a more disciplined regime. Back to yogurts and tea and one real meal a day -- and none of that gooey cheesy stuff. :-) Back to exercising, perhaps. Back to exam list reading -- last week, I read the first book of the Morte d'Arthur -- it took forever! I love Arthur, but there's only so much smiting a girl can take, y'know? So I plugged through that book, but decided I could take a break from it before going back for the second book (which promises to be more depressing too, given that we're getting to the actual Morte...). I'm re-reading Bharati Mukherjee's The Holder of the World -- it's on my exam list, and while I've read it before, I only remembered it vaguely. I had entirely forgotten the whole early America connection; this book actually should make a really nice bridge between the post-colonial theory stuff as it pertains to America as well as India.

It's weird, though -- I remember when I first encountered Mukherjee, I was really impressed by her. I'm enjoying this book, but I keep feeling like it's kind of clunky writing -- competent and all, but nothing special. And I don't know that her thinking is all that sophisticated or complex either. This woman teaches at Berkeley, y'all. I want her job. I wonder if there's any chance I could get it someday...

Reading it is making me want to work on my thesis stuff again. That's a good thing. I haven't even approached it in many months.