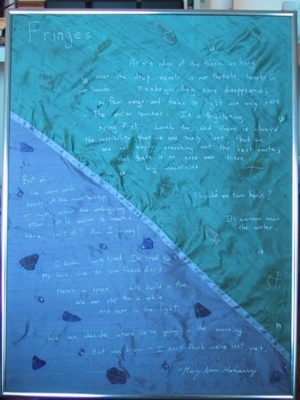 I actually made this...oh, a month or so ago, I think. Just didn't get around to putting it up until now. It's really unlike anything I've ever done -- a large silver frame (18x24) enclosing silver writing directly on Thai shantung silk, with little sparklies and beads and sea glass sewn on by hand. Also a ribbon. I've actually done a collage with this poem before, and sold it too, but I was never really happy with it -- it was one of my first collages, and I really didn't like the cut edges of the paper and the overall look. I'm much happier with this version -- it seems much more suited to the poem. The fabric suits the title, and the first line -- "At the end of the fabric we hang...". And the second part is about being on a cold clear mountaintop under the stars; I like how the sparklies and sea glass seem to carry some of that feeling.

I'm not sure I'm entirely happy with it all overall; it seems odd to frame fabric, for one thing. I could've made a pillow or something of it -- but that wouldn't really work, since the sea glass would just come off if it were being tossed around and lain on and such. Maybe quilting it would've been the right approach -- putting some padding under it and a backing, and maybe a rod at the top, so it could still be hung, but hang more loosely? Hmm...I'm a little too lazy to do that now, but if it doesn't sell as is at WorldCon, maybe I'll try that before the next convention. Lemme know if you have an opinion on that.

Either way, a fun experiment. And made entirely from items I had around -- the purple silk is left over from the skirt I made for Arthur's wedding, and the blue-green silk from the French blinds I made for our closet. I may do more with fabric in the future. 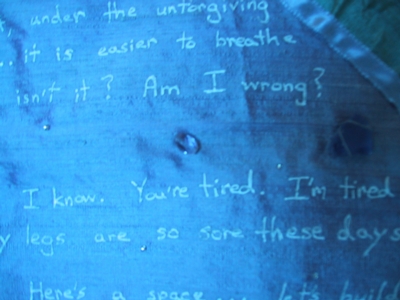