I forgot to note that at last part of the reason I don't usually tell people I'm trying to lose weight is pure ego -- a different kind of ego, the kind that reflects on my personality (not my appearance). I don't like failing at things. I really really don't. That F in freshman Calculus still grates on my soul, after more than a decade. (Sometimes I can laugh about it, but not always.) I also don't like *admitting* I failed. There have been plenty of times in my life where I've tried to lose a little weight, but I've generally not mentioned it to anyone, because I don't want them to know about my lack of willpower. At least if I'm not announcing that I'm trying to lose weight, I can pretend that people believe that I just don't care... If I think about this for any length of time, the whole little self-delusion kind of falls apart. But it remains the truth that it took several months of steady weight loss, a record of some measurable (and apparently fairly reliable, since I survived the holidays unscathed) success, for me to be comfortable talking about my attempt.

I guess this is a pattern in all of my life -- when I first decided to really take my writing seriously, that was terrifying. And I admitted it to myself long before I really admitted it to anyone else. I was talking to Kevin last night and at one point he asked what I'd do if I never did manage to publish in any literary magazines, if I didn't get any critical mainstream acclaim -- if I remained a successful erotica author, and nothing more. I didn't know how to answer his question. I suspect I'll have a major life crisis if I ever have to accept that. Because it will have meant that I've failed at something I really, deeply care about.

Which I felt a little of when we broke up, in fact, now that I think about it. Which is just silly, since that's not what relationships are supposed to be about.

Please feel free to send in further comments on the whole weight/beauty thing -- I'm finding them really interesting. M'ris said that I could post some of hers here -- she's said some of this in her journal before, but I'm not sure all of you read that, and there's a part I want to emphasize:

"I was, at one point in my illness, clinically underweight. I had always believed that for every bone structure and weight distribution, there was a size at which someone would be too thin or too fat to be at their optimal attractiveness. I woke up one day in October or so and could *see* that I had gotten there. It didn't surprise me that I'd gotten there, in retrospect -- it surprised me that I could see it on the thin end. Which is a pretty sad statement, I guess.

"The upsetting thing is that it recalibrated my internal scale, so now I feel quite pudgy, even though I know that I'm just at about the same weight as I was before. I have to fight it every day. I know that it wasn't more beautiful to anyone, and I'm glad that I'm not clinically underweight any more--but it's hard to make the revelation stick. It really is. It's much harder to have standards that have nothing to do with other people, because they can move around more without you noticing. Ick. Don't do that if you haven't started--it sucks." (emphasis mine)

M'ris is *so* not pudgy. If you haven't seen her, she's tallish and quite slender. When she had gotten to that clinically underweight part she describes above, she didn't look good -- she looked frail, a little wasted. She was cracking ribs when she coughed because her body was so lacking in supporting muscles. Very not good. I think it's fascinating that she knew this, and that nonetheless, her internal scale has reset to include that over-low weight/body as part of her image of a beautiful self. We're all so weird...

I emphasized one sentence of M'ris's above because I think it neatly encapsulates something I also believe about beauty. That for every person, there's a particular weight range at which they look most beautiful (and that that weight range may change over time, as the body changes in other ways). And that's what I'm striving for in myself -- not a set weight that the doctor says is ideal (though perhaps that might be the healthiest option), nor yet a society-imposed body type...because I'm perfectly comfortable saying that I want to have a body more like Catherine Zeta-Jones than Calista Flockhart. Just to look like my most beautiful self. Which includes various criteria -- healthy weight, some exercise, enough sleep, eating well, washing my hair once in a while... :-)

And maybe carrying a sword. 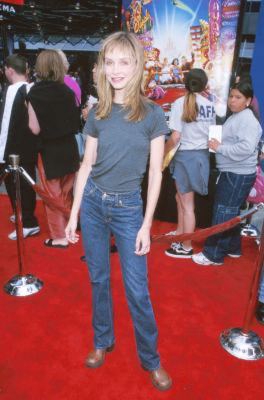 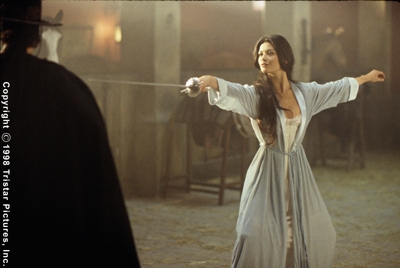 (Okie, this is a bit of a cheat. There are photos where Calista looks a lot better than she does in this one. But she's still thinner than I ever want to be.)

1 thought on “Some more thoughts on…”