Facebook Instagram Youtube Twitter Patreon Shopping-bag
Menu
When we left off, we were heading off to a party, yes? I think so. Well, it was a fairly typical convention room party -- until the hotel staff came and told us it was too loud and was bothering people. So they asked us to move to the sixth floor -- outside, by the pool. :-) Much larger nicer space for a shindig -- great fun. After an hour or so of chatting, I went and changed into my suit (of course I brought my suit -- it was a hotel...which hadn't seemed to occur to most of my friends) and got into the jacuzzi. Ah, leaning back in the water, looking up at the clouds racing across the sky. That was truly lovely. I ended up talking for a while to Michael, someone who also did his undergrad at the U of C (six years after me); we got into an intense discussion for a while of post-colonial theory. He was hell bent on convincing me that I really ought to be writing the stories of the unrepresented Sri Lankan underclass, rather than the upper class. I eventually managed to convince Michael that it wasn't so unreasonable for me to at least start by writing what I knew...I think I convinced him, anyway. Fun discussion. Much tossing around of Marx and Spivak and Bhabha and Said and Foucault and even a tiny bit of Derrida...was so nice being able to actually apply some of this stuff to real world concerns.

The party broke up around 2, and I thought about going to bed, really I did. Instead we (along with a friend of his) wandered down to the French Quarter for a while. Seemed a shame not to, on my last night. But we didn't gather more beads (once was enough), and neither did we drink. We ended up going back to the hotel, where his friend (who was fairly drunk) went to bed, and we stayed up talking until 5. Eventually, I went back to my room, changed and climbed into bed -- only to have Samantha come in five minutes later. Heh. Welcome to New Orleans.

We got up around 10ish yesterday morning, packed up, checked out of our room. I left my bags with the nice hotel people, and then walked through the book room, collecting literary magazines (the Kenyon Review, the Mid-Atlantic Review, the Gettysburg Review, Black Warrior Review, Crazyhorse, and a few more...), some free, some very cheap. Now I just have to read them. Had particularly nice conversations with the editors of the Kenyon Review, Black Warrior Review, and Fourth Genre. Need to send them stuff at some point. Need to write and revise stuff first. 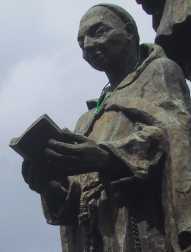 When I was done with that, I watched the Utah table for a while, then walked down to the Quarter. I had about two hours before I needed to leave for my plane. Plenty of time to be a tourist for a while, enjoying the man making balloon animals, the stores selling gorgeous masks (and other stores selling cheap ones), the fortune tellers with their tarot cards, the sober statue dressed up with a string of green beads. Plenty of time for a beignet and cafe au lait lunch at Cafe du Monde. I figure it's okay to have fried doughnuts covered in powdered sugar if you walk many blocks to get them and many more blocks back. :-) 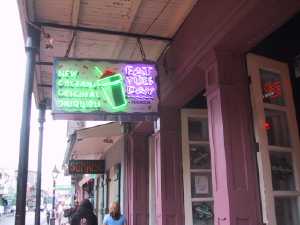 I ended up giving one of my beignets to a silver street performer anyway, so it wasn't so bad. Lovely walk back, with a few photos along the way. This is the place where we all kept stopping for daiquiris and other drinks. I would have taken more photos, but as I passed this place, it started to rain. I put away my camera, and it rained harder. Within a block, it was pouring, the rain coming down in huge sheets of water, almost as fiercely as in a monsoon (with less wind). Everyone was huddled under balconies, but even if I'd wanted to, I couldn't afford to stop and seek shelter -- I needed to get back and catch the shuttle to the airport. And honestly, I didn't want to shelter. It had been sticky and warm -- the rain was delightfully cool and it was just wonderful getting drenched and walking in the rain, still sipping my covered cup of cafe au lait (with lots of sugar). I was probably grinning like a fiend. Various men told me I was "looking good", and a very attractive man carrying a huge black umbrella leaned towards me as I walked past, and said, "Honey, you must really like the rain." Yup, pretty much.

A fabulous city to visit, though I probably wouldn't want to live there. Relaxed debauchery, beauty and grime intermixed. Shopkeepers sluicing piss and vomit off the streets. Trees covered in glittering beads. Alcohol at any hour of the day -- and beignets too. Tourists being taken for every dollar they have...and loving it. Cool jazz. Sunny humid days. I'll come back to New Orleans again sometime, if I can. 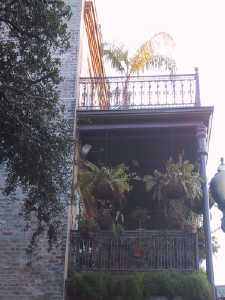