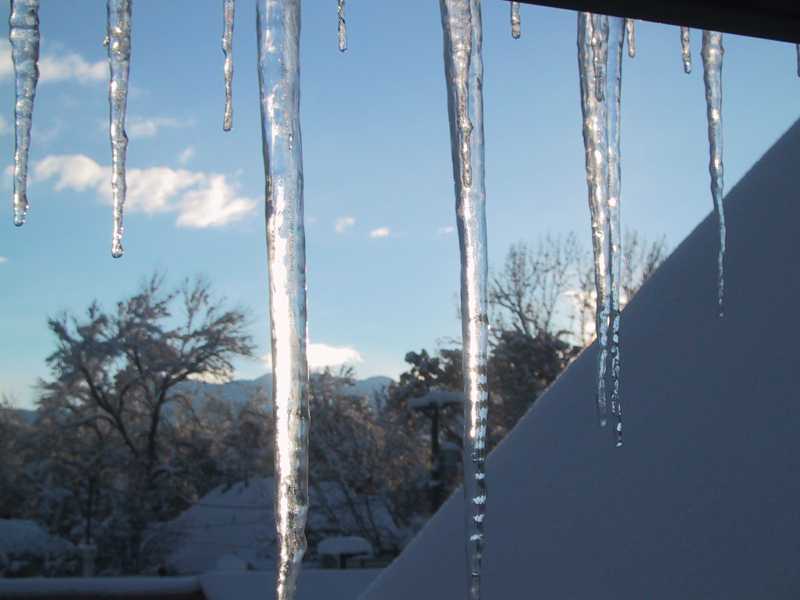 I love icicles. When I was a kid, waiting for the school bus, I would break them off and suck on them. It didn't make a lot of sense -- I was already cold, and they just made me colder. And as my mom said, repeatedly, they were probably dirty, since they were composed at least in part of whatever had dripped off the roof. But they didn't look dirty -- they looked clean and shining and bright and more than a little magical. I loved sucking them, and those of you whose minds leapt to thoughts of where this type of pleasure may have led can just keep those thoughts to yourself, thank you kindly. Is nothing sacred?

So far this morning, I've drafted a letter to be sent to the conference participants regarding next year's conference. I'm not sure I mentioned that Paul and I are interim co-chairs? Handling the transition at least, and quite possibly chairing next year's conference. It's a big deal -- a fair bit of work, much more than I put in this year. It also means that I can't run away from Salt Lake next year, which I had considered doing (since I won't be taking classes). But really, it makes little sense to go away, since unless I'm lucky enough to win a fabulous fellowship, I'll really need to teach in order to pay my rent. If I went elsewhere, I'd just have to work a lot more hours in order to pay rent, which wouldn't be at all conducive to getting my reading done in preparation for my exams. So unless something shifts radically (always a possibility), I'll be in Salt Lake for at least one more year. And if I'm going to be here anyway, I might as well organize a large interdisciplinary conference, right? It's not like I have anything else to do with my time... :-)

Speaking of which, gotta go. I really *have* to finish revising the intro to Wet this morning and send it off, dangit. I've been putting it off for too long, and the rest of the book is at the copyeditor's now. Have a good Tuesday, munchkins...

10:10. Ugh. Once I showered and dresed, no time to finish intro. I've had to stick it in my UNIX account, with the hope of revising it after my afternoon class; I have a couple of hours between that and my evening class, and I think I'll just stay on campus and work. On the plus side, I look pretty today. :-) I'm wearing a thin clingy black shirt under a long deep purple dress, of a wonderful soft suede-ish material. Black tights and my stompy black boots make me feel fully prepared to face the snow. Winter chic. I rarely feel anywhere close to chic, so it's kind of a thrill when I manage it. Of course, no one else may agree with this assessment.

I have five minutes before I go catch my bus -- five minutes isn't long enough to do anything. If M'ris had updated her journal, I could read that while drinking my tea, but sadly, she is laggardly this morning. I shouldn't complain, though -- she actually updates every day, which, amazingly enough, I've managed to do this month, but it's not as if I manage it often. I've been tempted to join Jette's little Holidailies ring (promising an entry every day in December), but the odds are so slim that I'll actually manage it; I dunno. I'm not sure she's still accepting people in any case. Hmmm...

In other news, a change of plans. Did I mention that I was going to stop in Chicago on my way to the East Coast for Christmas? I decided that with all the Xmas presents I was making for my family this year, it really made more sense for me to stay here with all my supplies. So Kev's coming here instead; his semester finishes earlier than mine, and he'll actually be out here from the 11th to the 22nd. I leave for the East on the 23rd (at 7 a.m., oof. His flight is at 10 p.m. on the 22nd...a shame we couldn't coordinate airport travel better. Ah well). So he'll be here eleven days. Presumably, that'll be fine. We're still the best of friends, after all. Fingers crossed.