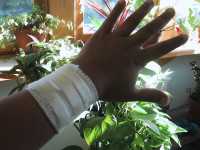 Hey. So, after I burned my arm cooking yesterday, the day went a little differently than expected. Michael (my landlord) brought over an ice pack -- much appreciated, since I'd defrosted my fridge just a few days ago and had no ice! My arm was hurting enough that I couldn't really leave it off the ice for more than a few minutes at a time; that made it impossible to really work at the computer, since I also didn't want to drip water all over it. I had been supposed to work with Paul on campus on food committee stuff for the conference; I called in, spoke to Pam (because the secretary connected me to the wrong office) and left a message for Paul about the burn and my inability to come in (esp. lugging a massive ice pack. :-) So Paul kindly did the conference over the phone with me; we managed to get enough done that he was prepped to talk to the main committee at the 5 o'clock meeting. All well and good.

Meantime, I'm at home, going slowly nuts with boredom. The ice pack is large, and I basically have to sit in one place with my arm on it. There is nothing useful on tv -- only old Bill Cosby routines, which were maybe funny the first ten times ("and that's why I say that children have brain damage!") but not anymore. I can't concentrate enough to read. Two hours pass, in frustration.

Then Paul and Marcia show up for dinner and Enterprise, and Pam stops by with Bactine and bandages and cloth tape, to be used as above. Much appreciated -- the Bactine is an anesthetic as well as an antiseptic, and once I had it on, the burn stopped stinging, and I was able to move my arm off the ice pack. Yeah! Marcia made yummy green beans to go with my rice, and we poured some wine and cheerfully settled into watching Star Trek. The day had gotten much better. :-) The episode, btw, was generally pretty decent. It's true there was some gratuitous nudity, but I have no real problems with that. The communications officer squeals too much, but at least she actually got to do some real work too. The opening music was miserable; maybe if enough of us complain, they'll change it? But generally, I'm quite hopeful about this new series. It may take me a while to sort out who is who, though -- a lot of the guys kind of look alike.

This morning, I'm mostly trying not to be irritated by the bandage. My arm doesn't hurt except when I get it near heat (showering was a bit of a nuisance), but I think it's probably good to keep a bandage on for one more day. This means that I have to wear my watch on my right arm, which is actually driving me crazy; I'm not used to having anything on that arm, and it feels like little ants are scurrying around my right wrist. Ick. But I need my watch -- when you're teaching, you need some way to tell time. Kevin apparently has put his syllabus and day-by-day assignment notes on his Visor, so he always has them with him in class, and has set it up to beep at him when class is over. This is just a little too geeky for me at the moment, but I do find it rather charming in him. :-)

Anyway -- off to campus. Some poems to comments on, then more discussion of Hobomok, then discuss character with my students, then Derrida and the concept of 'differance', then a departmental meeting about funding (oh joy), then two hours until my reading. Two hours is sort of the worst amount of time to decide if you're staying on campus -- it'll take about an hour to go home and come back, so you can have a harried hour at home, or a somewhat boring two hours on campus. Decisions decisions...

Wish me luck with my reading! I'll be reading "Monsoon Day".