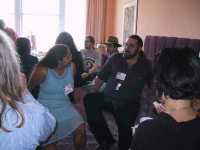 I meant to add a few WorldCon photos yesterday, but didn't get around to it. That's just the crowd at the tea party, with me in foreground with John Teehan, I believe -- the be-hatted guy behind John is our own Will, as described yesterday. I should have taken more pictures; I didn't get a very good one of Will, and I didn't do much better with Sunita, as you can see below. But I was pretty busy being hostess. What I really ought to do at these parties is find someone willing to take snapshots all through it, and then teach them how to use my camera. Jed and others took some, but having someone dedicated to that would be ideal. Not that they wouldn't be also allowed to talk to people if they wanted to. :-) 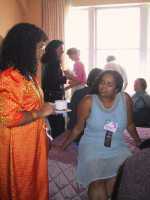 I'm feeling much better, if not wholly recovered yet. Only coughing a little, and the weight of frantic work has fallen off a bit. I'm almost caught up -- I have to swing by King's English (bookstore) tomorrow and pick up a book and read it, and then I'll be back on track for the semester. Oh, and finish commenting on some poems. I could do it today (which would make more sense, since the buses run more frequently on weekdays), but I'm taking the day off and remaining in my pyjamas -- the weather has suddenly gotten cool enough to justify flannel pj's, and I am determined to take full pleasure in that by staying in them all day. I *could* go down to the bookstore in them -- they're certainly modest enough, and I don't think anyone would stop me. But people would look at me funny, and honestly, I get enough of that already, just living in Salt Lake.

It's actually rather nice being back. I'm starting my third year in my apartment (!), and now that the evil sublettor's stuff is gone, it's really a very charming place. I have a few last pictures to be framed (oh -- need to swing by art store and get glass and do-it-yourself frames, right), and then I think I'm going to be pretty much officially done here. Plenty of furniture, plenty of china, nice nooks for reading and watching tv and studying, lots of blankets (hey, Shmuel -- what you should do is toss a blanket or throw over that armchair to hide the torn spots...) to curl up with, thriving plants and extra pots in case I want more -- it's a home, y'know? Not just a student apartment. Took me a while get it here, but boy, I like it. A refuge to come home to after long days. I just need to go pick up a nice stash of candles at Pier 1 to last me through the winter (they have really nice simple tapers that last a long time and don't drip...).

Two nights ago, you'll remember that I mentioned a thunderstorm -- well, that continued through the night, intermittently (and I left the bedroom window open and let great gusts of wind and light rain come in :-), bringing cooler weather yesterday. I wore a black cardigan and my red plaid pleated skirt, black knee-highs and cute black shoes; it was so nice being able to wear some of my fall clothes. I was even a little chilly, but in a good way, in that crisp air in your face, find a patch of sunshine to stand in sort of way. The crispness of the air is making me feel energized and excited about the school year; let's hope it lasts!

I did goof off a bit last night -- some of the grad students (not quite the usual crowd) came over for poker! Mostly hold'em, at which I lost a few big hands, so that I was about $17 down by the time we switched games...but then we changed to Omaha, at which I quickly won two big hands, leaving me only down $3 when we finished for the night. A good time had by all, I think, and I don't think I actually made any mistakes in play -- just some bad luck with people getting hands that were just enough bigger than mine to beat me. Ah well, it happens.

Gonna go goof off some more -- maybe even put on socks 'cause my toes are cold. Make a nice cuppa tea. Re-read some Miles Vorkosigan. It's just that kind of day...