Facebook Instagram Youtube Twitter Patreon Shopping-bag
Menu
Hey munchkins. Still a little buzzed from writing a story yesterday, although now that Jed's given me a detailed critique (mostly accurate), I have a bunch of fixing to do on it today. Basically, it seems to work, though, which is most pleasing.

I need to do some BW stuff; the rest of the day will be spent reading through The Vintage Book of Contemporary American Short Stories. I started it yesterday, and so far, am enjoying it muchly. It was a little funny to read Susan G's recent panicked wail on the subject of not being familiar with contemporary American fiction; I'm in the same boat, but somehow, it doesn't stress me out. Even though, as a Lit/Creative Writing Ph.D. student, I'm *really* supposed to know this stuff. Last summer I focused on reading contemporary South Asian authors, and got pretty caught up on that kind of thing. This summer, I caught up on my spec fic, and am feeling like I've got a decent handle on what's going on in that field. So now, I'm diving into contemporary fiction, starting with the short stories and working my way outwards.

I'm teaching creative writing this fall (I was originally scheduled to teach in the spring, but they called and asked me to switch), and I wanted to think about whether I wanted my students to do some reading along with their writing. Paul recommended several titles to me, so Susan -- this may be a good start for you, if you're interested. In addition to these, I really enjoyed the short fiction of Alice Munro and Lydia Davis (Break it Down); I think David may be a big Lorrie Moore fan, whom you could borrow titles from.

I particularly enjoyed yesterday a story by Mary Gaitskill, "A Romantic Weekend". A couple goes off for an S/M weekend, and it really doesn't go as planned. Darkly hilarious. Before I start the BW work, I think I'm going to make some tea and read another short story. I read a few before I started writing yesterday, and I think they helped me keep my prose nice and spare; many of these writers have a very clean prose style.

Oh, and a quick note -- had a lovely dinner with Zak and Sharon last night. Sharon and I shared summer rolls, then I had chicken prik khing (green beans, red curry paste -- one of my favorite Thai dishes, though I do prefer it when they make it with long beans) and she had cashew chicken. Zak had rice. I'll let him explain that. They came back afterwards, and hung out until late. Much fun.

10:20. Because Jim asked for a poem, and for Jed, who likes rhythm and rhyme.

Listen to the motion of the speeding train --
our compartment fills with rattles in the night --
it seems that we are falling from a shattered height,
and the fields are crushed beneath a pouring rain.

We've reached the forking of our path again,
my dear; to another this decision's surely trite.
But the road they know is far behind, not right
or left, and their losses never did outweigh my gain.

I have no interest in recounting aches and pain,
would rather wander in the gardens of delight;
and if memory paints some darknesses as over-bright,
it is still my choice to take the rightmost lane.

The train has slowed, the fields are full of grain;
and the wind is dancing lightly through a spinning weathervane. 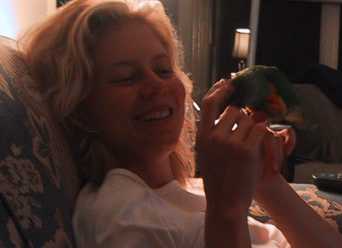 1:00 p.m. Read some more, edited some photos, back to BW now. But first I must show you cute picture. Lisette has two cats (Jake and Bud), and a bird (Scout). And some fish. And lots of plants. But this is a picture of the bird.

3:30 p.m. Sorry for all the scattered updates today; just that kind of day. I spent a little while making Jed's suggested revisions to "Beth and Julie's Wedding" -- I'm now very happy with the story. On Friday, I'll talk to Duncan and Andrea and see which (if any) of my stories they want to use for BW. The contenders are:

I'm feeling much better about the book. It's now pretty confirmed that we have a Big Name Author (TM) in the collection, with a story I really like. Not absolutely confirmed, so I'll have to wait a bit to tell you who. But the story is utterly charming, and I'm feeling particularly pleased with myself for getting it because it took great persistence on my part to coax a story out of the author. Yay, me! Also the Crown editor likes many of the stories we sent her in the first cut, and we may be able to talk her into the others; I'm feeling much more confident that we'll actually be able to put a book together that we're all happy with. I feel bad that I've had to keep so many authors on hold for so long -- it's at least in part because the Melcher people have been scrambling for a big deadline on another book, something I had little control over -- but on the other hand, I probably could have been less lazy about getting some stuff done. I really don't like cold-calling authors/agents I don't know and trying to persuade them to write something for me. Sometimes it works, but mostly it doesn't, and it's just tough. "Mr. Amis, would you consider writing a smut story for me? Pretty please? Yeah, I didn't think so...sorry to bother you." :-/

Anyway, most of that is done, and now we move to making the final calls and then doing line edits. I really want to coax Jed to do line edits for me again, like he did last time. But he has no time, and honestly, I can do a decent job -- he just does a better one. :-) The timing is going to be a bit tight; I go back to Utah 8/17, and start teaching and taking classes again the next week; the last two weeks in August are going to be a bit frantic, I think, and capped with WorldCon -- yeesh! But I've had a very lazy summer, and I feel pretty well rested and almost eager to dive back into it all again. Just take a deep breath, and remember to keep kicking...