Facebook Instagram Youtube Twitter Patreon Shopping-bag
Menu
Well, it's the morning after, and I'm feeling a bit blue. But I do want to take a second and thank all of you again who sent birthday e-mail, and silly poems, and sweet poems, and virtual flowers and balloons and cards and even the teddy bears. Thank you. They were lovely. 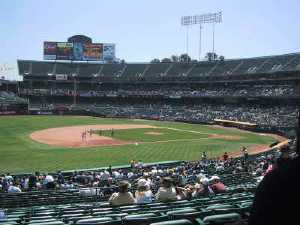 M'ris does a better job than I ever could of describing the baseball game. It was fun; I had a good time. I don't see myself becoming a rabid baseball fan, but I could go to a game again, and enjoy it. I think what I liked best was rooting for the underdog. Minnesota got an early lead, and so the Oakland fans were on the edge of their seats periodically, watching for the hit that could turn the tide of the game. Never happened, but was fun hoping for it.

David made me his signature pasta for dinner, which was lovely; I also did a little cooking prep for Saturday's picnic party. More of that today, which is good. Cooking is soothing. There were many happy birthday phone calls throughout the day -- one was from Alex, who is going to be out here visiting his girlfriend Yuko, and thus can make the party; that was great news. It'l be so good to see him. I had nice conversations with my folks (which is still rare, so to be valued) and my sisters. Karina called, which was delightful (I should have stayed on the phone with you longer, chica.) Kevin called in the morning from France, but I missed the call -- had somehow turned off my phone the previous day. I was simultaneously glad he called and sad to hear his voice. I got pretty mopey in the evening, due to a combination of things that I don't think I want to go into right now. So the end of the day wasn't as good as one could hope for in a birthday. But then, given the circumstances, that was probably to be expected...I'm glad so much of the day was pleasant, at any rate, and I'm looking forward to tomorrow.

4:20. Finished making curry buns, and am most of the way through fish cutlets. This is the sort of food that we always made for birthday parties when I was growing up -- tons of appetizer/snack things, so that everyone filled up and then groaned when dinner arrived, because they really were too full to have much of the delicious curries. Every year, my aunts and mom swore that they would make fewer appetizers...but they never did, because the appetizers (known as 'short eats', which I thought was 'shorties' when I was a kid) were everyone's favorites. So making this food makes me feel like tomorrow is actually my birthday. :-)

Okay...gotta go fry some cutlets, and then last bits of present-finishing-and-wrapping...