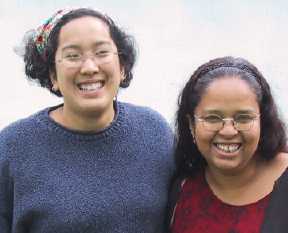 That's my friend Carmela. I stayed with her the first night I arrived in Madison, before the convention started. It was the second time I'd seen her since our high school graduation, back in 1989 (we'd met up briefly in the Bay Area once). It was our first chance to really talk in twelve years. It was wonderful -- and I hadn't expected it to be.

When I first realized she lived in Madison (has for many years, as it turns out), I was a little hesitant about contacting her. Oh, I'd been sending her Christmas cards for years, but it had been a long time since we'd really talked. I wasn't sure she'd even want to hear from me. I couldn't remember if she had a partner, or was married, or even had kids. I used to keep in pretty good touch, but I've slipped a bit the last few years. And to be honest, in high school, we were sort of peripheral friends. We spent a lot of time together, but it was because we were both good friends with Lisette. Carmela and Lisette roomed together for two years of high school -- I was Lisette's day-student friend, who hung out 'til late at night (because it was more fun studying with Lisette than going home to work alone) in their room, so that Carmela was always tripping over me and my books. She was mostly very patient with me, though one time, she lost her temper. We got over it, though, and on the whole, we had a very friendly relationship. But we weren't really close friends. We didn't spend a lot of time confiding our hopes and dreams and fears. We just hung out.

She seemed happy to hear from me when I e-mailed, and we made plans for my staying two nights. As it turned out, various things kept me here one of those nights, so I ended up not going up until Thursday, and only staying the one night with her. I was a little relieved when I realized that would be the case -- what if we didn't get along? Two nights of awkwardness would be much worse than one.

And when I arrived, it was awkward. We had a late lunch at Buraka -- mediocre Ethiopian food, but I was so craving injera that I didn't care. I was upset to realize that not only had Carmela gotten married without my noticing, but that she had been to the wedding of Katy Jennings -- who had been another day student, and a closer friend of mine. I had really lost touch. I thought perhaps I'd received a note from Katy, or even an invitation, but I wasn't sure. As we talked, catching up on various old friends, fixing their new positions in our minds, I felt mostly sad, and disconnected.

I split off for a bit to do packet stuffing (SH flyers in the convention packets) and attend the opening reception. I got caught up in seeing old convention friends; I was having fun when Carmela called me to tell me she was ready to meet up again. I tried to be enthusiastic about meeting up with her again. I met her husband, Dan, at a cafe. He seemed very cool -- with jingly things on his jacket, and a plan to go practice juggling with his troupe. He managed a bookstore by day, and juggles by night. Very cool. That was a promising sign.

Then we went to her house, and it was then that I started really relaxing. They have a beautiful place -- a double lot with tons of garden, irises shooting up all over. They've redone much of the inside, and it's full of cozy nooks, warm throws, and many beautiful things. Dan, it turns out, makes gorgeous little art pieces out of metal (and sometimes bone). He has a studio in back. Carmela works in fabric -- she made her own wedding dress, a medieval-style in raw silk, and vests for the groomsmen. She does quilts, and works in lovely fabrics. And as the evening went on -- as we chatted, then went out for delicious Laotian food, then came home and chatted some more, until sometime in the wee hours, I realized that I liked her very much. That I would love to spend more time with her, that I felt like I'd discovered a kindred spirit, in this person I'd known for more than a dozen years. We talked about love and travel and children and careers, about hopes and dreams and fears. We made plans to see each other next year at WisCon, at the very least, and hopefully earlier. We talked about possibly even writing real letters. We're going to stay in touch. I'm not quite sure if I've made a new friend or rediscovered an old, but in either case, it's wonderful. 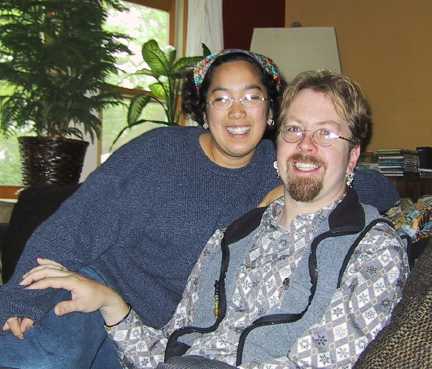