Facebook Instagram Youtube Twitter Patreon Shopping-bag
Menu
Hey, guys. It's been an oddly busy couple of days -- just lots of random stuff to do, making it hard to find time to sit down at the computer. I'm pretty behind on e-mail too, and likely to get behinder, as I have so much stuff to schlepp to WisCon that I've decided to leave my computer behind. I'll be able to check e-mail on Jed's machine there, but probably won't be on for long, so anything sitting may well sit 'til Tuesday. Just so you're warned.

I've also not really wanted to post for a bit -- I got hit with some bad news early this week, and it's taken me a little while to process it. It turns out that Eric, my sublettor? He's a con artist. He bounced two rent checks, and then my landlord called up his previous landlords and found out that he's been dodging rent payments by pulling this sublettor scam all over. I've been having a hard time bringing myself to deal with this, to be honest. They're taking him to court, which is good -- we may recover the $2000 he pledged to pay in rent this summer. But they may not, and in the interim, I'm responsible. It's a hunk of money I hadn't expected to pay out, and while I can borrow it from friends, it makes me feel kind of sick. It's a good thing I have some comfortably-well-off friends, though. I should be grateful for such blessings.

More nerve-wracking, actually, is the question of whether he's stolen anything from my apartment. My landlord changed the locks a few days ago, so whatever's left is good. And I left my good jewelry with Paul and Marcia before I left, thank god. My mom would have killed me if I'd lost that stuff. There's not much valuable there, to be honest -- oh, he could have carted out all my books and pots and pans and clothes in the dead of night and sold them for a pretty penny, but I doubt he bothered. So there's a big tv, and a vcr, and my printer, and a cable modem. Maybe a thousand dollars worth of stuff, max, that he would have been likely to steal. I should send Paul and Marcia over to let me know the damage, but I don't have the nerve to face it yet. Soon.

I also have to find someone to water my plants and feed my fish for the rest of the summer, if they're still alive (he said he'd do it, but I have no faith in that promise now, of course). Another thing I can't cope with yet. Very soon, or it will become a moot point.

I'm just feeling slammed by the whole thing, y'know? He came to dinner, he seemed really nice, my friends liked him -- Kevin says that's what con artists do. I guess so. I just feel like an idiot -- I should have gotten a check from him and made sure it cleared before I left town. Things were just so crazy then.

Let's look at art instead, eh? I've been running around like a loon, making collages for WisCon. Good art therapy. Here are the recent additions -- I'm sorry some of the detail photos are fuzzy. I was very tired when I took these last night. 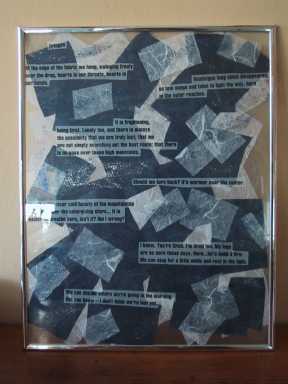 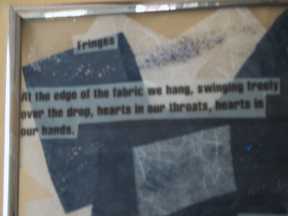 To be honest, this is my least favorite collage so far. It's aesthetically okay, but in the end, the combination of cut paper and silver and cobalt glitter didn't excite me. I do like the poem, and I think WisCon people might particularly like "Fringes", but as art...I dunno. I think if I were redoing it, I would tear the paper for the text, and I would use less background paper, allowing more light to come through. This one doesn't really take advantage of the dual glass effect -- it might as well have been on a solid background. 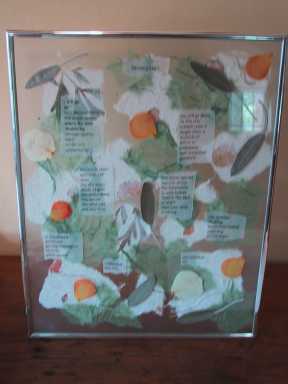 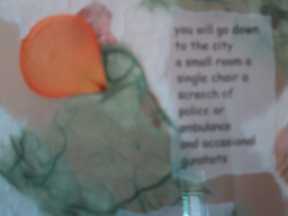 I like this one much better (though I appear to have photographed it at an odd angle). The balance of space and material feels right, and the sage leaves and rose petals layered on top of the glass (the rest of the material is under a layer) add a nice visual punch to the piece (and feel good to the touch). I also like the combination of the two papers -- one thick, infused with plant fragments, the other thin and delicate, almost feathery. 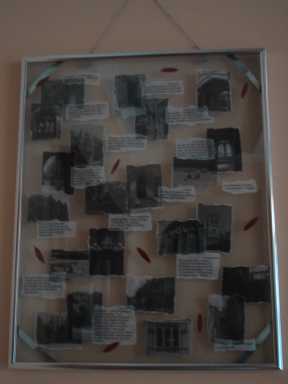 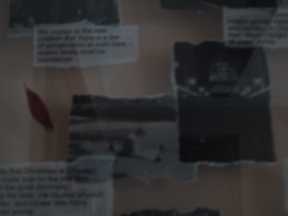 You can't really tell size on these photos at all, can you? The previous two were 8x10; this one is double that size. It's the most professional of the ones I've done, and the one that feels closest to real art. The materials are sandwiched between two sheets of glass; the finished piece is very solid, heavy. The photos are the ones I took last week of the university; many of the places represented are places I have fond memories of. But they're also characteristic enough of the university that I think a lot of people who know U Chicago may find that the work makes them nostalgic. I hope so. The Gerbera daisy petals worked especially well, as the school colors are maroon and white (I thought of you, Karen!). I originally had the piece in a black frame, but the switch to silver lightened the piece, and I actually think the triangular framing pieces add to the overall effect. A very pleasing piece. 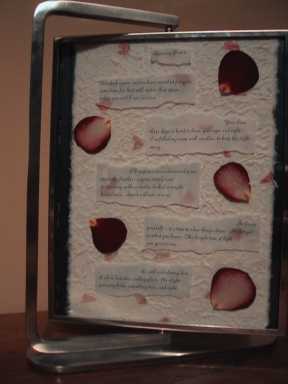 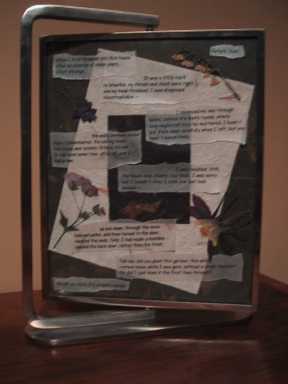 And this was just fun. I bought this spinning frame at Crate and Barrel for $40, which felt very extravagant -- none of the other frames cost over $20. But it was fun thinking about which two poems would suit it -- "Spinning Down" and "Return Visit", both love poems with appropriate titles -- and then trying to create harmonious yet different looks for the two sides. I went with a fairly formal look for "Spinning Down" -- an elegant font (Park Avenue, I think) and dark rose petals, for a sonnet. "Return Visit", on the other hand, is a free verse poem about the discovery of a garden, and I wanted a wilder feel to it -- yet not so chaotic that it clashed with "Spinning Down". I'm very pleased with the final result, and I hope someone else will be too. :-) I particularly like spinning the silly thing.

Any that are left after WisCon will go up for sale on my pages; I'll also probably be dragging them to WesterCon. Though with luck, they'll all sell, and I can bring entirely new ones to WesterCon. :-) 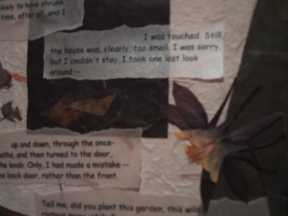 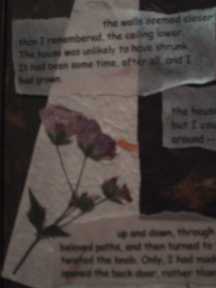