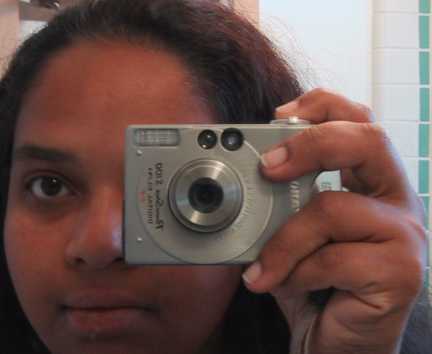 I dyed my hair (rosewood) about a week ago...I meant to get a picture up sooner. It's too bad I didn't, 'cause it's already fading. But it still looks kind of cool in person. I tried dying my hair once before, and it didn't really pick up the color at all. Black is black and black it will remain. But I left it on longer this time, and not only did some of the black pick up a little sheen, but all the silver hair that got coated with dye (I didn't do the most even job in the world) definitely turned red. In a few weeks, I may take another stab at it and see if I can get all those other silver hairs. It's kind of cool -- it means that the more my hair turns silver, the more color I can put into it. When I'm sixty years old, I can make myself a real redhead! :-)

I do like my black hair -- it's probably my best feature. I've just been living with it for a really long time now. Sometimes a girl needs a change.

Thanks for the messages of support about the driving. I did feel a little mopey and inadequate yesterday, so it was nice to hear that not all of you did it on the first try -- one kind soul wrote in to tell me that it took her six(!) tries. Unfortunately, I only have time for one more try before I leave town; if it doesn't happen tomorrow, it'll just have to wait until the fall. It's not really a big deal -- I'm not expecting to drive much, if at all, over the summer, especially considering that Kevin and David and Jed all have stick shift cars (I know how to drive stick very very slowly). Mostly, I just want to get this whole process finished with and out of the way! I don't want to think about getting a driver's license ever again...

I finished a draft of my history paper last night. At twenty-four pages, it's the longest paper I've written since my bachelor's thesis. It doesn't feel nearly long enough, to be honest. I tried to talk about Sri Lankan identity formation, and there was just so much that I learned in the process of this course, plus I wanted to integrate a little bit of stuff from my post-co class last fall, and I just barely managed to put in enough detail to make it a coherent narrative; I'm not at all sure that I've really justified what I've said. But I think anyone who reads it will understand Sri Lankan history a lot better than they did before (well, anyone who doesn't already know lots about it), so that's something, anyway. David will try to look at it today, and I'll try to squeeze in a revision sometimes tonight or tomorrow -- when it's done, I may put it up here, since I imagine some people may be interested. It's long, but it's really not dense. There's maybe two pages of theory-type stuff in there, and it's theory-lite in any case. Mostly it's just story. I'm not sure how to do footnotes in HTML, though.

It'd also be better with maps. Maybe I can find some on the web.

This morning I have a passel of chores to do -- finish grading, do up this travel grant application, draft two letters, hand in final grades, deal with a leftover grade from last fall, send a BW fax, ship Barbara's collages out if I can find sufficient packing material, copy 700 SH flyers and mail them to WisCon for packet stuffing. All little bits of things. Ideally, that doesn't take me all morning, and I can spend at least an hour at the library boning up on secondary source material on Ada before I meet with Kathryn. Meetings 'til 2, then a practice drive 'til 3:30, then I come home and write like a fiend. With any luck, I can finish a draft of my Kathryn paper tonight, though that may be wildly optimistic. No Buffy for me!