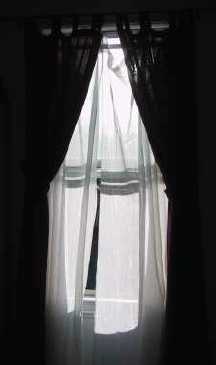 I woke up happy today. I've been waking up at 7, on the dot, as if to an alarm, for weeks now. Today I decided that I just wasn't going to do it, and I stayed in bed and dozed off and on until 7:45. By the time I woke up, the sun had made it over the mountains and was pouring into my bedroom through the sheer white drapes; the drapes themselves were billowing occasionally, letting in a crisp morning breeze. The combination of sun and fresh air just made my body feel so good (and it needed it, since it spent a lot of yesterday tromping around campus doing various stupid errands). So nice...

I haven't been so purely happy lately. I haven't been unhappy either, really. Just very busy, trying hard not to forget anything (I leave in less than a week!), getting stressed and anxious about finishing everything and finishing it well -- see, I don't really doubt that I'll write my history paper and my Kathryn paper; what I doubt is that I'll do nearly as well on them as I could. And it's funny, because I know I'll get a decent grade regardless, and this stuff isn't going to go on to be published (I might write a publishable paper at some point, but neither one of these is it), so it's really just my professors who will see it, whom it will affect. And I want them to be impressed. That's all it's about at this stage -- not the grade, not even my own satisfaction, because at this point I know damn well what kind of paper I can write if I take the time and put my mind to it. I know I can do something decent. The question is, will I manage to get something done in time that will impress them as something decent? We'll just have to wait and see.

All of this vague formless anxiety has come out in various forms. I'm either forgetting to eat or eating too much. I feel rushed, so instead of putting food onto a plate and sitting down at the table, I heat up some curry on the stove, and then stand over the pot with some bread, eating quickly with a book in my free hand. I do this a lot when I'm busy -- it's very characteristic, and somewhat odd. Someone should take a picture of me doing it sometime. Would make a goofy back cover photo for a book.

I'm also reading children's books a lot. I can finish one in about an hour, so if I'm feeling like I just can't stand working anymore, I grab one of them (I've been on a Tamora Pierce kick) and dive in. I've read six since Tuesday. If any of you ever live with me, please note that if I'm reading children's books compulsively, this is probably a sign that I'm over-stressed, and should be left alone. Unless you want to make me fabulous dinners and then watch me stand over the stove eating them. That would be okay too.

I've also been doing art. I'm so jazzed up with all these little bits and bobs floating through my head that I can't seem to just relax. I sit down in front of the tv and almost immediately pop up again unless I'm actually doing something. So I put the crocheting into my hands, and that'll keep me sitting through a sitcom, but I can't do it for a long time because it's a little tough on my right hand (which is too bad, 'cause I'm getting close to finishing this afghan finally, and I would really like to have it done before I leave. For no good reason. Just 'cause I'm finishing things up). But Zoe's stained glass has been good for distracting me; I can listen to the tv and be amused, while focusing on doing the fussy finishing work. But now I'm done! What will I do now? 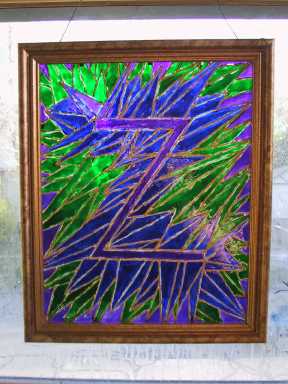 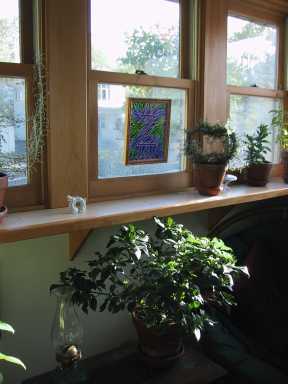 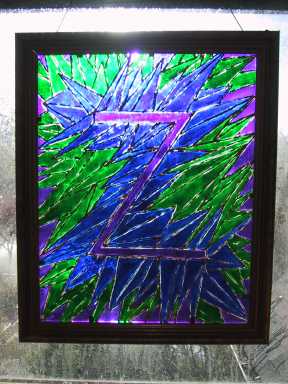 I'm pretty happy with how it came out. It's not real stained glass, y'know. I didn't stain lots of little pieces and then put them together. I think I may try that sometime soon (I have to go get a glass cutter first), because the problem with doing it this way is that it's a) really hard to get the paint to go all the way to the edge of each piece and b) the dividing lines ended up coming out a little thicker than I wanted. The way I did this was that I first did the design on a piece of paper. Then I put that sheet under a pane of glass (stolen from a picture frame) and traced it with gold outliner (which has a fairly tiny tip, but is still a little hard for my clumsy hands to use neatly). Then I filled in the various triangles with paint. Then I went over all the lines again with gold outliner (there's a lot of waiting for stuff to dry in there too) because they'd gotten covered over a lot. I like the overall result, though I though there are a few too many little crystals; I don't think I needed so many divisions, and it makes the design a little busier than I'd like. Next time, bigger pieces. The first picture is of it hanging on a window that isn't getting direct sunlight; you can see the gold edging fairly clearly. I like the second version better; that was hung in a window that was getting direct sun, and somehow the colors seem more like I imagined them, and the gold turns to black. Next time I may just use the black outliner instead.

I used to draw crystals a lot when I was a kid. Dunno why.

Today I have to do final grades for my students -- I had such a good group this semester! I've never given so many A's before -- it's a little shocking. I don't think I've been particularly easy on them; I think they've just worked hard and done good jobs. It's still a little odd realizing that there *might* be a B+ or two, and that the rest will be some form of A. After grading, a bunch of other little errands, and then I go to campus and meet with Kathryn. I don't actually have anything scheduled for this afternoon, which is good, because I have to clean and cook. I invited people over for dinner tonight for potluck Italian -- I'm making gnocchi, bruschetta, and mascarpone cheesecake with balsamic strawberries. Technically, I'm only supposed to make one dish, because it's potluck, but I won't get to cook for these people (I invited a good chunk of the department) again until August, so what the hell. If there's too much food, I can eat it from now until Thursday.