Menu
Hey, munchkins. Sorry I didn't write at all during the trip, but I had to dial-in long-distance, and they were charging me $5 for the first minute and a $1/minute thereafter; just couldn't afford to be logged in more than the bare e-mail minimum! Before I tell you about the convention, here are a few belated pictures from Nalo's trip to the Bay Area: 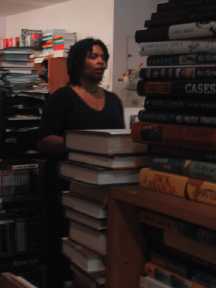 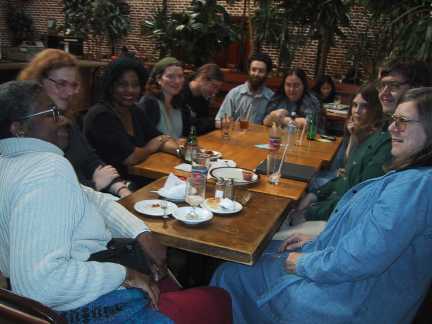 Can you name all the people in this picture?

I leave it as an exercise for the reader. :-)

The con was really nice. My paper went over well (I heard later that some of the higher-ups thought it was 'very professional' and that I 'really knew my stuff' :-), though I did run over time a bit. There was much socializing (and more drinking than I've ever done in a single week -- I think it was the pool's fault). There were good papers (though I admit that some were not delivered as well as they might have been (traditional academic drone)), and interesting panels (including one on the history of SF, and one on Carol Emshwiller, whom we'll soon be featuring at SH). There was lounging by the pool. There was a photo for the front cover of Locus, with lots of conference attendees, including yours truly in a swimsuit, eep! I think it was the pina colada that did it. I refuse to be held accountable.

There were many old friends from the author/editor world, and lots of new ones from the academic world. Particularly fun was running into Sean Stewart, last seen years ago at Monterey for World Fantasy (and he's just as sweet and charming as ever), and meeting Ted Chiang (who works as a tech writer in Seattle, and on the side, writes award-winning short stories). I was a bit intimidated by Ted, to be honest, but eventually figured out that he wasn't being aloof and snooty -- just shy. It's pretty cool how he can make shyness look like self-assurance, though. Wish I could do that. He just keeps his mouth shut and listens; when I'm feeling shy, I tend to babble like an idiot (which, of course, makes me feel even more of a fool...).

On Saturday, I took it easy -- some time by the pool, and then a trip to the beach with Nalo and Ellen Klages and Kate Elliot (who I think I had met briefly before, but got to know much better this trip; she's cool (author of the Jaran series)). It was nice to see some of downtown Ft. Lauderdale, though you'd think with such pretty land, they could build more attractive buildings. I kept stopping to take pictures, like a true tourist. The con ended Saturday, but I wasn't able to fly out 'til Monday, so Sunday I went with some people to the Everglades. It was so very beautiful.

I also fell in love with palm trees all over again. They have them in California, but somehow they don't seem to make the same sort of impression that they do in Florida. Maybe because Florida has more of them, or more flat land in between them? 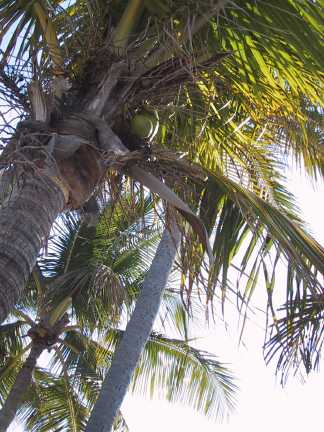 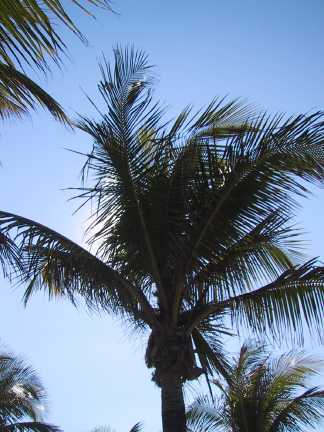 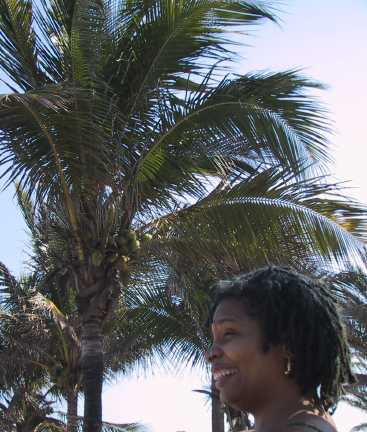 I'm especially fond of that last one, I think because I can imagine Nalo back in the Caribbean...somehow Toronto just seems wrong for her. It's so cold!

Also beautiful was Nalo sitting on a root of what sure could have been a cottonwood tree (or at least what I imagine a cottonwood tree might look like). I find that I really love taking pictures of Nalo; something about how animated her face is, I think: 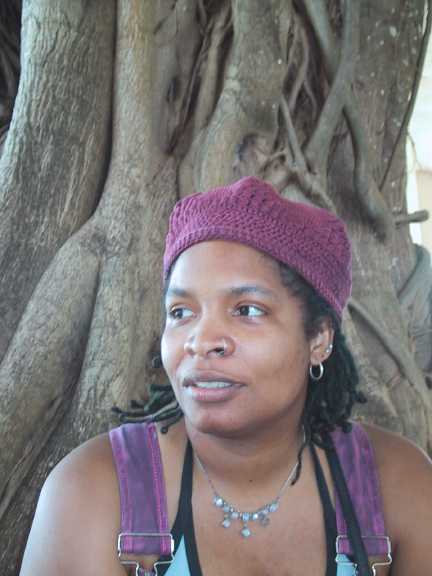 I'm on the plane now, heading home. Tired. I get back around 4:30, and I'm afraid I have to eat dinner, drink tea, and try and get the rest of my homework done. I've done the reading for Narrative Theory (Marguerite Duras's The War, which was chilling and very good), though I think I might also have a classmate's paper to read -- will have to call Paul and ask when I get back. Probably a few essays to read for Canonical Perversions. Nothing for history until Wednesday -- then I try to read two history books in one day. Hah. One story for Fiction Workshop that I have to not just read, but write a cogent analysis of to present. And, of course, my tech writing class to prep for; we're just finishing web pages, and I honestly have no idea at this point what I'm teaching next. Maybe oral presentations and visual aids? Will have to check the book.

I have some time tomorrow morning as well, of course, since I don't go in'til 10:15. But I'd like to get the academic stuff done tonight if at all possible, so I'm not feeling stressed and anxious in the morning. We'll see how well my brain is working in the morning.

I also want to carve out some time to work on a story. I need to submit something to the editors above me for BW; it'd be nice to have something of mine in there, like last time. I think I'll try to keep it short this time around, though -- the last one was 7000 words, and I think they want to actually make this edition a bit shorter than the last (or possibly include some artwork). I have the glimmerings of an idea, but I'm not sure it'll work, or that there's enough to it yet to start writing it. All I have is a single character; no real plot. Plot is still my weak point, I'm afraid. But she's cool, at any rate. We'll see what happens -- but to be honest, probably not until May. I doubt I'm going to get any new writing done before then; I really want to get all the academic stuff well done and finished by the end of April -- that's the priority.

And maybe learning how to drive. If I can squeeze that in there somewhere, that'd be good...

If I do any writing in April, it should be revising a story to send to Glimmer Train. I think it's almost there; a few hours concentrated work and I think it'll be ready to send off (once I sweet-talk Jed into giving me a line edit, that is). I sort of want to start on it now, but my back hurts, my computer batteries are running low, and I don't actually have my notes with me. So best not, I'm afraid. I guess I'll think about the BW story instead, and see if I can come up with some sort of plot.

I'm looking forward to sleeping in my own bed, and cooking a nice curry for myself. It'll be good to see Paul and Jenn et. al. I may try to do a couple more collages and take them to WisCon for the art show. Aside from that, though...I'm still not so thrilled about going back to Salt Lake. Ah well...I'll survive.