Facebook Instagram Youtube Twitter Patreon Shopping-bag
Menu
Well, it looks like the Ellison thing is sorting itself out. My best summary of my current understanding of it all is that Ellison does in fact have a reasonable case, that he expressed himself so incoherently that some people misunderstood him, that I muddled myself by trying to listen to everyone, and that Jed explains it all very nicely and clearly in the Internet Piracy topic over at the Rumor Mill. I do think a couple of people who posted there were unnecessarily insulting, but I've told them I think so, and hopefully they're still speaking to me. And if not, so be it.

My list for today is exceedingly short. I managed to send out this month's batch of SH checks and contracts last night, which was one of the big items on the list. Some random this and that, rereading the Busmiller book on Indian women (fairly light reading), and...um...that's it? I may actually get to work ahead a little, on one of things I have slated for Spring Break. Or maybe I'll just take the afternoon off. Umm...I'm not sure I still know what to do with an afternoon off. Though the weather's gorgeous out (it was light sweater weather yesterday), so just going for a long walk might be an idea.

Or, of course, I could try writing a novel. That appears to be Tim Pratt's response to having too much time on his hands. I find the man a bit bewildering, to be honest. He recently figured out that one of his stories would be happier as a novel, and he's delighted. Practically bouncing up and down with glee. Whereas I just realized that "Challah" probably needs to be a novel, and I'm terrified, which I assure you is the correct and rational response. Some people are just weird. 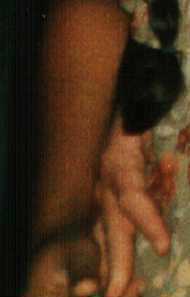 I have one formal photo of the two of us,
you, in a rare suit, stiff but (barely) smiling;
I, in an olive dress, autumn-patterned.
We were going to a wedding, our only, I think.
Your mother was so pleased to see her son,
handsome in a suit, rather than t-shirt, jeans;
she took a picture. You could not resist her,
your mother, the way you can resist me.

I spent that Christmas with your family,
estranged from mine; she gave me a copy kindly,
framed in black, formal. I kept it in my desk,
not sure if you would want it out where anyone
might see it. I forgot it for a while. I moved
away, then moved again to join you, years later.
The photo moved with me, from desk to closet.

And then you went away, to work, and I stayed,
for school. I took the photo out of the closet,
dusted it, placed it on a table. It has sat there
since last September, full of stiff formality,
your almost-smile, our bodies facing forward,
clearly posed. Only yesterday I noticed, down
in the left-hand corner, almost lost against
the frame, your hand on my hip, pale against
the autumn dress. My arm stretches down,
and one finger curves up to embrace one of yours.

I had not noticed this before.