I’m a little groggy today because Kavi woke me up in the middle of the night, crying because she couldn’t sleep and she was so worried about school. Poor munchkin. She’s been coping pretty well with remote so far, but Kavi lost track of time yesterday, when she was supposed to be catching up on missed assignments, and she wasn’t completely finished when it was time to go to bed — I’m afraid her perfectionist streak came out as buried anxiety.

*We* aren’t worried about her missing a few assignments, but she frets nonetheless. It seems like helping to keep her on track is probably the best approach — I’m thinking a big wall clock might help? Kevin points out that she carries her phone everyone, which has a clock on it, but that doesn’t mean she actually looks at it…

I put her to bed with me and she’s doing fine today, but it was a bit disruptive. And then I had my alarm set for 6:30 (I’ve been getting up closer to 9 lately) because I had a U+ board meeting at 7 a.m. I’m really in favor of these international projects generally — I think it’s so important that we take global approaches to futurism. But time zones can be brutal. Today’s meeting had people from France (where U+ is based), the Netherlands, China, India, Africa, and the U.S. — 7 a.m. turns out to be one of the few feasible times for hosting that kind of meeting.

So, thinking slowly. It was a good meeting — U+ is starting to do more, and I may have just signed up to be on the committee reading submissions for the next zine, which is on the future of food. These are unpaid, but we select some to be published by us, so if you’re interested in the future of food and want to submit a poem, essay, fiction piece, artwork, design concept, etc., please do. (Short is better for prose — I’d aim for under 1000 words.) I’ll put out a proper call soon.

Also having a bit of a tough time today because my wrist is much worse. I have a lot of mid-term grading right now, so I ended up spending a fair bit of time typing yesterday (responses to student stories, etc.). I also dug out a big bunch of yellow irises to divide, when I needed a break from the computer. I thought I was being careful; I’d gotten a brace, and was wearing it all day and everything, trying not to use my left hand much.

But I woke up with my wrist really hurting any time it was moved, basically. It’s fine if I don’t move it, doesn’t hurt at all, but y’know, that’s rather limiting. I cut up some chicken, and y’know, cutting up chicken with one hand? HARD. I had six pieces, and gave up after two. (Kevin took care of the rest.)

There’s lots of household stuff I can’t do right now (even just carrying my laptop around with a mug of coffee is a little tricky to manage, as my left wrist can’t bear that much weight), and I just have to accept that limitation.

Accepting limitations is not my strong suit, folks.

At least it’s my left hand. I think my plan for the rest of the day is to do the computer work I need to do, record some teaching videos for my students (no hands!), maybe start a new sketch (right hand!) for another Spoonflower challenge, and read (one hand!) I think I have to be pretty strict about resting the left hand for a few days, because it WAS getting better, and then I clearly overexerted it yesterday.

If you’re local and want some irises, come help yourself (up to 3, as I’ve also posted in the garden club group, and would love to spread them around). They’re pale yellow bearded irises — sorry I don’t have a photo. I’ll try to remember to post a comment here when they’re gone. 332 Wisconsin, the blue and purple house. 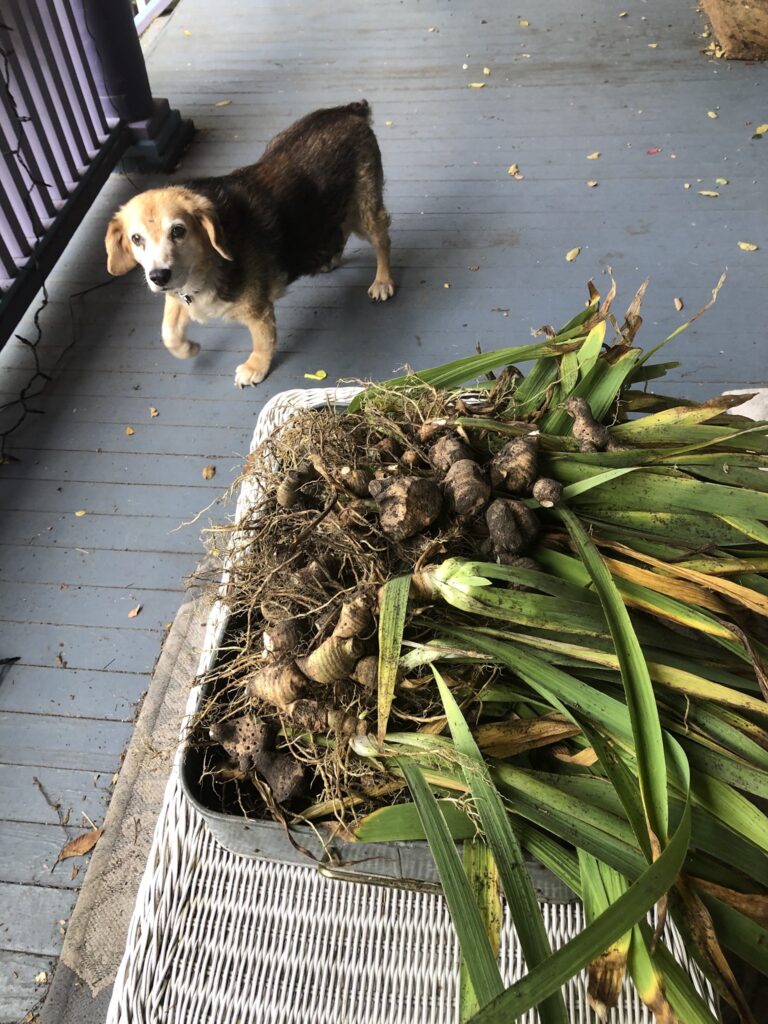