Swung by the kids’ schools for conferences on Thursday (yes, it’s been a very busy week). Isn’t that a lovely sign on the wall? Anand’s teacher says that every day, she asks what greeting Anand wants, and he picks something, and she goes for it, and then he does something else (like meeting her high-five with a fist-bump), and then Anand bursts out laughing and walks into the class laughing and he starts EVERY DAY that way because apparently it never gets old, and she’s just glad he’s happy in school and so are we. (Ms. Fourman is very chill and very sweet. She was Kavi’s favorite teacher in elementary school.) 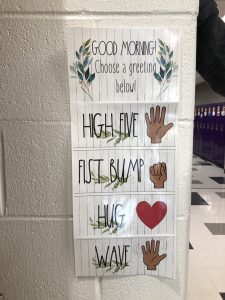 VERY RELIEVED that Anand is having a school year that is so much better than any others he’s had so far. No disciplinary problems (!) — remember when he got called into the principal’s office 17 times in kindergarten? Remember when he got into a shouting match with the assistant principal in the cafeteria? The assistant principal, who is now one of his teachers, was shouting right back, and we were quite concerned about this classroom assignment, but no issues so far, thankfully! And now, both of his teachers are saying everything’s just fine. WHEW.

I’m not sure whether to attribute the change to simple maturity as Anand gets older, or the fact that we started him in weekly therapy sessions in June ($25 co-pay at SmartLove with our HMO insurance), or something else entirely — we’ve been able to parent a bit more consciously around these issues this year too, which may have helped.

I was in the middle of chemo / surgery / radiation the fall that he started kindergarten, after all, so that year and the following year, we were mostly just trying to keep from drowning. Whatever’s made school so much better for him, we’ll take it. We’ve been SO anxious about him and school the last few years! Feels like a huge weight’s been lifted.

Kavi’s conferences also went well — her only issue is that she’s not proactive about making up missed assignments, and in 7th grade, they expect the students to come to the teachers and take care of that. Good training for college students — many of mine still don’t know to do that, and at this point, I mostly don’t have time to chase them down for anything other than a major paper or exam.

So she’s spending much of this weekend on assignment catch-up; it’s a lot, and she also has at least one soccer game (semi-final today, possible final tomorrow), the kids’ laundry to do (standard weekend task we’re trying to instill), and helping me grind and pack curry powder bags. Busy busy for the big girl. But soccer is ending, and Kavi’s excited to try some clubs starting this coming week — Spoken Word on Mondays and Art on Thursdays. I like Kaviopolis and her Sri Lanka-style treehouse! 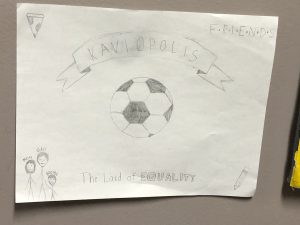 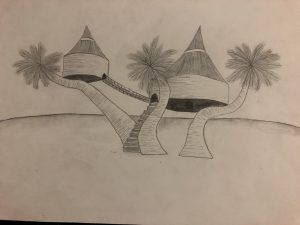 I made Kev take a photo with me as we walked out of Anand’s conference, and he said, “Why?” and I said “Because we both are dressed nicely today and the leaves are beautiful and I’m happy.” So there. 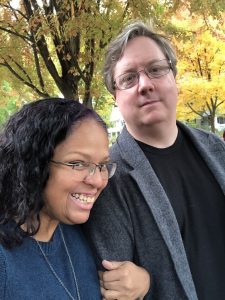