Skip to content
Last fall, we re-poured the floor of our garage, which was a disaster -- really badly cracked, with ankle-threatening holes in it. We'd thought about rebuilding the whole garage -- maybe even extending it, or adding on a second story. But budget didn't allow, and we didn't really need to do it; unless our in-laws decide to come live with us, we have plenty of space in the house as it is. We'll give the garage a new coat of paint soon, hopefully, to match the house. When we were redoing the floor, I asked the concrete guys if they could leave some holes in front of the garage. They were kind of bewildered, but after some consultation, agreed that it wouldn't hurt the foundation any (I wasn't sure if the holes would direct excessive rainwater towards the foundation), and that it would be easy enough to frame out some holes.

So they did, and this morning, I planted two Blaze climbing rosebushes, one on either side. Blaze is an old rose, developed in the 1930s; not quite as old as my 1885 house, but it still pleases me to think that this is the kind of rose that the owners might have planted long ago.

When we were considering the rebuild of the garage, I had asked the architect about building out a trellis on that side. He was surprised, given that our garage faces onto an alley and a vast parking lot and a host of apartment buildings. Most people, he said, didn't spend money decorating the back of their house. I told him I had a lot of neighbors who walked through that alley and parking lot, and I'd like them to have something pretty to look at as they went past, which he agreed, made sense. Even without the fancy trellis, I'm hoping Blaze will be happy there, baking in the sun, growing up and over the garage, blazing red for months on end. And I hope the neighbors enjoy it! 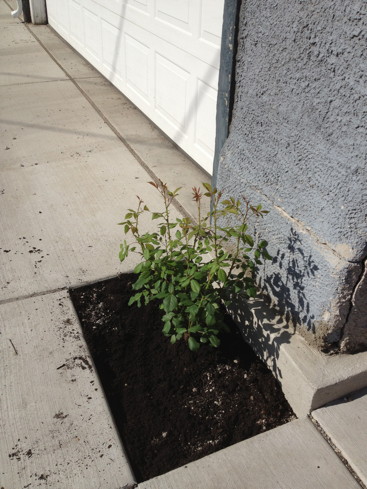 2 thoughts on “Last fall, we re-poured…”