Skip to content
We're trying to figure out what to do with our kitchen window, which looks out right onto an ugly brick wall. The plan is to do a pretty simple stained glass -- or rather, obscured glass. Not color, I think -- we're trying to maintain a clean, simple feel in the kitchen, balanced against the grey walls and blue cabinets. And definitely not in the typical swoopy Victorian stained glass style -- neither of us like that. To remind you, here's the kitchen with its window (partly obscured by a kitchen plan): 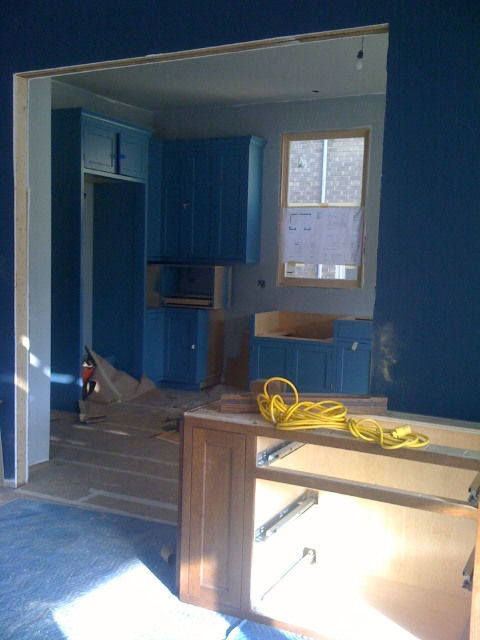 We'd originally thought a simple diamond-pane idea would work, with a mix of different types of obscured glass, so it'd still let in light. (Kev thought maybe some clear panels too, to let in more light, but I think that would just bug me, to stare directly at the yellow brick). I was a little worried that it would feel too Tudor / medieval (that's a very old style, the diamond pane), but Pam thinks it looks modern, interestingly. And Gothic Revival was certainly a Victorian era, although I think not quite the same era as my house. Still, there will likely be some medieval-style pieces scattered around the house regardless, especially given my obsession with King Arthur (and kingliness in general). Thankfully, Victorians are very forgiving of eclecticism -- more so than either Prairie or modern styles, I think.

So then a simple diamond-pane, or something a little more complex? I thought possibly it would be nice to have some gothic arches at the top, to echo the idea for the butler's pantry and the piece I built for the dining room, but I'm having a hard time finding a photo that looks like that. Or if they do, the arches are made out of stone, on an old Gothic cathedral. :-) Maybe we should just stick to diamonds, with a simple rectangle border? I'm just not sure. Here are some pics that appealed to me -- what do you think?

5 thoughts on “We’re trying to figure…”