We've settled in pretty well to the little rental house, and while it's definitely frustrating in some regards (almost no overhead lights, no bathroom on the first floor, various appliances that need repair, like garage door and washer), it's also very cute and in a great location -- two blocks from the Austin Blue line subway stop, and two blocks from Buzz Cafe. It's got a ton of windows and gets flooded with light, and Ellie and Kavi are already utterly thrilled with having a backyard of their very own. If we were looking for a starter home, or even if we just didn't have two kids or didn't want an office or two in the house, this house would actually be a great deal for us. When we're done renting it, they'll be trying to sell it, and I hope they find a good buyer, as I think it's a very nice little house.

I'm still in enough pain that Jarmila and Kevin have been doing most of the unpacking; I do okay at just walking around, but bending over is awful. I think the incision is healing well, as such things go, but they did slice me open. Again. So I direct a lot. We're mostly unpacked on the first floor; still a fair bit of clothing and bathroom stuff to do on the second floor. It's rather lovely having a basement, though -- it's not very finished, so we're not planning on doing any real living down there, but it excels as a place to put all the stuff that doesn't actually fit into this little house. We've finally managed to get our big sectional couch to a friend, since it fits neither here nor in the Victorian, and now are trying to figure out whether we want to buy a nice loveseat to use here in the tiny living room, but also as a long-term purchase for the Victorian (that will take two months to have delivered), or just pick up something very cheap on Craigslist for now, so we actually have a couch right away. We'll see.

We've even managed to cook once since moving in on Tuesday -- I was craving Sri Lankan curry, and finally made one. But mostly, we've had takeout -- mediocre pizza, bad Thai (The King and I, which was terrible; the curry fried rice was actually inedible and had to be thrown out after the first bite), acceptable Indian (Khyber Pass, actually made lamb vindaloo and Goan fish curry quite spicy when asked and tasty, although their tikka masala was a bit underseasoned), and more mediocre pizza. Venu and Sendhil stopped by the other night with big tupperwares full of homemade chili, which I'm really looking forward to eating.

It's too bad that so few people I know are of the 'someone-had-a-baby-bring-them-a-casserole' mindset, because it's tremendously helpful. I include myself in that too -- somehow, even though I love cooking for people, I've only once (Dan and Nadya) managed to bring someone food when they had a new baby. And it's so very very nice. Venu and Sendhil brought us something spicy, which is great, but honestly, even a big pot of mac and cheese would be welcome right now. Even the simplest cooking is just a little more effort than we have energy for at the moment. Kavi's been eating a lot of peanut butter on toast, and I think she's getting kind of sick of it; she finally refused it today. 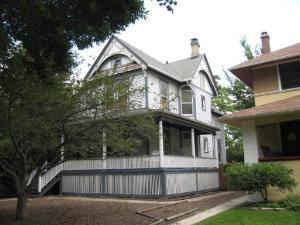 The closing on the Victorian was supposed to be Fri 10/2, but the bank requested an extension to Friday 10/9, and we said okay. Not much else we could say, but I think it really is okay; we needed this week to get settled into the rental anyway. Once we close, we'll have a lot of meetings with contractors, designers, architects, etc., plus, I want to do at least a little gardening this fall -- put in some shrubs and bulbs for the spring, so that if we do manage to get the renovations done in six months (the most optimistic estimate), there's some pretty to greet us when we arrive. The yard is quite barren as it is. It's mostly shade, so I'm reading books on shade gardening and trying to figure out just how many flowers I can squeeze into there. I'll be adding some rhododendrons and azaleas to start, I think, in that corner next to the stairs, and then some early spring flowering bulbs (crocuses and daffodils and grape hyacinths I know about -- any other suggestions?), since they should get enough early spring sunlight before the trees leaf out. The trees in question are tall trees on the sidewalk, owned by the city, so I have no control over how much shade they cast in my yard. (My yard. Still doesn't seem real that we're finally buying a house. Maybe after closing, I'll start believing that this time, it's really happening.)

Expect a lot of renovation blogging in the months to come. Once we close, I'll post a lot of 'before' photos, so you can see what we're starting with. And then I'd definitely love opinions on proposed changes, to the extent that you can have them, based on photos and my probably inadequate attempts at making floor plans. We definitely need to talk to some architects soon, to find out what's possible -- plus there's the question of city permits for a historic district house. Do you think they'd let us add a turret between those two attic peaks? I've always wanted a turret...