Skip to content
I'm not even sure I know how to explain my problem. Deep breath. Okie.

So, I set out to teach myself knitting today. Tried to learn the long tail cast-on through video tutorial. After forty-five minutes, gave up in frustration and disgust. Learned crochet cast-on instead in about two minutes, so much better (for me, crocheter). Then learned knit stitch (I think I'm doing it right). Not sure what the point is of purl stitch, but was feeling overwhelmed, so didn't even attempt to learn it. Instead, started knitting rows. This is what I have so far -- it looks vaguely okay, right? I mean, there's an error in practically every row, but aside from that, it looks like a knit piece, right? 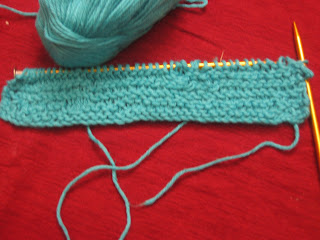 But here's the thing. My plan was to use this to make a doll dress for my daughter's favorite doll, a 15-inch HABA doll named Lotta. Kavi loves that thing, and lugs it everywhere with her, and likes changing Lotta's outfits. I was going to knit the whole dress, but an hour of knitting convinced me that I didn't have the patience for that yet, not when crochet is SO MUCH FASTER. So I figured I'd knit the bodice and crochet a skirt and figure out how to attach them together. For the bodice, I'd make a long rectangle, fold it over and sew it into a tube. Good so far, right?

But then there's the question of sleeves. Sleeves scary. No sleeves. Sleeveless! Solved that problem, right? And I figured I'd just crochet little straps for the bodice to hang on, and attach those too. I have a blouse like that, very cute.

So I knit my merry way along, until I was showing it proudly to Kevin and he said, "But what about armholes?" And I panicked. Because I am right at the base of the dolly's arms now, and I have no idea how to do armholes! I was somehow not allowing for that in my grand plan. The end that's being sewn together, fine, I can leave space for an armhole. But I can't do that with the bit that's just in the middle of my big piece. Am I even explaining this coherently?

If I were crocheting, no problem. To make a hole, skip a few stiches, chain a few stitches above it. (Umm...not sure I know how to make a bigger hole that a triple crochet layer, now that I think about it. Maybe. Too tired to figure it out right now.) But the point being, all I know how to do right now in knitting is crochet cast-on and knit stitch, and I have no idea how to make a space for a dolly's arm to go through.

I suppose I could undo the whole thing, do it as two separate pieces, and sew them together, leaving space for the arms. That would probably be the neatest solution. But is it necessary? I just don't know!