I was craving flowers last week, after too many January days without sun, but we’re at the point where the flowers will be showing up outside soon. So I don’t really want to buy fresh flowers anymore, so while I was at Target, I picked up some silk / dried flowers and a vase — Target has really upped their game in this area. Their faux flowers are lovely. 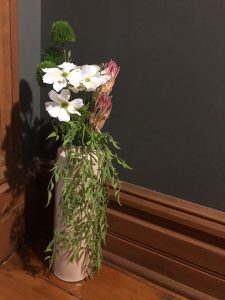 🙂 Must remember to plant sweetpea this year… 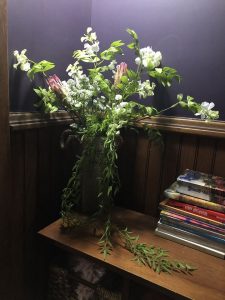 Look! I feel like the daffodils are coming up a little early this year, but y’know, I’m not complaining. 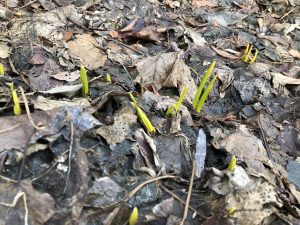 The sunshine really helps, doesn’t it? In January, I tend to focus on greens and whites in the house, pulling back from all the holiday decor, starting the year with a clean simplicity to refresh the soul.

I trim away dead stems, finish repotting things I hadn’t gotten around to in the holiday rush, add decorative stones and moss to help retain moisture, see if any growing plants needs staking so they can grow up straight and tall, and try to be a little more regular with my watering. I even remembered to fertilize this January (in theory, I do every other month in winter). 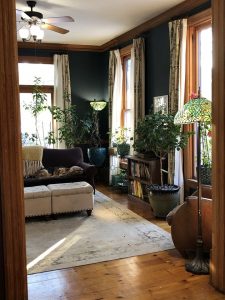 Hellebore from Trader Joe’s. I didn’t do a good job watering it last week, and the leaves got a little battered as a result, so I’ve just trimmed most of them off. Hopefully there’s enough healthy leaves left to sustain the plant! When spring comes, I’ll plant it in the garden, and with luck, it may come back next year. 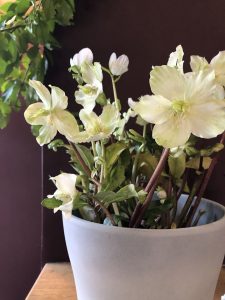 Orchid, also from Trader Joe’s. (That’s a theme around here in winter — their prices really are pretty excellent for plants.)

I bought it when it just had a few blooms but lots of buds, so it’ll be slowly opening for a month or two, needing almost no care — a little water every few days. I’m hoping to try to keep my orchids going this year, so they can come back; fingers crossed. 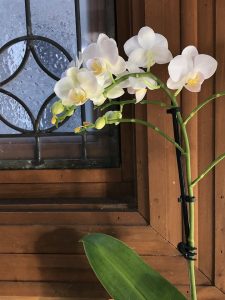 Second round of paperwhites for the season — I tried some with pebbles in the bottom of the vase, and some without — pebbles are definitely better for making them less prone to tipping as they get tall, since the roots entwine and hold on; I’ve got enough paperwhite bulbs to do one more round, and I’m going to put even more pebbles in next time!

The pebbles also give the vases a more solid base; between the pebbles and the museum wax, they’re not going anywhere, despite wandering curious cats who love to perch up here and survey their domain. 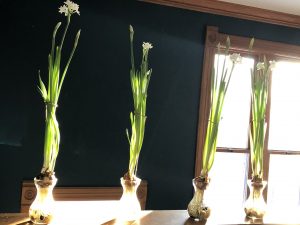 Ivy. 🙂 There’s something I find so pleasing about its enthusiastic growth. It makes me think of Sleeping Beauty, of disappearing into a fairy tale, like one of Patricia McKillip’s gorgeous novels. Oh, now I want to abandon my work for the day and go re-read a Patricia McKillip book. _Winter Rose_ would be a good starting point if you’re wanting to disappear into the wild right now… 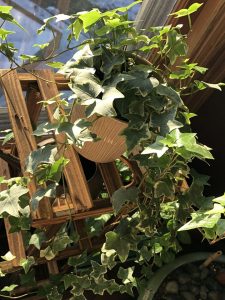 Jasmine vine climbing vigorously; my other jasmine is blooming, but not this one. Still, I hold out hope! Come back and bloom for me, little jasmine. And in the meaning, I like the geometry of this green jasmine, and the contrast with the white egg chair on chilly porch outside, and the bird feeders hanging — which oops, clearly need more bird seed. On it. 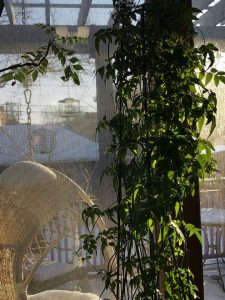 A lot of gardening well is slowing down long enough to look, enjoy, and notice where a small improvement could be made, or where a task has been neglected…

Branch of curry leaf tree peeking over the top on the left, coming back nicely after having almost died due to neglect after coming inside this fall. Sorry, curry leaf plant! I do love you so, and you contributed beautifully to the seeni sambol I made this weekend…

Okay, so I’m not quite sure I remember what this one is — a hibiscus, I think? It also had a hard time — lost most of its leaves when a child knocked it over. But lots of quiet winter rest, a sunny window, regular watering, and it’s coming back nicely. Hang in there, little guy! 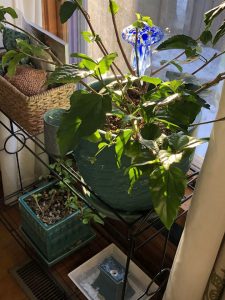 (With lantana below, also coming back from indoor winter transition, and cat water fountain.

Roshani laughed when she saw I’d gotten this stand, because it was rather 70s. Well, the 70s are back, baby. Macramé and plant stands for the win. Lots of little cuties here, along with a big tropical duranta, which will get lots of tiny purple flowers and orange berries, about twice a year. I’m trying to train it into an arching small tree form, which means it needs a little more pruning on top right now. It’s about 5 years old, I think? Coming along nicely. 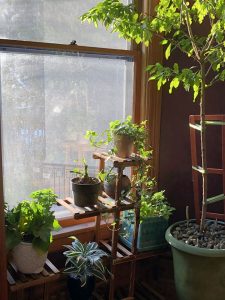 One colorful cheat. This bougainvillea is live leaves on the bottom two-thirds, but silk flowers on top right now. It’s another one that had a tough time with my intense schedule last fall, and really struggled, but winter is calmer and I’m taking better care of the plants; it’s coming back strong. Eventually it’ll grow enough that I can tie it up to the trellis, and with luck, it’ll start putting out real blooms (or rather, colorful bracts) of its own, and I’ll put the silk flowers away. 🙂 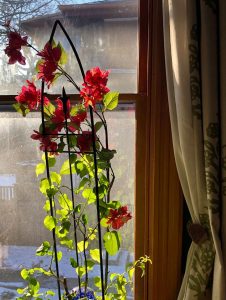 Recently someone in our garden club asked about how you put together a terrarium. Since our house cleaner also recently knocked over and broke the small terrarium we had (sitting on an overly-tippy end table), I took that opportunity to pick up what I’d really wanted all along — a taller, free-standing terrarium, big enough to house full-size orchids (24″ high interior).

A trip to Trader Joe’s for cheap orchids, and some potting soil, little plants, pebbles, and moss from the garden store, and I was ready to go. There’s very little to instruct, really, but here goes, in case it’s helpful:

a) I started with a layer of pebbles in the bottom for drainage, followed by a layer of soil.

b) I added the orchids next, and this bit, I’m not sure I did right, but since I know orchids prefer their roots to stay mostly dry, I left them potted in their little plastic pots filled with orchid bark, and just nestled those in the soil.

c) Then I tucked in some little terrarium-type plants around them. Your nursery can advise you on what’s well suited to this, but just keep in mind that what you’re recreating is essentially a moist, jungly environment. Terrariums are related to Wardian cases, which were used to bring tropical plants back from the tropics to England, keeping them alive on the long voyage. So I wouldn’t use a terrarium for succulents!

d) I added a layer of moss, which serves the dual function of looking nice and also retaining moisture in the soil.

e) That’s it! Put the lid on, and you have a moist, mostly self-contained environment. It should need water rarely. My understanding is that usually terrarium plants want plenty of indirect light (not blasted with sun) — imagine that you’re under the tree cover of a tropical jungle. So I put mine by a window that’s near an overhanging porch roof.

Now, the next step is that eventually, these orchids will lose all their flowers (though it’ll take a few months; I try to pick orchids that are mostly buds, with just a few blooms, so the show is sure to last a long time). In theory, one can then take care of them appropriately so that they’ll come back, year after year. I haven’t actually done that yet, but I have friends that do it regularly, and swear it isn’t hard.

When these are done, I’m hoping to try that, and I’m also hoping to replace one of them with a more interesting variety, since they’re all, I think, pretty standard phalaeonopsis (or moth) orchids, and there are so many more cool varieties out there. I’m looking forward to eventually experimenting with other types.

A few people have asked about the earlier photo of the paperwhites, whether they continued to work in those individual vases (hyacinth glasses, picked up over the years from Trader Joe’s in the spring). Mostly yes, with a little help.

As you can see, I couldn’t find one of my copper stakes (I think it’s buried in the basement), so that second one is leaning perilously. They’re all leaning a bit, but that’s mostly because I was a little slow in staking them, and they’d starting to curve — if I’d gotten them early, I think they’d have stayed very straight. They definitely need staking as they get taller.

The others have been staked (pushing through the bulb, but not all the way, so as not to pierce the bottom and encourage rot). Once staked, they do fine, though they’re a bit top-heavy when they get really tall, so I also added a little bit of museum wax to the bulb / glass around the rim, to help hold them steady.

I get the copper stakes online, and they’ve held up very well for many years now. I use them for amaryllis too: https://smile.amazon.com/BRECKS-Deluxe-Amaryl…/…/ref=sr_1_5… 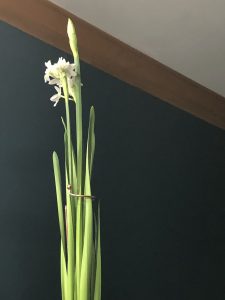 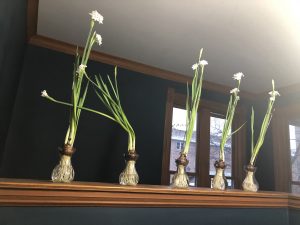