So, here’s the thing with planters. When I first started gardening, I was in Oakland, where it’s 70F most of the year, 50F in winter, you can plant annuals in spring and the plants will basically stay good for most of the year. This is not the case in the Midwest.

I spent my first few years here super-frustrated with my planters. We were in a condo in the city, were lucky enough to have balconies, and I’d fill them up in the spring with lovely flowers that would all die two months later. GAH. I was angry and miserable and sure I was doing something terribly wrong.

Eventually, I went to a free planter class at Gethsemane, and I learned some things:

a) Our spring planter annuals generally can’t take the heat of Chicago summer. So if you go to garden stores right now, and buy what’s on offer, you’re going to get plants that will die in the heat in two months. These include such lovelies as: ranunculus, diaschia, nemesia, stock, pansies and violas (those last may go dormant and come back in fall).

b) That is okay, I think, as long as you know what you’re getting and can budget appropriately. If you can afford to do a spring planter, summer planter, and fall planter, pulling out at the end of each season and replanting, that’s going to give you the best display of blooms. Alternately, you can skip spring and start in May/June with heat-tolerant flowers (like petunias); some of those may stretch through autumn.

c) You can stretch the seasonal thing in various ways. For one, there are silvery-grey artemisia, green or variegated vinca or ivy, and other similar plants that you can plant now and they’ll happily grow through the summer and fall. So if they take up 1/3 – 1/2 of your planter, that”ll save you some money, and also, they’re generally a terrific foil for the brighter flowers. You can also use them to tie together multiple different planters — you might have a ranunculus focus on one, and stock in another, but with artemisia in all of them, for some garden coherence.

d) You can also use bulbs — I had mini daffodils (Tete-a-tete), early species crocus, hyacinths, and muscari in mine. The crocuses are done, the daffodils are finishing, the hyacinths are coming into full bloom, and the muscari are getting ready to bloom. When each one finishes, I’ll pull them and plant them in the garden beds, and most of them will come back next year (remember to sprinkle cayenne when planting bulbs to deter critters). This is a good way to stretch your garden budget — don’t toss those spent bulbs! When you replant, be sure to leave the leaves on there to soak up sun and wither; that’s what’s going to replenish the bulb for next year’s blooms.

e) Another possibility for stretching funds is to divide. This is for the more adventurous, because I don’t know off the top of my head which planter plants divide well, but I think most will? They demonstrated at Gethsemane how you could buy, say, a big hanging basket chock full of pansies, and then simply pull (or cut) the roots apart, so you had 6 chunks of root+soil+flower. That then lets you do something like spacing them along a railing planter, and is often going to be cheaper than buying 6 separate small pansy pots.

f) If you look at professional planters, you’ll see that they’re jammed really full. No bare dirt, plants everywhere. That’s a little expensive, but it’s how they get that really dramatic full glory of flowers. If you want that look, you’ll either need to similarly pack the flowers in there, tightly together, or plant more sparsely and wait for them to fill in. Your choice!

g) Last tip, and this one I did know already, and you see it everywhere, but just for the newbies — remember the phrase, ‘thrillers, fillers, spillers’. When you’re composing a planter, the standard thing to do is put something tall in the center (the thriller), surround it with bushier plants (fillers), and tuck in some trailers on the edge (spillers). That’ll give you a nice, balanced composition with flowers and pretty greens at various levels. Now, you don’t have to be wedded to that — when the Garden Club was meeting in person, we’d often have a speaker come who did planters, and I remember one of them did incredibly striking asymmetric compositions. But in general, thriller/filler/spiller will give you reliably attractive compositions. Filling a planter entirely with a single flower can also look great!

I’ll do some notes below on four of my spring planters for this year, in case it’s helpful:

1) Dark pink ranunculus (it comes in shades of white, pink, peach, coral, yellow, red, purple), with silver artemisia and purple diascia (or maybe nemesia, I get those confused). In this one, three ranunculus plants function as the thriller — they’re not tall, but they’re such a bright pop of color, they draw focus, and this parkway planter is low enough, that passersby can easily see the whole planter from the top.

2) Blueberry, snapdragons, silver artemisia, variegated vinca. Again, this one doesn’t really have a thriller, because I have a blueberry planted in the center, which seems to have survived the winter, hooray. I expect it to grow and set fruit (the soil in planter is amended to be more acidic, which blueberries need). The snapdragons are really more fillers normally, but four of them together makes a nice, reasonably central mass.

3) Blueberry, white stock, pansies and dianthus/pinks, diascia (or maybe nemesia). Same idea as previous, with the stock taking the place of the snapdragons. I have a Victorian, and stock is a sweet-smelling old-fashioned sort of flower. It’s fun planting flowers that would have been around in some form when my house was built in 1885. The pansies were the first things I planted in here, in very early spring, and they’re a little buried now; I could pull them out for more visibility, but probably won’t bother. They should survive through ’til fall, but won’t bloom in summer. The dianthus isn’t blooming yet, but it actually survived the winter from last year, and the green is looking very healthy; I’m looking forward to blooms soon.

4) The railing planters have pansies, tall pink stock, trailing variegated vinca, blue muscari bulbs, purple nemesia, pink hyacinths, and silver artemisia. The muscari and hyacinths will be pulled when they’re finished and planted in the garden — there were early crocuses there for the last month, which I’ve already pulled, and are waiting to be replanted. Note that stock comes in both single and double-flowered forms.

Annual planters can be a noticeable amount of work if you do it this way, but also a lot of fun. If the rest of your garden is mostly set, with trees and shrubs and perennials, then playing with annual planters gives you an opportunity to have some fun garden experimenting time, at relatively low cost (annuals are generally cheaper than perennials (and much cheaper if you start them from seed)). And just remember to keep them watered! 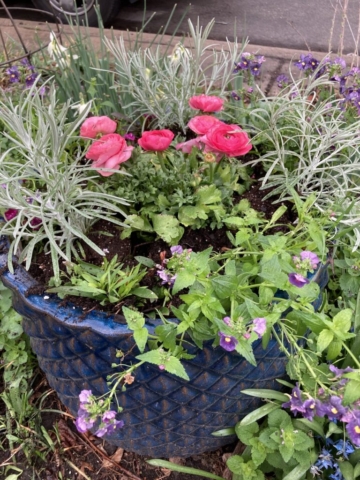 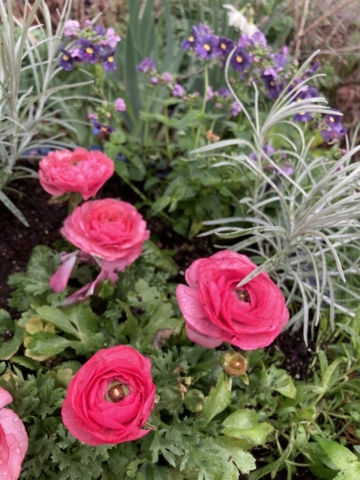 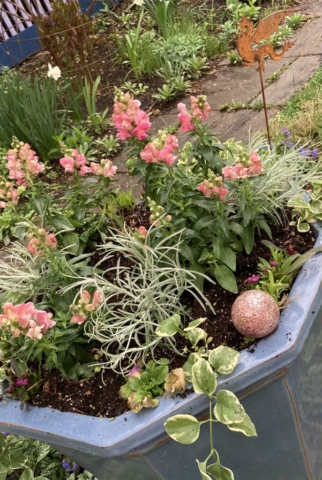 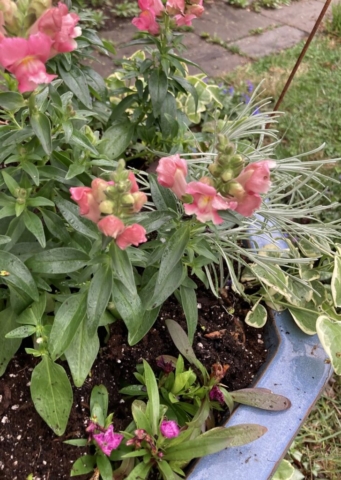 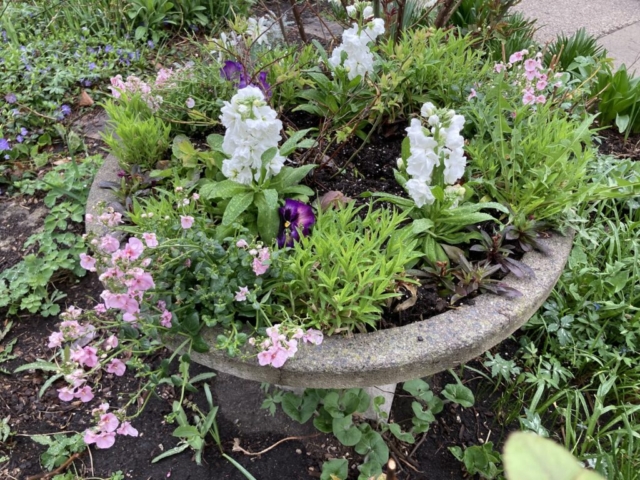 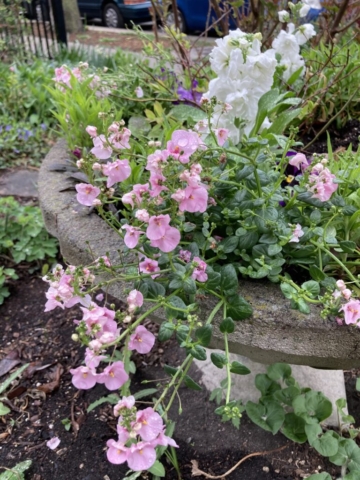 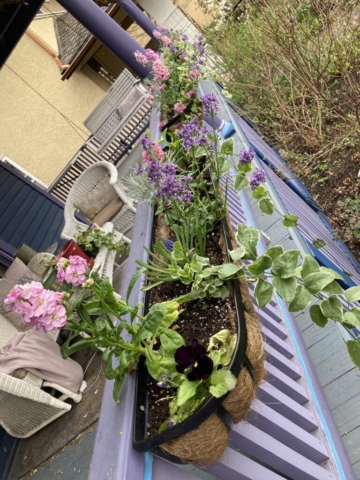 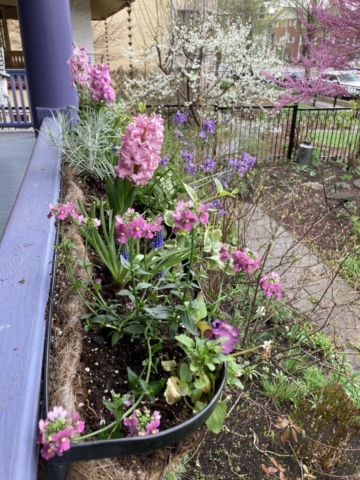 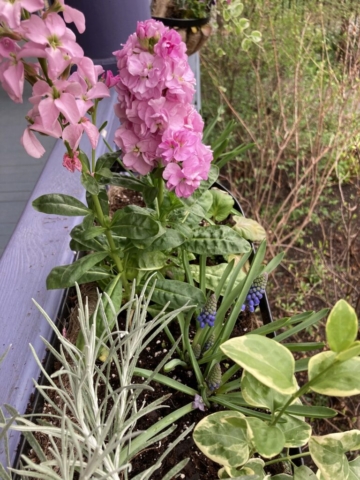