Anand got an Easter card from the grandparents, and asked Kevin when Easter was. Kevin said he thought we might’ve missed it. (Because time has no meaning in pandemic-land and we’re losing track of everything.) Anand said that was sad. But they checked, and learned that Easter is tomorrow, and so Kevin asked if I had anything planned for Easter.

(I’m generally the holiday-making person in our household, and I’m fine with that division of labor, esp. since Kevin will do any tasks he’s directed to. In normal times, I enjoy it, and Kevin enjoys not having to go to all the parties I throw, so it works well for us.)

We’re not religious, so usually Easter is just egg hunt with the kids’ friends + decorating the house with a rather frenzied assortment of bunnies + making a family Easter dinner of roast lamb with mint sauce and asparagus, with some kind of sunny lemon cake for dessert. To be honest, folks, as much as I normally enjoy elaborate holiday preparations, I had been sort of tempted to give the whole thing a pass this year. Anand is 11 and Kavi is almost 14, so I thought maybe they were getting too old to be excited about egg hunt?

But Anand thought it would be sad to miss it.

So at 9:45 p.m., I ran over to the Target to get some Easter candy that would fit inside eggs. Came home, got Kavi off to bed, then it took me a while to find the bin in the basement with the plastic eggs, because I’d cleverly put it away neatly on a shelf tucked behind a whole bunch of other stuff, so it was probably midnight before I found it and started actually stuffing eggs. I didn’t really mind, though — it was sort of peaceful, and I was watching a murder mystery while I did it.

I did 20 eggs with chocolate for our kids to hunt for in the backyard in the morning. And then I did a hundred or so eggs with little toys in (they were leftover from last year, so I was just checking those eggs rattled when I shook them), and in the morning (probably around 10 a.m.) I’ll go out and put them in obvious places around my front yard, and put a note on the Little Free Library encouraging neighbors to bring their little ones to hunt some eggs in our front yard. I’ll probably put a bowl of candy in the LFL too, because I have a fair bit left.

And that’s why it was 1 a.m. before I started wandering around in our backyard cleverly hiding eggs with chocolate in difficult spots. I’m betting my kids will miss at least two of the hiding spots — we’ll see.

It’s a good thing I had no plans to do any work this weekend — I’m taking the weekend off for a change. Kind of shocking, given my usual practices. But it leaves a little room for holiday-making, and I guess we all need that now and then.

I might even bake them a cake tomorrow. I’m tempted to try a bicolor one with green pandan and yellow forsythia. We’ll see. 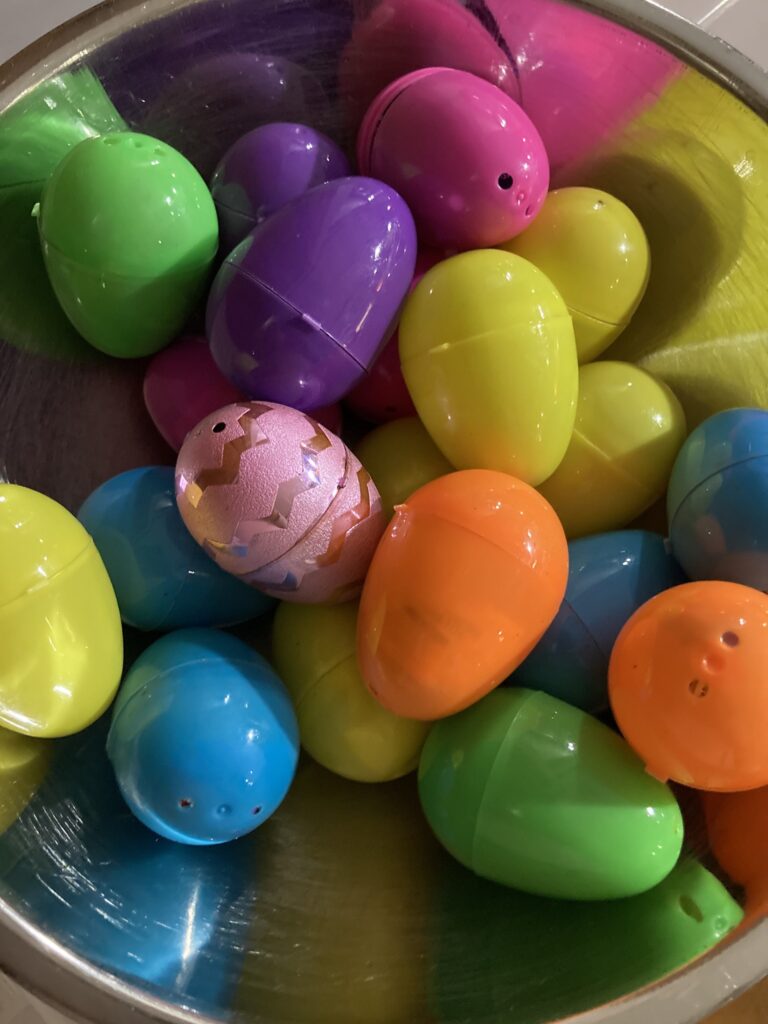