Progress photos. I’ve accumulated a fair number of faux flowers over the years, and wanted a way to organize them that was also ideally pretty — I cut a big square of bird netting and nailed it to the wall, and that seems to be working fairly well, in a slightly haphazard way. Little floral punch as you enter the basement and head into the first area, for the garden. 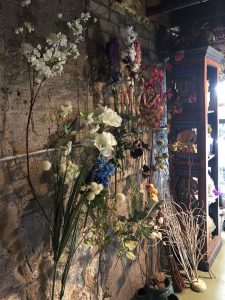 That tall cabinet is still chock full, but at least it’s chock full of garden stuff. I’m going to ask Kavi to take all the pots out, sort them by size, and store them in the low grey cupboard (which the kids emptied for me last night). Then I can organize it more effectively with garden-related miscellany. Both of those pieces from Nadeau (our branch is in Ravenswood), btw, which is my go-to for relatively cheap Indian / Indonesian furniture. A good third of our furniture is from there. Solid wood pieces, often charming, not necessarily the most smoothly assembled, but if you can live with that, recommended. 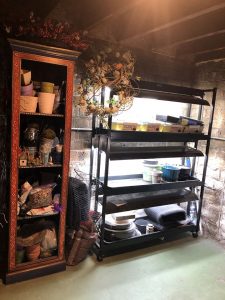 The grow light assembly was a gift from Jed years ago, and I have only successfully used it once so far, because I somehow am often too harried to manage to get seeds started, but I cleared it off yesterday, and I am hopeful that I can actually start some seeds this week.

It’s not too late, right? I’ll be using leftover seeds from last year, because I still have lots and I know some won’t be viable, but it seems a shame to waste them. I stored some of them in the fridge… well, we’ll see. It seems worth a shot, though there is the problem of remembering to water them, and we had a leak, so the basement sink water is shut off right now, until I can get the plumber out. In the queue… 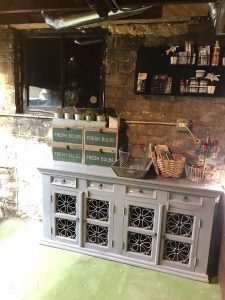 The bulb boxes are holding some of my dahlias from last year, but only the ones from the front, because I had an epic fail this year — the dahlias and glads from the back, I did manage to dig up, but then I left them out in the back yard, meaning to get back to them to finish prepping and storing them, and instead, got busy and forgot, gah, so they all got snowed on and froze and rotted. SO frustrating after I went to the work of digging them out. Felt v. dumb.

Ah well — let it go, Mary Anne. Try to think of it as an excuse to try out some new dahlias this year, yes? If the budget allows, or if someone in the garden club is willing to trade…. 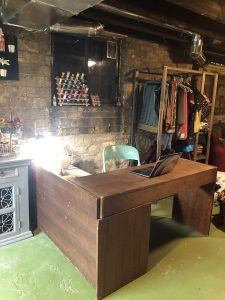 And the sewing table is clear again. I love this table, you know. It has come with me since college — not across the country, because Roshani stored it for me while I was living in other cities, but then she kindly returned it again when I moved back, and there’s something about it that I just really like. It can collapse into a more compact form, or expand into this L-shape, or even be angled, which was how I had it in my first apartment in college, in a bay window.

It’s also completely falling apart — the drawer backs have come off, the edges are raw and rough, it’s sort of a mess. But functional enough for a basement. I’ll hang onto it for now, and who knows? Maybe one of the kids will want it for their college rooms or first apartments as adults.

There are some pants there, waiting to be hemmed, as well as saris that need blouses (which I’ll get made by a professional; they’re just there as a place to keep them until I have time), and a host of other small mending / altering jobs that are within my skill set. Also a few pieces of jewelry that need chains mended, which I should be able to do with my little set of jewelers’ tools, and a couple needle-felting projects in process (stabby stabby), and even a little stuffed platypus kit that Karina gave me ages ago, if I feel caught up enough to be able to do a fun little recreational bit of sewing.

It makes me feel much calmer, going down and seeing at least two small areas organized now. I think it’s an ADD thing, that I just completely can’t work in chaos — my mind goes ARGHHHH. That kind of thing doesn’t seem to get to Kevin at all — he can just tune out what’s around him and just focus on his work. Jed too. I can’t even handle a crowded computer screen, or multiple browser tabs open, but those don’t bother them at all!

Well, at least I have had the time recently to be able to make some progress here. I’ll be grateful for that.