Mostly VR stuff, with exercise and specifically boxing notes: I’ve been sick and harried enough for a while that I haven’t been exercising, I may have mentioned. Yesterday, I finally felt well enough that I actually wanted some physical movement (beyond the 10K steps / day that I generally get without trouble just in the normal course of my regular activities), so I pulled out the VR set-up around 9 p.m.

I did a few rounds of Beat Saber, and was pleased to stomp Jed‘s high score on the first run (for playing at my house; I’m sure he has a higher score on his set-up at home). Then I tried to get a full combo at my favorite song on hard mode — after three tries, each of which I missed just one block (!), I decided I was a little too tired for attempting perfection. I ran the demo of Space Pirates and shot some attacking spaceships, which was satisfying, and then I tried the boxing demo for the first time. Whoa.

I hadn’t done that kind of physical fight thing in VR before, and I have to say, it was sort of shocking how real it felt. My adrenaline swung into high gear, and I almost couldn’t think straight, because he was right there, and I just wanted to punch and punch and punch him so he wouldn’t punch me. I was utterly exhausted after one round, because I’d been punching pretty much constantly.

I threw a lot of wild swings, and mostly forgot to defend myself, and even though I actually hit him a lot (this is the beginner training level, after all), I was too flustered to try to manage any kind of organized combo that would lead to a knockout. I’ve done a fair bit of boxing in Wii Fit, which trains you with combos and such, but I forgot all of that, in the VR physicality of this.

It was sort of unnerving, and makes me wonder how VR becoming more prevalent will affect us all generally. It also means that I suspect if I’m ever in a real fight, I might end up screaming like a banshee and attacking wildly, as if I’m actually a foot taller than I am. That sounds like something I’d do. Maybe this summer I’ll find the time to actual take some martial arts classes again; I did like them, the one time I did them. But time, time is the limiting factor, always.

I played a little Moss to chill out, afterwards, which was nice. Just me and the little mouse, wandering around in a lovely forest. (Although I did have to look up how you’re supposed to interact with the blocks — it was not intuitive to me that I could do things with my own hands too, rather than just moving the little mouse around.) 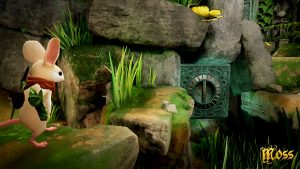