I had a moment when I stepped out of my car on campus today when I thought, “Really, Mary Anne? After 10 years teaching in Chicago, you haven’t learned that it will be 10 degrees colder on campus than it is in your backyard, and that you really do want the BIG coat? Fool!”

I made it home without turning into an icicle, but I think the main goal for the weekend will be to lie in bed watching TV (just started watching the second season of Making It!, appropriately enough, v. cute, and it’s hilarious how Amy Poehler and Nick Offerman mock the excessive drama of so many reality TV shows like the Master Chef season I just finished watching) and try to finish the scarf I started in Seattle. I mean, I have scarves. But in Chicago, it never hurts to have MOAR scarves. 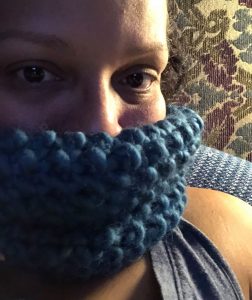 This one has just become long enough that I can try some of it on and see if I actually like how the color / pattern / yarn looked on me. I vote yes.

🙂 I don’t go back to campus ’til Wednesday (because of MLK Day), so there’s a good chance I’ll be able to finish it by then. Hooray for chunky yarn and huge needles. 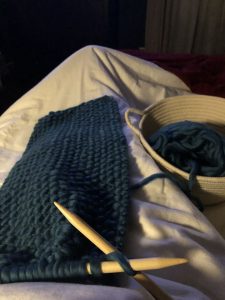