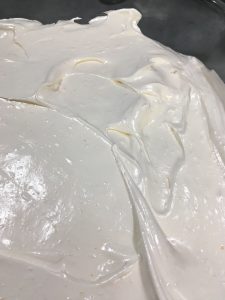 This makes a delicious and cravable spoonable dessert (you might want to stir in some chopped fruit to grace it, or sprinkle with sliced almonds).
NOTE: The egg whites won’t be cooked, so you may want to use pasteurized egg whites for food safety.
(45 minutes + cooling time)
1/2 c. passionfruit puree
2 t. powdered agar-agar
1 1/2 c. granulated sugar
1 c. light corn syrup
1/4 t. salt
1/2 c. water
3 egg whites
chopped fruit (optional)
1. Combine passionfruit puree and agar-agar in bowl of stand mixer (whisk attachment). Stir briefly to combine.
2. In a small saucepan (a bigger one will be heavy and hard to hold steadily at a later stage) combine water, granulated sugar, corn syrup, and salt. Cover and cook over medium high heat for 4 minutes. Uncover and cook until the mixture reaches soft ball stage (240 degrees if you have a candy thermometer), approximately 12 minutes. Once the mixture reaches this temperature, immediately remove from heat.
3. Turn mixer on low speed and, while running, slowly pour the sugar syrup down the side of the bowl into the agar mixture. (Be very careful with the sugar syrup, as it is scaldingly hot and will burn you badly if it gets on your skin.) Once you’ve added all of the syrup, increase the speed to high.
4. Continue to whip until the mixture becomes very thick and is lukewarm, approximately 12 minutes. Add food coloring, if using for the whole batch, during this stage; it will be a creamy color if no additional coloring is added.
5. Add egg whites and beat an additional 5 minutes or so, until notably increased in volume.
6. Turn off mixer, remove whisk, and with a spatula, gently fold in chopped fruit if desired. Pour the mixture into a large serving dish, spreading it evenly.
6. Chill fluff for at least four hours, and then serve.
Menu