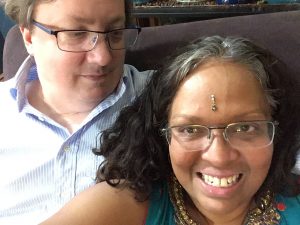 I wonder if Kevin realized, back when we first started dating more than twenty-five years ago that he would, several times a year, be drafted into being support staff for massive cooking efforts. I cooked for pretty close to three days straight for this party (with a 6 hour break on Friday for teaching) — apparently, this is my version of a marathon. It is utterly exhausting (I plan to sit on the couch all day today), but also super-fun in some hard to quantify sense.

Part of it is the cooking itself — running through mostly dishes that I have made so many times that I can make them without thinking, utterly on autopilot, while mixing in a few that are stretches for me, or new experiments. Tasting to make sure I remembered the salt, and the lime juice. Finding new shortcuts — the biggest help this year was a combo: 6 bags of frozen chopped onions from Pete’s (I cleaned them out), sautéed Thursday night in big pots with cumin seed, mustard seed, and from-a-jar chopped ginger and garlic. Just dump them in the pots with some oil, bring to high, then turn it to low and let them sweat down for 45 minutes or so — you barely need to stir. My mom told me she’d started doing that recently, making the onions in advance and then just portioning them out for each curry, and it’s a huge timesaver.

A lot of the fun is the logistical challenge of it, which I kind of love — it stretches a part of my brain in enjoyable ways. My little scribbled lists are all over the place — here is the next grocery list. Here is the complete list of dishes. Here is the list of tasks for day of party, in time order. 2:00 – set out tables, chairs, and tablecloths. 2:30 – assemble fruit and veggie trays take cheese out of the fridge. 3:00 – make punch, shower and dress. 3:30 – start frying appetizers. 4:00 – party! Here is the list of tasks to hand off to other people. Four different grocery stores to get the right ingredients in three days. Planning the schedule so that everything gets done in time, and that hot things come out hot.

One microwave + one stove make this last a pretty serious element of the challenge — some of my friends have a second stove in the basement, which would definitely simplify that, but I can’t justify it for using it 2-3 times / year. So we scramble and plan a bit instead, and are grateful that Amanda is willing to take on the task of putting things into the microwave and pulling them out again, stirring and testing as she goes. In a few years, Kavi will be old enough to handle that task, but she’s not quite there yet.

The Sri Lankan appetizers (which we call ‘short eats’) are particularly labor-intensive. I could have had some catered (the rolls and cutlets, from a Sri Lankan family up near Devon), but I like mine better. So that entails several hours of additional people’s labor — Kat and Michael and Kavi on Friday night, making cutlets and crepes for the rolls, Kat and Michael again on Saturday early afternoon, egging and breading the cutlets, assembling and slicing the ribbon sandwiches, and a host of early party attendees on Saturday late afternoon, egging and breading the rolls, while I stand at the stove and fry everything.

That last is actually something I’d like to hand off, so I could be talking to guests as they arrive — but if you’re not used to deep-frying, it can be intimidating. Maybe next time, I should find a party guest in advance willing to deep-fry for me, or be sure Kevin won’t be busy with other things then. A lot of this requires delegating, which is complicated by the delegated folks’ needing the skills for it.

In twenty years, perhaps I will have trained a little coterie of locals in the subtleties of rolling cutlets and assembling rolls. Kat’s mackerel cutlets were rolled perfectly this time — honestly, she’s neater than I am. And Michael P. brings his scientist background to the ribbon sandwiches — the fillings were so finely distributed, they looked completely professional. Somehow, it all comes together in the end. 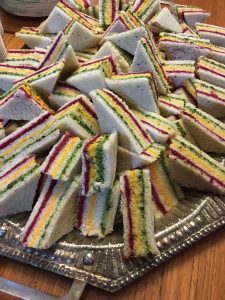 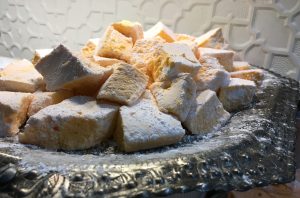