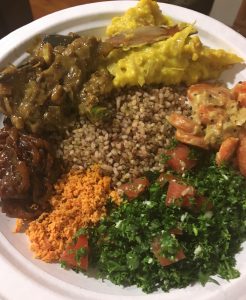 This was a fun one for me — an entirely vegan dinner, that I did for last week’s board game night. Pretty easy with Sri Lankan food. Going around clockwise: lentils in coconut milk (tons of protein), carrot in coconut milk, kale sambol, coconut sambol (spicy), seeni sambol (spicy and sweet), eggplant curried in coconut milk, with red rice / quinoa in the center.

If I were doing it again, I’d make more of a bed of red rice / quinoa — I had to go back for seconds on that to happily eat the rest, get the balance right in each bite. And I’d dice the onions for the lentils instead of slicing them — they were a little too noticeable when paired with the sliced onions in the seeni sambol.

This was plenty of food for the number of people we had, but for a larger dinner party, you could expand the plate’s options.

I’d add papadum for crunch, probably some lime-masala mushrooms for the tang. Devilled potatoes would add a luscious spicy-tomato element, though you could also just add tomatoes and potatoes to the eggplant curry for similar effect. Cashew curry or chili cashews would add another hit of protein in rich, nutty form. And while I’ve never had a raita without yogurt, I wonder if you could do something similar with coconut milk, for another cold element.

Proper balance of varied flavors for a Sri Lankan dinner party is an art form! But making it vegan was no more difficult than vegetarian or with meat, it turns out.