A little travel food blogging while I’m on vacation and not cooking! 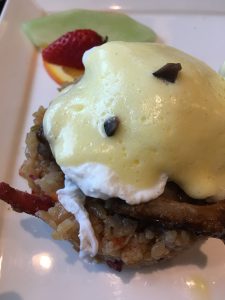 Yesterday’s breakfast at Tango Cafe, which is a Swedish place recommended by a local. I bypassed all the Swedish fare and went for a loco moco benedict — a cross between a traditional Hawaiian loco moco and eggs benedict. A big stack of fried rice with plenty of meat in it, then braised beef on top, then a poached egg and hollandaise sauce. Two of them! It was delicious, but a *lot* of rich food — I ate just one of the pair of them, and then rolled out the door. (Maybe it was unwise asking the probably 20-year-old young Hawaiian man serving us what he liked on the menu — I’m guessing he consumes twice as many calories in a day as I can manage. 🙂 )

I didn’t know anything about Hawaiian food when I arrived here, so Jed kindly forwarded me a nice Wikipedia page with fascinating info — it reminds me of Sri Lankan food in many ways, with the different European influences. But also wildly different:
“The cuisine of Hawaii incorporates five distinct styles of food reflecting the diverse food history of settlement and immigration in the Hawaiian Islands.[a] In the pre-contact period of Ancient Hawaii (300 AD–1778), Polynesian voyagers brought plants and animals to the Islands. As Native Hawaiians settled the area, they fished, raised taro for poi, planted coconuts, sugarcane, sweet potatoes and yams, and cooked meat and fish in earth ovens. After first contact in 1778, European and American cuisine arrived along with missionaries and whalers, who introduced their own foods and built large sugarcane plantations. Christian missionaries brought New England cuisine[1] while whalers introduced salted fish which eventually transformed into the side dish lomilomi salmon.
As pineapple and sugarcane plantations grew, so did the demand for labor, bringing many immigrant groups to the Islands between 1850 and 1930. Immigrant workers from China, Korea, Japan, the Philippines, Puerto Rico and Portugal arrived in Hawaii, introducing their new foods and influencing the region. The introduction of new ethnic foods, such as Chinese char siu bao (manapua), Portuguese sweet bread and malasadas, and the Japanese bento, combined with the existing indigenous, European, and American foods in the plantation working environments and in the local communities. This blend of cuisines formed a “local food” style unique to Hawaii, resulting in plantation foods like the plate lunch, snacks like Spam musubi, and dishes like the loco moco.”
And if you follow the link on the last: “Loco moco is a meal in the contemporary cuisine of Hawaii. There are many variations, but the traditional loco moco consists of white rice, topped with a hamburger patty, a fried egg, and brown gravy. “
Menu