Facebook Instagram Youtube Twitter Patreon Shopping-bag
Menu
“In challenging economic times, library usage always goes up, as so many Americans turn to their local libraries for help with schoolwork, job searches, and more. Mary Anne Mohanraj is an Oak Park library patron, a mother, a writer, and an English teacher. Equity and access are central to her progressive vision of what our libraries should be, and she is committed to making sure that our libraries work hard to serve working people, reaching into their neighborhoods with services such as pop-up libraries and senior shuttles, and expanding hours so less wealthy families can have the access they need to computers and books. Mary Anne believes that our libraries should serve the needs of all Americans.”
— Jim Dean, Democracy for America
http://democracyforamerica.com 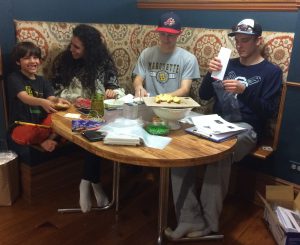 Anand Whyte, Zeina Yacoub, Roy Iversen, and Brendan Barrett, stuffing door hanger bags prior to canvassing for my campaign! (Okay, Anand was mostly entertaining them with Terraria conversation.) Thanks so much to Democracy for America for their endorsement and donation, which helped me actually pay some of my student canvassers a bit for this final week of work.
So far, this campaign has mostly run on tons of volunteer labor (mostly local moms), and I couldn’t possibly have paid everyone who helped out. But it’s very much in keeping with my political ideals that we pay at least the student workers as much as we can. Maybe some of them will be bitten by the political bug and get more involved going forward! Grass-roots change for the win. 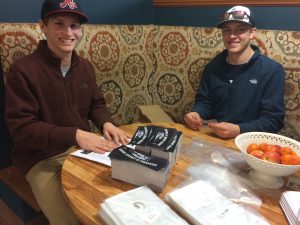 Daniella and Allison Baxter, doughty door-hanging volunteers! I would be lost without them! 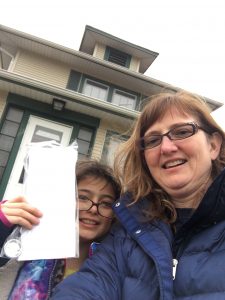