Thanks to Carollina Song for putting together a packed event at the library the other night, with activists Ai-jen Poo and George Goehl, centering on where we go after the women’s march. I hope Paul Goyette will forgive me borrowing the pic he posted of me and Karen Kurtz Fischer — it’s much less blurry than the other photos, which are all mine. 🙂 In my defense, I was sitting way in the back. 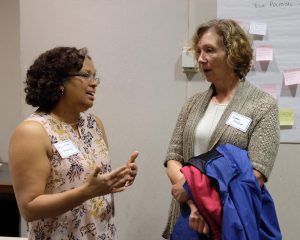 The energy in the room was great, but I admit, I was a little worried by the post-its on the walls, which had invited people to share their concerns — so many people had written that they felt bombarded by all the different ways to get involved, that they couldn’t keep up, and didn’t know what they should do. 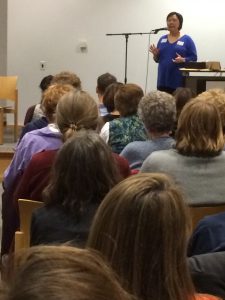 Folks, please. Take a breath, center, think a little about where you can actually sustain ongoing work. You don’t have to do everything; you can’t do everything. If you can be core in one area, and more tangentially support several others, that would be amazing. 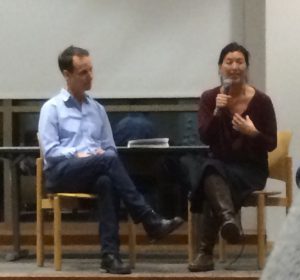 And please, please consider lending your energy to your local Democratic Party. They are already gearing up to fight for 2018; they could use you now. If the Democrats aren’t what you want them to be, well, if you show up and argue, you can change the shape of the party. It may be a machine, but it’s a flesh machine — it’s incredibly malleable, because it’s made up of people.

But you do have to be in the room where it happens.