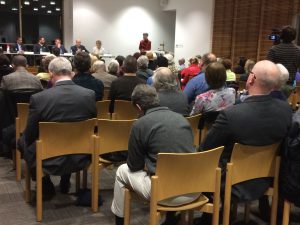 We’re just about one month out from the election, and the schedule is getting intense. There are now enough events happening that I physically can’t make it to all of them — they’re often cross-scheduled, as with tonight’s voter registration drive hosted by Suburban Unity Alliance and the library board candidate forum hosted by Buzz Cafe. (I, of course, had to be at the latter, and I think it went well!) I’m trying to get to as many local events as I can, and it’s exciting and invigorating and exhausting; I plan to fall into bed on April 5th and maybe not get up again. Until the library board meeting, that is. 🙂

The photo below is from last night’s trustee candidate forum at the library, which was fascinating — two months ago, I don’t think it would have occurred to me to attend such a thing. Now, not only do I go to all of them I can, I’m going not just as a candidate myself, but as a citizen. As the crowd asked the trustees questions, I realized that I had, over the past two months, developed answers on every one of those questions — I’m not even running for trustee, but you know what? I have OPINIONS.

I have an opinion on the new building being proposed next to Austin Gardens park, I have an opinion on the D97 school referendum, I have opinions on the use of TIF money to develop the blighted stretch on Madison — I didn’t even know what a TIF was two months ago. It actually doesn’t take that long to get up to speed, if you go to a few meetings, pay attention, and ask questions. I am more than a little embarrassed that it took November’s election to kick my butt into civic gear.

Just to give you a sense, here’s what I’ve been attending — some of them are more social events, to meet voters and learn their concerns, some are more explicitly political. I’m not including the various meetings with volunteers or phone conversations with my finance person!

1/30 – knitting club
1/31 – school board referendum meeting at library, OP Indian ladies night
2/1 – Buzz Cafe – Democracy for America meeting
2/4 – friend’s birthday party (and yes, with her permission, I campaigned there)
2/6 – Village Hall welcoming city immigration meeting
2/10 – book swap and candidate meet-and-greet hosted by a friend
2/11 – Democratic monthly meeting, lunch with fellow candidates, hosted board game potluck for OP Progressive Women (and I thought about hitting the last hour of the local LGBT potluck too, but my will for driving somewhere else at 9:30 at night failed me)
2/18 – hosted LGBT clothing swap benefit
2/19 – refugee hosting meeting
2/21 – LWV school board candidate forum
2/22 – presentation on interacting with elected officials
2/28 – phone conference with CrowdPac about featuring my campaign (they like it!), OP Progressive Women happy hour
3/1 – LWV trustee candidate forum, garden therapy at senior center
3/2 – library candidate forum at Buzz
3/3 – friend hosting a meet-and-greet for me, plus trivia night

Oof! Retail politics is very very retail. I’m a social person, but I admit, at the end of the night, I do tend to come home and huddle up with a book for an hour until I feel ready to face people again. 🙂 Next week, starting Sunday, there’s an event every night, and two on Sunday! Wish me luck.