Serendib garden journal: I love to travel, but it is hard to leave when the garden is blooming — I’m always afraid of missing something. When I left, the columbines and bleeding hearts were in full swing, but I could see that the irises were about to start, and the lilacs were beginning to bloom. I just planted those lilacs last year, and they hadn’t really gotten going yet, and I didn’t want to miss them.

I planted them for Kirsten, one of our best, oldest friends, who loves gardening, and especially loves lilacs. They always make me think of her. And then I went on my trip, and came back a week later, and it was okay — I hadn’t missed them. The lilacs were still just opening their buds, and I cut some, and brought them in, along with some columbines (aka granny’s bonnets) that had blown mostly down in the wind. And now my kitchen smells like lilacs, which is one of the best scents, and sometime soon, I will call my friend, and talk to her about her garden, among many other things.

(And speaking of friends, the columbines are freely self-seeding, as promised, and I already have quite a host of them, in a variety of colors, and can easily spare a few to other gardens. Locals, could you use a columbine?  Julie, Nara, Toni?) 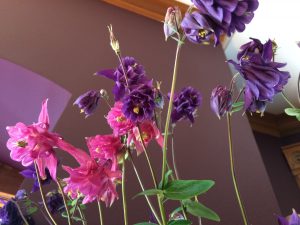 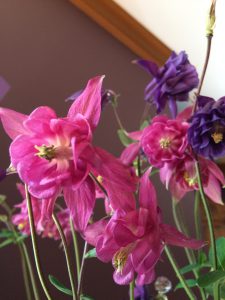 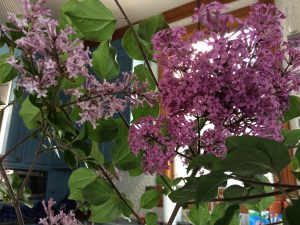 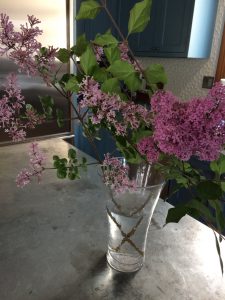