Facebook Instagram Youtube Twitter Patreon Shopping-bag
Menu
So, our kitchen countertops have been something of a saga. Our original plan was zinc for the island, and soapstone for the countertops. They're both historically-appropriate materials, and also cool. Zinc ages the way copper does; it starts out bright silver, like stainless, and then develops a dark grey patina over time. It'll likely look blotchy, messy, and irritating for a while, but it'll smooth out. You can spray things on zinc to accelerate the patina process if you want, and we might, but at least initially, the plan is to just live with it, let it get fingerprints and lemon juice stains, etc. and so on. We'll see how long that lasts. :-) If you're interested in zinc counters and the various patina option, there are some great short videos here that demonstrate the process. They're not gripping drama, granted, but I thought they were kind of fascinating; I like watching craftsmen work and demonstrate their skills. We found a local fabricator to make them; he'll be delivering them in a couple of weeks. If they come out well, I'll try to remember to put his info up for anyone interested. 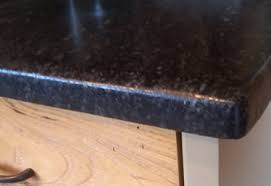 We picked soapstone for the perimeter counters for a couple of reasons. It's tough, like granite, but not quite as hard, making it less likely to break a plate if you drop it on the counter. It's heat-safe, unlike two other options we considered, zinc and butcher block, so it's nice to have next to the stove, where you can quickly slide hot pots over onto it. It's water-safe, unlike butcher block, so you don't have to be completely anal about wiping spills up quickly. And unlike granite, it weathers beautifully over time; the edges will get rounded and soft with use. Oak Park has a lot of old houses, and some of the ones we looked at while house-hunting had soapstone counters; they look fabulous after a hundred years, softened, almost as if they've grown there. Kev and I were frustrated to find, when we went to pick the soapstone slab, that you basically can't get the kind of soapstone we wanted. The old soapstone was very uniform in color, a light grey that you oiled to get a dark grey. You oil it once a month or so (whenever you want your darker color back), and over time, it darkens. Eventually, you don't need to oil it anymore. But you can't get the uniform soapstone anymore -- we went to three different stone warehouses, and called a couple of fabricators, and they all said the same thing -- the only kind of soapstone you can get right now is the kind that has big pale veins, sort of like granite. They're white, with green undertones. It's still a little unclear to me exactly what the issue is -- whether the original type of soapstone is really just quarried out, all gone, at least until a new patch is discovered? Or, more likely, that what's popular right now is the stuff with veins, because people think it's dramatic and interesting, and so that's all they're bothering to quarry right now? I'm not sure. In the end, though, I think I found a slab we can live with. I picked one with as little big veining as I could find, and then our fabricator (DM Stone) laid out his templates for the kitchen countertops on the slab, so I could confirm before he cut. It looks like this: 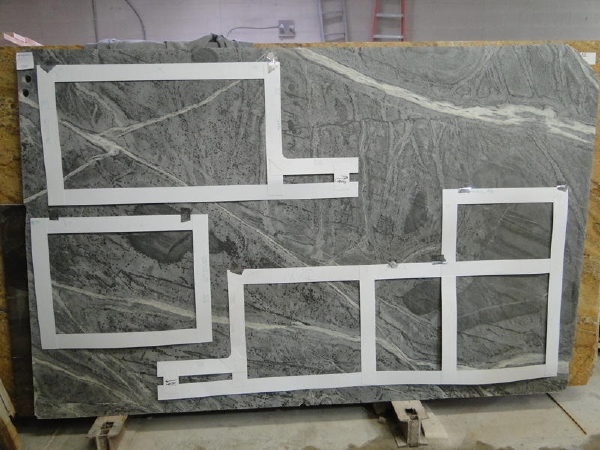 Still a couple of noticeable veins, which bugs me a bit, but I'm sure I'll get used to them quickly. I might even grow to like 'em. I think it'll be good. And more importantly, there's a big enough piece leftover after cutting (25" x 53") to make a little cabinet countertop for the espresso stand in Kev's study. So everybody wins. :-) By the end of next week, we should have perimeter counters installed, and a working kitchen sink. Yay! Moving day: TOMORROW!