The painters are making swift progress -- they'll be done with the first coat by the end of the week. Which is particularly impressive considering how much repair work they had to do on the plaster.

This is the kids' bath -- BM Linen White above, BM Stonington Gray below. Not the most exciting colors, but the floor and bench tile will be cobalt blue hexagons, and I didn't want the walls and ceiling to compete. It's also a small space, so we tried to keep it light and airy. Hopefully pale grey (suggested by my sister Mirna, thanks!) will be a nice backdrop to the white porcelain fixtures. I think it's pretty.

Most of the second floor is very simple -- just BM Linen White everywhere. Choosing the paint colors for the first floor and kids' rooms was kind of exhausting, so we went very simple here. But I think it'll be a nice effect -- I was basing it off some photos of Sri Lankan homes I have -- lots of off-white with dark wood. Serene, especially with a goodly amount of green vegetation about. The walls and trim will all be a dark walnut when finished, so you can try to picture that. Say hello to Pete, our main painter, working here on my turret study. He likes my paint colors, so I like him. :-) 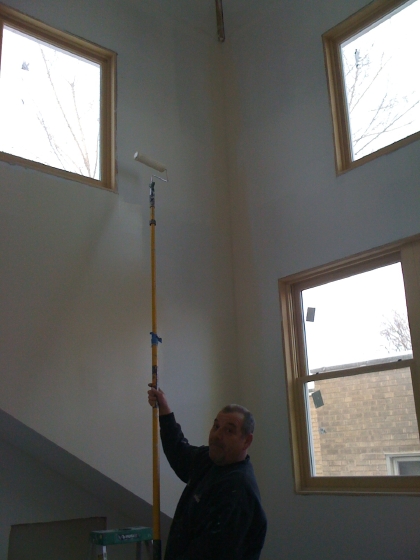 In the library arch, you can see the wall color swatch I painted, with a little piece of dark red paint color taped up to it -- that's because we're doing the inside of the arches in color. It'll be mostly hidden behind books once the bookshelves go in, but I think the color will be lovely and rich peeking through. It's BM's Raisin Torte, and I chose it to try to pick up some of the colors from the existing stained glass window. 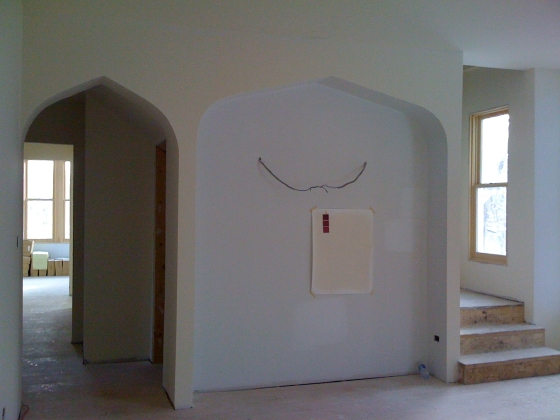 And here's Pete, putting the color up! So exciting! 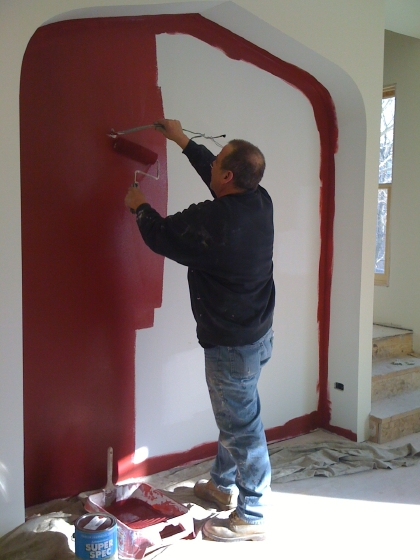 I love the finished effect. Rich and lush -- this isn't going to be a classic library panelled in wood (way out of our budget), but I think it'll be very pretty. 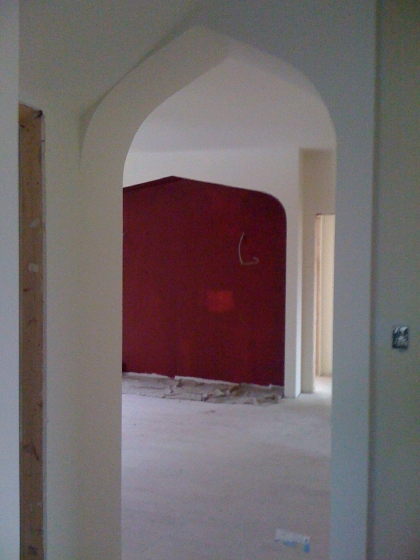 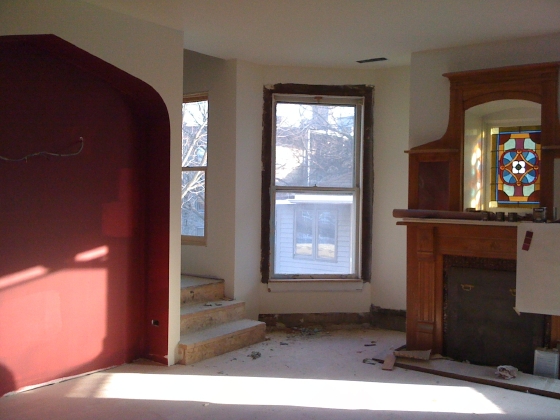 Now I just have to figure out what to do with the fireplace tile. Dark brown? Honey? Dark blue? (Again, trying to pick up the colors from the existing historic window, which will set the tone for the decor in the room.) We're taking out the existing hideous dark brown tile (Pam really likes it, but I hate it -- there's no accounting for taste), and for now, filling in the nonfunctional fireplace itself with tile. So I need tile to replace the tile surrounding the hearth, tile for the hearth itself, and tile for the bit on the floor. (I don't know the names for all those areas, but I bet they have names. I have learned that everything in architecture has a name, every little bit and bob.)

Whatever we put in will need to be cheap, because at some point, we may take on the massive task of making the fireplaces functional. If $50K somehow falls into our laps. They were coal-burning originally, which is no longer legal, and are too shallow for gas or wood. So retrofitting them would be a major endeavor. Sigh.