It was thrilling when they put the windows in; somehow it started feeling much more like a house, rather than some odd assemblage of wood. We tried to squeeze in windows wherever we could, while still staying true to the architecture of the house. When we were house-hunting, I hated seeing how many lovely Craftsman and Victorian homes had added glass block walls in the 70s. Glass block has its place, but not in those houses! Kevin did keep telling me that if we bought the houses, we could change that out again, but it was very hard to see past the block that was already there. (Because it was opaque, get it? Ha ha.)

Below are the new windows looking onto our backyard, which will someday be green and grassy, rather than full of construction vehicles and port-a-potties. Although there will still be a big apartment building across the alley -- oh well. 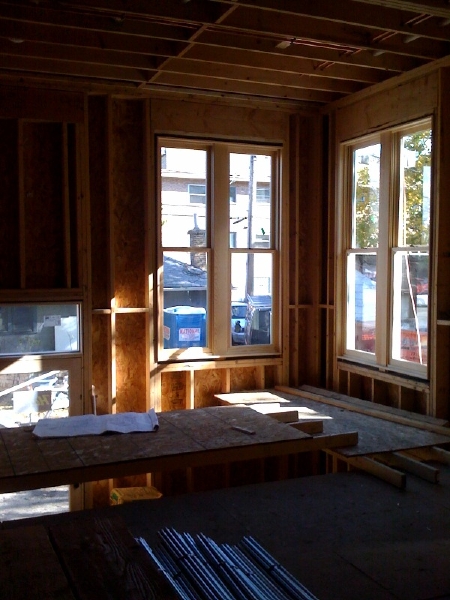 Some of our views are even worse -- the one over the kitchen sink, for example, faces straight onto the apartment building a few feet away. So we got a picture frame of glass for now, and will have a local glass place make a stained glass window for it when the budget allows. I would do it, but I think what we're going to put in there is a fairly basic medieval diamond pattern in varying types of obscure glass -- that kind of pattern is both difficult to execute (the straight lines and repeating pattern are unforgiving of errors) and kind of boring to make. It may be a while before we can afford that, but even staring at a brick wall is better than no window, I think. More light. 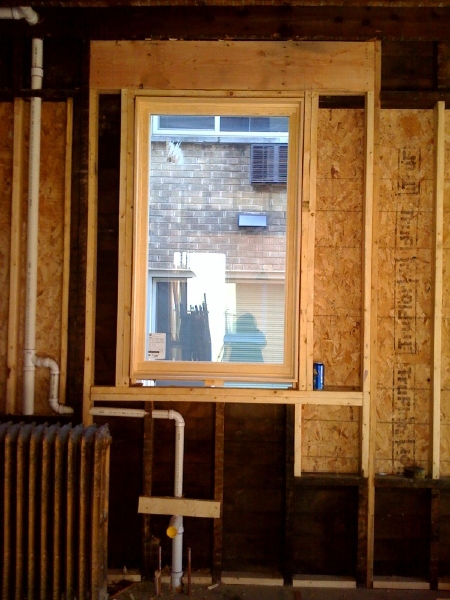 And while we're in the kitchen, can I show you our fabulous eat-in breakfast area? They've framed out the bench -- very exciting! It's very cute, tucked into the corner there, and I think will add a great spacious feeling to our rather narrow kitchen too. (Yes, we will be doing something to prevent children from standing on the bench and launching themselves over the side into the mudroom a floor below. Probably an ironwork grille of some kind.) And beyond it, you can see our new exterior back door, with transom above. I love transoms. 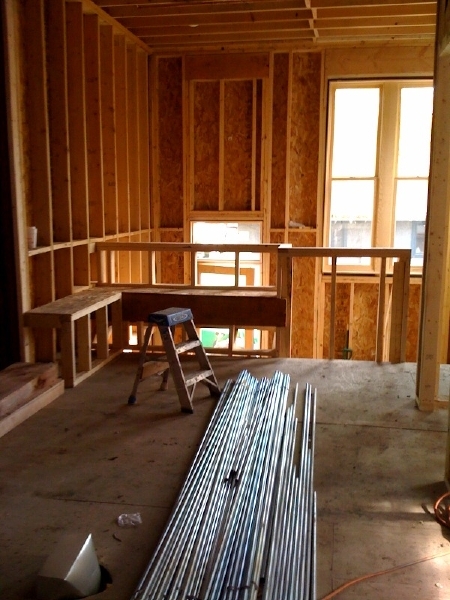 That eat-in was challenging -- we wanted to maximize seating, so wanted to push out a bit into the mudroom area, but also needed to maintain sufficient headroom for the stairs going down to the basement. Our architect figured out a clever solution (I think this is called cantilevered? Can you see how it slants down?), and Dobek framed it beautifully. 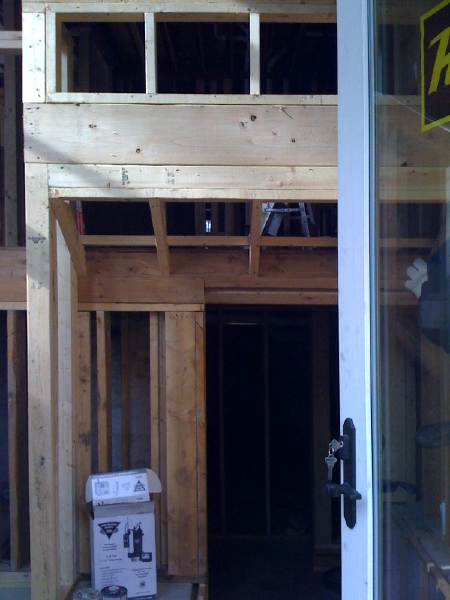 It did make the architecture of the mudroom a bit challenging in terms of usable space, but I think there will be plenty of bench/storage space, if in somewhat wacky layout. A short bench to the left, under the stairs, cubbies going up, possibly another bench behind the door, and definitely some coat hooks. It'll be fine, I think, thought requiring some creativity. Also, we probably can't afford to do anything except the hooks until next winter. But that's okay. 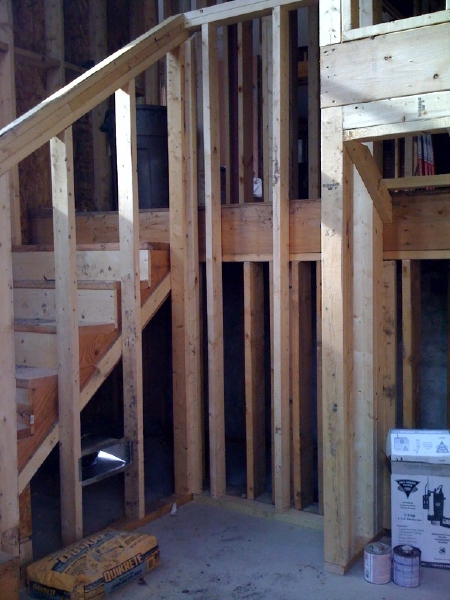 Here's the sliding door off the family room, leading to the little deck. We had a long debate about whether the grill should go on the deck or outside the mudroom door -- eventually, we decided on outside the mudroom door. It was a close call, though -- it does mean more stairs if you want to grill something and bring it back inside to eat, but it makes for more usable deck space under the pergola, and prettier views from the family room, which I think is more what we'd prefer. I don't like staring at a big metal grill. Would much rather look at trees and flowers. 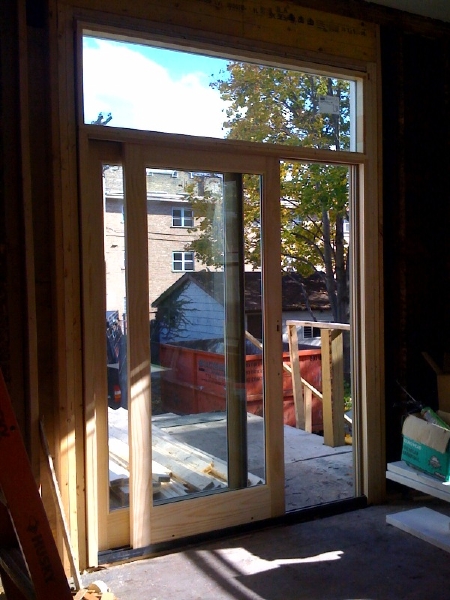 As we go upstairs, please note the electrical going in! Woohoo -- we have power! And I think the junction boxes (is that what they're called?) look pretty cool. 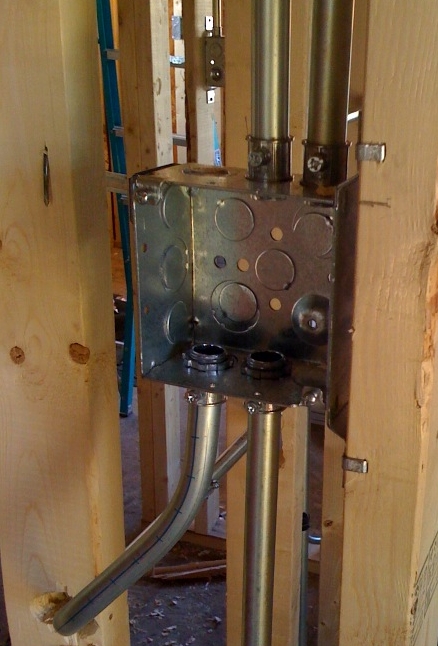 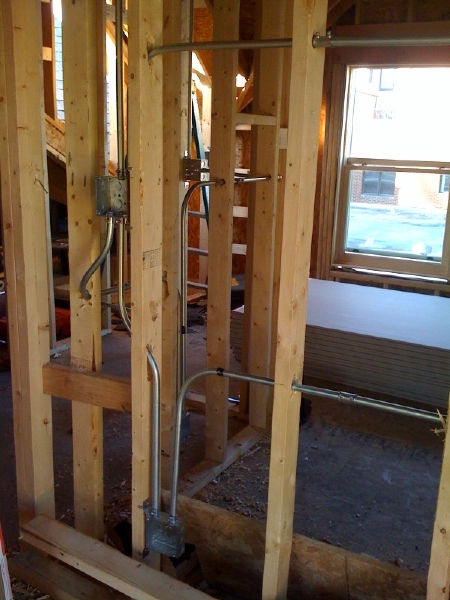 And here are a few more windows -- in the master closet / laundry, and the master bath. I am so looking forward to taking long, hot baths in that tub. 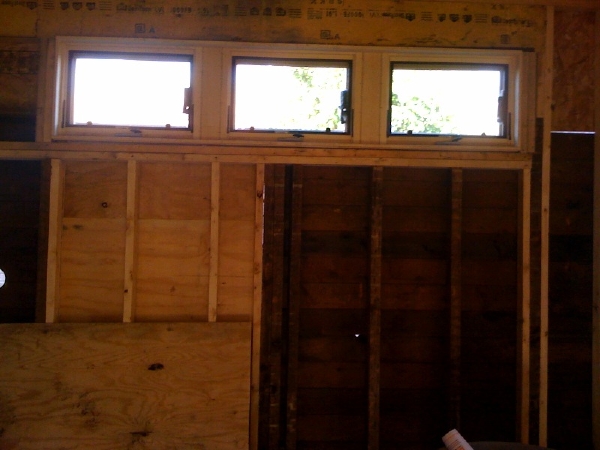 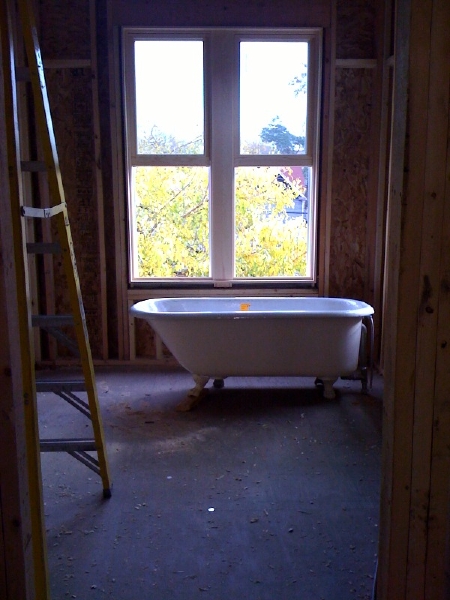 Up one more flight, to the kids' rooms. Here's the windows in what I think will be Anand's room (though Kev disagrees): 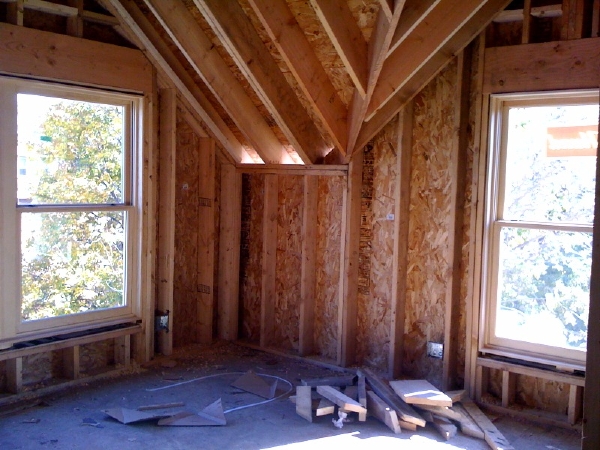 A few more cool details -- the metal tube that will turn into a laundry chute down to the laundry room... 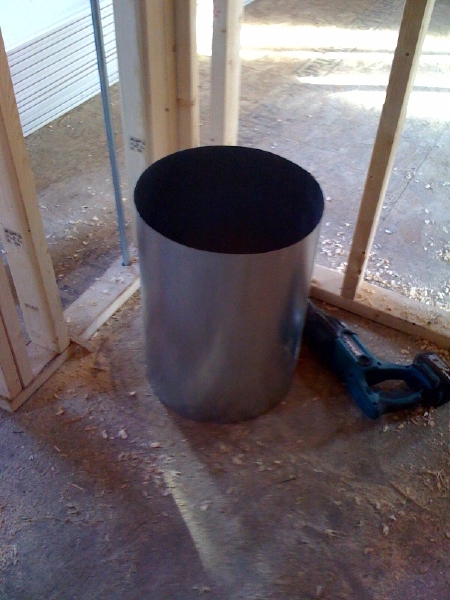 ...and the bench (covering necessary ductwork) that will sit behind the kids' clawfoot tub. It's wide enough that I can sit on it cross-legged, and I think is going to be covered with toys very quickly. 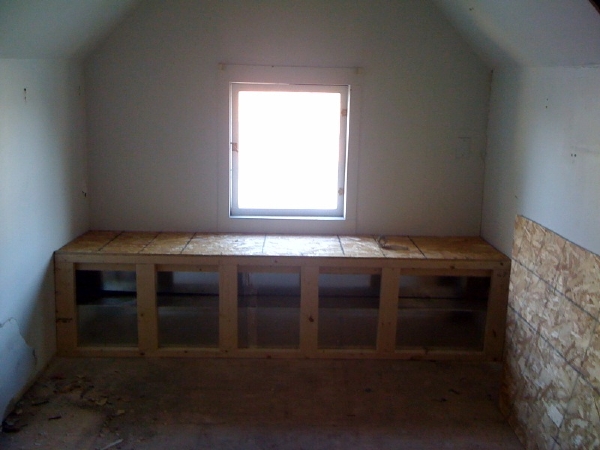 That's it for this update! Come back soon for the excitement of exterior siding and trim!