So as I think I've mentioned, we believe that the area in the NW corner of the house was originally a sleeping porch. It's hard to imagine now, since it seems so exposed, but on hot summer's nights in 1895, the family would take their bedding out to a sleeping porch to cool down a bit. In 1911, records show that many renovations were done to the house (that's when the original wide-plank pine floors were covered with thin strips of oak), and we think the sleeping porch was closed in then, since photos after that time do show the little closed-in triangle of closet. (Left of photo below, where the tiny window is.) 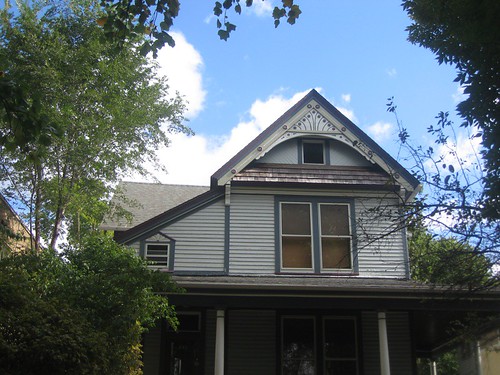 One of the owners before us clearly used that as a cramped little playroom, because it had a mural painted on the walls, pretty garden flowers, with a message to the children from their grandmother. I admit, I felt a little bad taking that down. 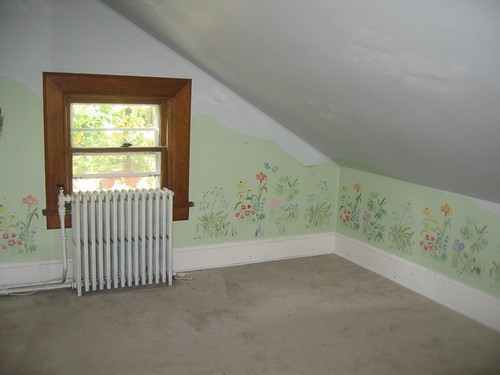 But the closet was really not useful to us, and I rather desperately have been wanting a home office, a room of my own. At one point in the whole housing search process, when it seemed like Kevin was going to get a home office but I wasn't, I even had a small feminist meltdown -- I kept thinking of Carol Emshwiller, and her stories about how during her marriage, her artist husband had this huge light-filled studio at the top of the house, and she had nothing for her writing. Carol's husband died young (in his 40s or 50s, I think), and she started really writing a lot and publishing after that -- most of her books I think she wrote between ages 50 and now (80+). She said that his death was what enabled her to write. Which is terrible. I don't ever want to think of Kevin that way.

And just to be very clear, Kev has been all in favor of my having an office at home. But at several points, it just didn't seem possible to have two dedicated offices -- one of them was going to have to be part guest room or part front parlor or some such, and the fact of the matter is that he needs seclusion more than I do to get work done. That's just who he is, as more of an introvert, and isn't a gender thing. But it was frustrating that it was then falling out along gender lines.

Anyway, as you know, we bought a foreclosure at half-price, and had enough money left over to add on. Our finished house will have four bedrooms (us, kids, guest) and two offices. The offices don't count as bedrooms because they don't have built-in closets, which is sort of funny -- I think that might even affect our property taxes. (I'm reminded of a house I saw on a tour in Charleston, that had floor to ceiling windows that opened onto a long balcony -- the guide said that owners were taxed based on how many exterior doors they had, and as a result, there was a wave of people putting in these huge windows that you could step out of. Funny!) If we do ever sell the house, we could certainly drywall in a closet to Kevin's office to make it count as a bedroom. Mine would be much harder to add a closet to (we'd have to carve into Kev's, I think), because my office is much smaller.

Now, you might be thinking -- hey, why does the man get the much bigger office? But no need to ruffle feathers on my account -- I wanted the little one, because it is the turret, and turrets are just cool. And really, all I want in an office is a cozy nook, ideally lined with bookshelves that I can stack books and papers and art objects on, with a nice wide table for typing at, a cozy chair to curl up in, a ton of natural light, and pretty sky and trees to look at. Which is exactly what I'm getting, even if my workable floor space is half the size of Kev's. Kev, on the other hand, needs an office where he can pace while he thinks about math, ideally with a big chalkboard, and a coffee station, and room to work with a colleague, scribbling ideas on the board. So floor space is a must.

Anyway, on to the pictures. This is where they've made the first cut into the slanted ceiling, letting in the light. It was such a dark space before that -- it had one tiny low window, and that was it. 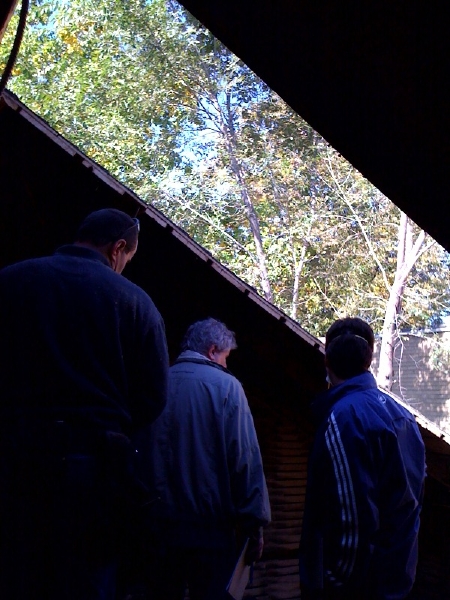 I love the geometry of the scaffold. As you can see in the photo below, we're actually keeping some of the original structure, on three sides, as a historic nod to the previous shape. We could have taken that out entirely, which would have given me a bigger office with a more normally rectangular shape. But it felt important to preserve an indication of the history of the house.

I think keeping that element probably also made the Historic Preservation Commission feel better about the whole thing too -- they originally weren't going to let us do the turret at all, since it alters the front facade of the house, and we live in a historic district. But it turns out, as I discovered by reading the fine print in the by-laws (always read the fine print!), that there are exemptions to the front facade rule for certain additions that are in keeping with the style of the house (ours is an Eastlake Queen Anne, I'm pretty sure). I can't remember the whole list of exemptions, but it included turrets, greenhouses, and oriels. If we'd had a Tudor house we were renovating, I would have totally wanted to add some oriels. :-)

For a Queen Anne, though, a turret is entirely appropriate -- really, the house should have had a turret to begin with, so I feel that we have remedied a sad deficiency, and the house is much happier as a result. It has been longing for a turret for a hundred years. 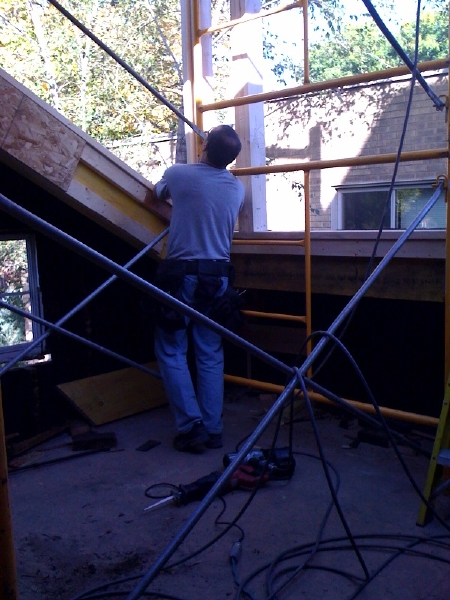 The walls start going up! And now you can see that triangle of original structure, including window, preserved from the outside. Sadly, the window frame crumbled away as they attempted to work around it, so we do have to replace the window itself. But it'll be a little prettier in the new version, since it's a single-pane casement, with no dividing lines. If you must lose historic, at least you can replace with prettier. (Really, it should have been replaced with an in-swing, as casements are strictly speaking not period-appropriate for my house, but in-swings are more expensive and harder to get. Shh...) 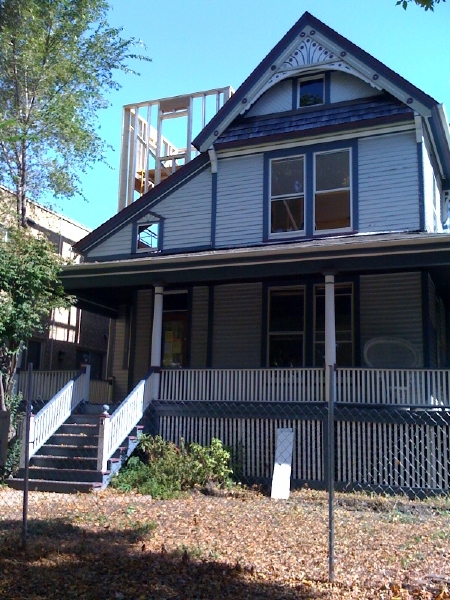 The walls are up! But oh no -- they've framed the ceiling to be flat! That's not right for a turret! It must be pointy! 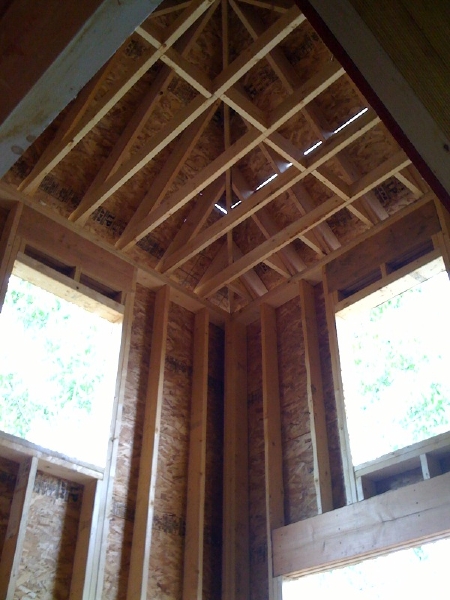 Whew! Those braces weren't structurally necessary, so they were able to take them out. Much better. 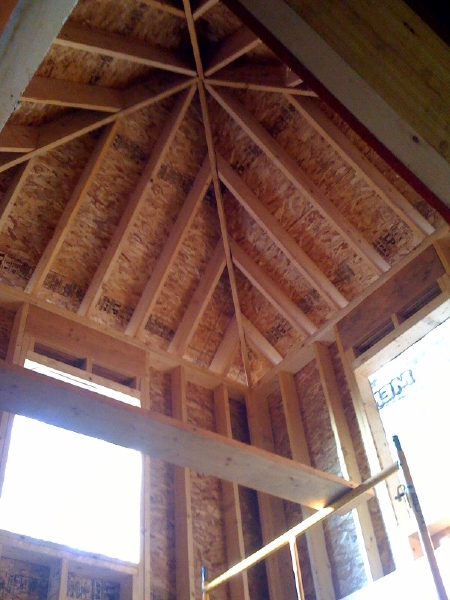 And there it is, all framed out and wrapped in house wrap. We had some freaking out at this stage, because from certain angles on the street, it seemed like it wasn't pointy enough. It looked weird. We thought about reframing, which would have been expensive. But sometimes with these decisions, you just have to wait a while, and it sorts itself out. After a week or two, the relative flatness had grown on us. It doesn't match the main peak angles on the house, but neither does that little odd triangle we preserved. Queen Anne's are supposed to be eclectic and quirky. We'll put a little roof cap with finial on top, and I think it'll be fine. 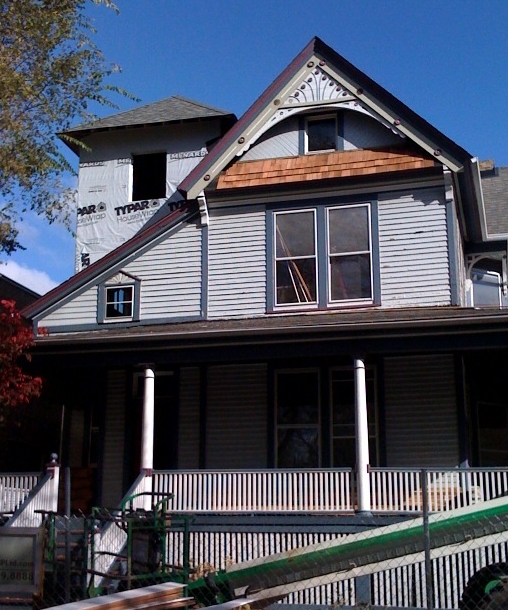 This is a recent photo, and let's you see the finished shape from across the street. Nice, right? Happy house with happy turret. 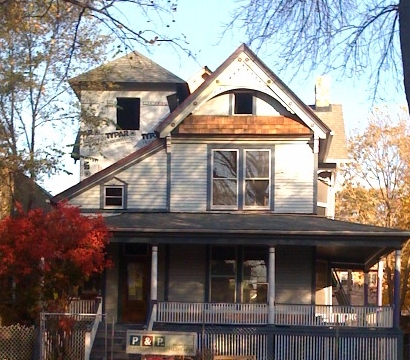 I also wanted to show you the burning bush (bottom left) in full flame. We took out quite a few of the overgrown bushes and stunted trees around the house, to maximize health of plants and sun for flower gardening. But we asked the contractors to please be careful to keep the burning bush alive -- the tree guy told us that it was the largest he'd ever seen, and he guessed that it was probably a hundred years old. That burning bush is practically a tree now, and it's kept company with our house for a long time, through a lot of changes. I'm very happy that it's still going strong. And so is our house.