Facebook Instagram Youtube Twitter Patreon Shopping-bag
Menu
Yesterday, when Kevin got home, he suggested that since it was bright and sunny, we pile the kids in the car and drive around Oak Park, looking at house colors. So we did, stopping at the library to pick up several Victorian exterior painting books (moderately helpful), and then ending up at our house, where we considered the various colors I'd put on the wall. It was fun, especially when Ron and Liz stopped by to help us with our considering. We also wandered around the yard a bit pulling up weeds, figuring out which shrubs need trimming, enjoying the just-starting-to-flower purple lilac bush (existing, needing pruning desperately), pink and white azaleas (I put in last fall, love them), white fothergilla (also like, but may want to move to a darker spot so it can brighten it up more with its white flowers). Fun.

I think we've narrowed down the body color to one of two, either Blueberry (which looks a little bright in sun) or Downpour (which looks a little dark in shade). They're on the same color card, so it's not so surprising that we like them both. We like them better than any of the other blues. So maybe we should just decide whether it'd bother us more to have our house a little bright in the sun, or a little dark in the shade? Any opinions? 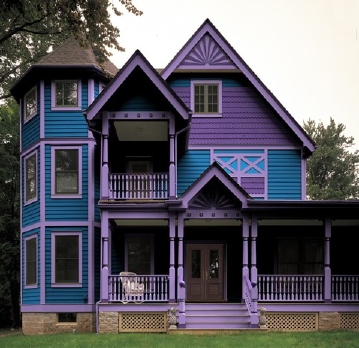 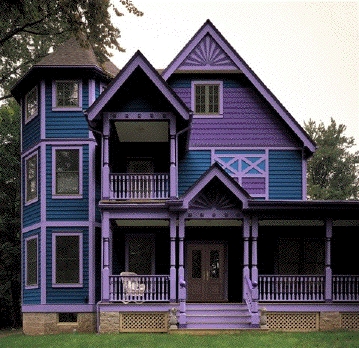 Kevin noticed (I'm not sure how he ended up there) that these colors aren't so different from my old journal pages. Yes, I like rich blues, sometimes with a hint of green. Now we know. :-)

You'll notice the absence of red in the photos above -- while we've agreed that we love Mystical Grape as a purple accent, and possibly Crocus Petal Purple as a lighter accent (replacing the white), we're not at all sure about having a red for the fourth color. I quite like Crushed Velvet as a red accent, but Kevin is less enthused about red accents in general.

So we're going to try greens -- I have no idea which green, but if you can imagine four colors on the house (adding in the light purple from above), and with a lot less of the green and much more of the blue, it might look something like this (I know the green is overwhelming, but try not to let that panic you, as there will be so much less of it on our actual house): 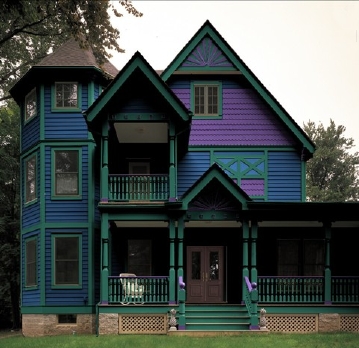 I think I like it. Blue / purple / green always makes me think of irises, which used to be my favorite flower. (I still love them, but once I started seriously gardening, I fell in love with too many flowers to have a favorite anymore. How can I choose between the scent of lilacs and the perfect shape of an antique rose, between the exuberance of a peony and the delicacy of a checkered fritillary? I can't. It would be too cruel.) Blue / purple / green is a very early spring combination, and early spring is by far my favorite season. (The other seasons won't be hurt if I neglect them, unlike all the rest of the flowers. :-)

I was so tired after all that, I fell asleep at 8:30. And then woke up at 3, which I suppose is unsurprising, since I haven't gotten more than six hours of sleep at night in weeks. But I could've slept 'til 5, if my body had let me. Stupid body.

It's okay, though -- I have a lot to get done today. I'm a little worried because Minal Hajratwala has come into town for an event I scheduled, and is supposed to be coming to my classes with me today, including one at 9:30, but she hasn't responded to any of the e-mails I sent over the weekend or yesterday. Minal, if you see this, call me! I want to call her, but you know, it's not even 4 a.m. yet. It might be just a wee bit too early. If I'm planning on picking her up from her hotel at 9 a.m., calling at 8:15 or so should give her enough time to get ready, right? I hope so. I hate to call too early, since she'll still be on California time. I hope she got in safely last night and went to bed early.

3 thoughts on “Yesterday, when Kevin…”