Facebook Instagram Youtube Twitter Patreon Shopping-bag
Menu
Even though we're making a lot of changes to our 1885 Victorian, we do love the old stuff, and are trying to preserve as much as we reasonably can. We're keeping the old windows with their storms, for example -- just stripping off layers of white paint and making sure the windows function smoothly. We need to take down an interior chimney (that used to run from a boiler that's no longer in use), but we'll be saving as many of the bricks as we can to re-use elsewhere. And so on. As you may remember, we were very sad when the flooring guy looked at our wood floors and told us they were too far gone to save. They'd been sanded and refinished so many times that the thin strip oak slats were down to the tongue-and-grooves; it just wasn't feasible to save them. So we sighed, and agreed to put in new wood floors. But then, while Pam was cutting into the flooring to get temporary furnace access for the Advanpro Calgary furnace repair contractors we hired, she discovered something wonderful. Underneath the thin strip oak, were layers of newspapers. And underneath the newspaper, there was....[drum roll, please]....another wood floor! Please note the scandalous article about Frank Lloyd Wright (famous Oak Park resident and architect) on the front page of one of those papers: 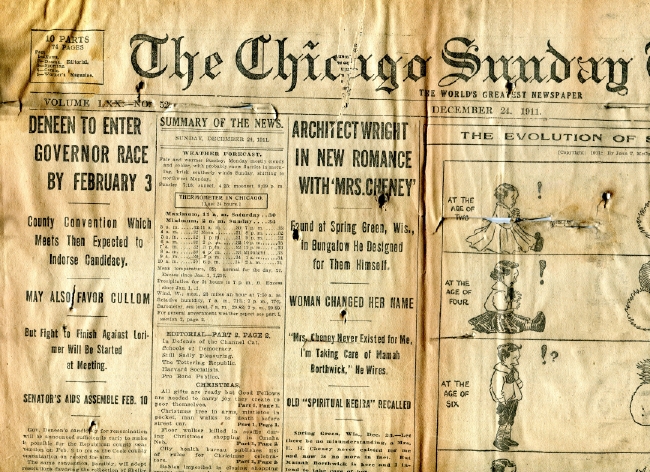 The date on the newspapers tells us that the floors were redone in 1911. The first deed to the house was in 1885, but 1895 fire insurance map records at the Historical Society show that the house didn't at that point have its wrap-around front porch. Photos do show the porch by 1901, so it must have been added by Kate Gerts Lundsford, who owned the property from 1885-1909 (she never lived in the house herself). Given that the house was purchased in 1909 by Willis K. Gore, who bought another matching lot (with a second matching house) at the same time, we think he was likely a developer. He sold our house to Dr. Needham's family in 1909. So our best guess is that Mrs. Needham didn't like the original floors, which were five inch wide pine planks -- she may have thought they looked too rustic and farmhouse-y; thin-strip wood was generally considered more elegant at that time. (And oak is fancier than pine -- less knotty.) Here are the floors side-by-side (or rather, one above the other). 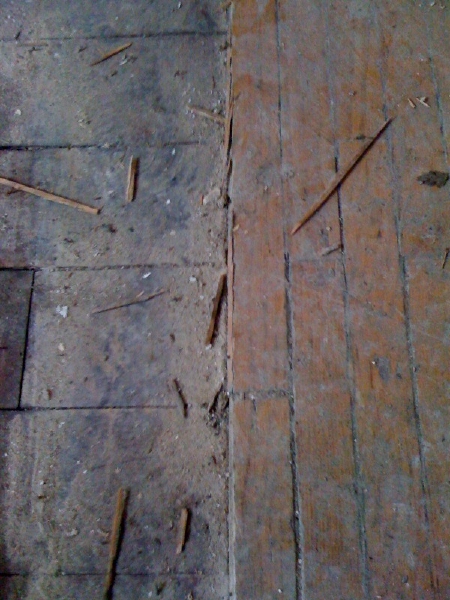 We've finished removing the thin strip oak now, and are left with wide-plank pine with a lot of nails in it. A lot. When cleaned up, it's a medium golden-brown; we're planning to stain it a bit darker, just so all those nail holes aren't quite so dramatically visible. (Like Mrs. Needham, I don't want my house to look too rustic. :-) 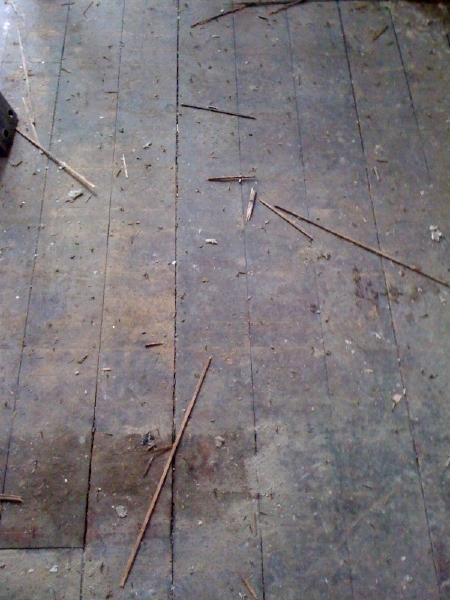 There isn't enough of the pine for the whole house -- at various points, pieces were cut out of the floors for installing appliances and such, and of course, we're adding some new area to the kitchen, my study, etc. The plan is to patch in as needed so as to end up with the first floor entirely original pine, and about half the second floor. The new master suite area will have new floors -- probably walnut, which Pam has managed to find for an impressive $3/sq. ft., stained to a similar shade. Overall, this will likely save us a few thousand dollars, even with the labor costs for pulling out (carefully) all those nails. But far more exciting than the money is knowing that we get to save and re-use these lovely old floors. It's a real thrill. Huge thanks to the Oak Park Historical Society for keeping all of these records and helping me make sense of them! I would have had no idea how to read the cryptic fire insurance map, for example. I think it was Frank Lipo who helped me that day -- thanks so much, Frank!

9 thoughts on “Even though we’re making…”