Facebook Instagram Youtube Twitter Patreon Shopping-bag
Menu
Am I crazy? I look at all these perfectly lovely houses that we could just move into. In fine shape, ready to go, even with nice Victorian exteriors. Yet so many of them just look soulless to me. They're old, but they've been renovated over and over again, and now they basically look all the same. Plus maybe a 70s kitchen. And Kevin points out that we can strip the paint off the woodwork and refinish it, that we can add crown moldings to the ceilings, and stained glass to the windows. Heck, I can take a stained glass class, learn how to do it properly, and make some new stained glass for our house myself. I'd get to customize it too, which ought to be a plus. If what I want is beyond my skills, I could get a piece custom made -- maybe a knight on his charger to hang in the dining room, or inset in the front door?

Those houses are more reasonably priced and not in need of nearly so much work -- the Mad Hatter house is desperately overdue for a paint job, for example, which may be a $15K fix, but might be $30K instead, or more, and its garage is an old barn, which may just fall down at some point if not properly supported, and we have NO IDEA how much that would cost, and the master bath is a relic of the seventies, a totally incongruous sauna thing that requires steps to climb into it, so we'd really like to change that out as well. The other houses are move-in-ready. But they're also lacking in the kinds of things that I don't think I can just add back in. Generally no built-ins -- like these original china cabinets in the Mad Hatter dining room, for example. I suppose I could get a woodworker to come and add such a thing, but I have no idea what that would cost, especially if I wanted it to look reasonably true to period. And while I can add stained glass, I can't add bay windows -- or not without a major structural remodel, which I know there's no way we'd actually do.

Am I nuts, to think that those sorts of original details are worth an extra $50K, or more? Am I crazy, given how busy my life already is, to take on a house that is going to be a serious of never-ending projects, in order to rehabilitate it to its former glory? I feel like an idiot, because if I had never looked at this house, I might have been reasonably content with one of the other PERFECTLY NICE HOUSES that we can more easily afford. But now I've seen it, and the beautifully finished Wesley Victorian that got away, and I just am having a hard time believing I could love one of these modernized houses nearly as much, or believing that I really could renovate them back into what I think they want to be.

Kirsten asked me to take better photos of the Mad Hatter house -- I know it's hard to tell from their images why I think it's so lovely. If we go back, I will. But you have to look past all the frou-frou Victorian style they used; they've got layers of swag curtains and the like, all of which we'd strip out. The Victorian style I love is closer to early Victorian, I think it's called, or Gothic Victorian, or possibly a mix of both. Here are a few photos from around the web, to suggest the kind of look I'd be hoping for. The bedroom is my favorite; the two baths are just a bit more stripped down than I'd like. 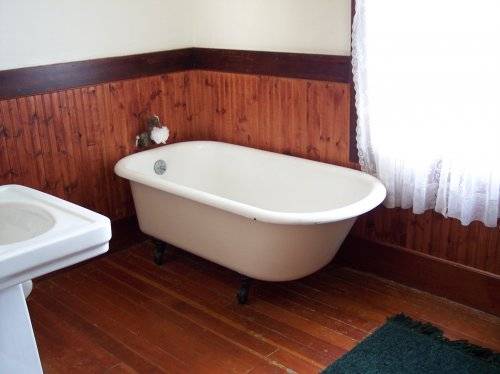 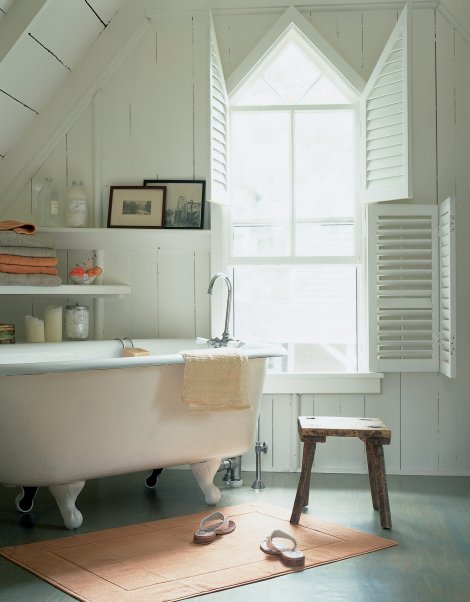 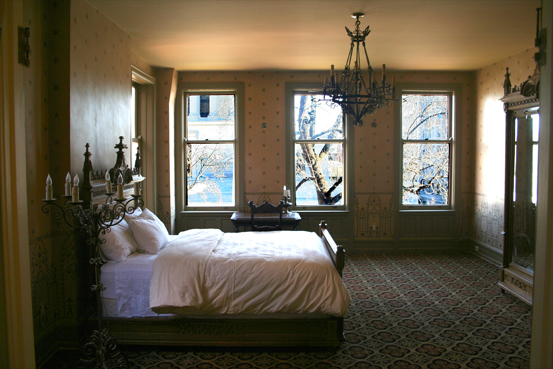 These rooms have neither built-ins nor bay windows, so maybe I should just calm the hell down. Maybe I could do exactly what I want in one of the less expensive Victorians. I just don't know. Argh.