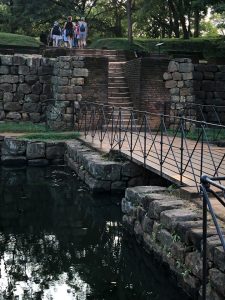 Okay, so brace yourself for some breathless colonial archeology.

“This 1898 article tells the remarkable story of the archaeological excavations at Sigiriya in Ceylon. Sigiriya was a large rocky outcrop that could be seen for miles around. It had long been thought to be out of bounds and haunted by demons by the local population.

The chief archaeologist in Ceylon, H.C.P. Bell, directed an archaeological survey in the 1890s that helped unearth fantastically preserved frescoes and a significant settlement on the summit of the hill. It really was like uncovering a lost city that had been hidden in plain sight of the local population at least for many years.

The team learned that it had initially been built as a fortress of last resort before being converted into a Buddhist monastery. The sheer quality of the artefacts and artwork discovered stunned those who witnessed it and added greatly to the appreciation of Sinhalese art and culture.

Parker’s article first appeared in Volume 1 of the Harmsworth magazine published in 1899.

‘Some Adventures in Scaling Its Walls
By Percy L. Parker

Perhaps the most remarkable rock in the world is to be found in the centre of the Island of Ceylon, and its story is full of romance. It was fortified 1,400 years ago to shelter a cowardly parricide, and when he died it became a Buddhist monastery. But for centuries no human foot rested on its summit; it was the abode of silence; its walls were buried beneath the dust of ages, birds built their nests on it and the beasts of the field haunted the jungle which grew about its base….'”

etc. and so on for several more paragraphs. Worth a read, if you can stand the columbusing.

I’m still trying to figure out exactly when elements like this modern bridge were added, but there was clearly a long process of making Sigiriya more easily accessible — I’m guessing started by the British and continued by the Sri Lankan government after Independence in 1948?

I’m certainly grateful that the British added metal steps for the climb! “He first reached the top of the rock by means of jungle wood ladders and six inch grooves cut in the rock. But once up, iron ladders and an iron rail were fixed so that constant ascent and descent could be made.”