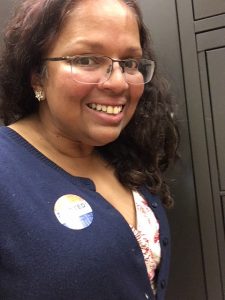 Two years ago, I dressed in suffragette white and took my daughter with me to proudly vote for America’s first woman president. I have a photo of us, standing in front of her school’s flag. This morning felt very different, and I almost wanted to dress in black — I am so full of grief and anxiety about tonight’s results.
But in the end, I put on my patriotic colors, and even some sparkling star earrings. After Clinton lost, I joined the wave of women running for office; I was elected and serve on the local library board now, and hope to continue to serve as best I can going forward. I think I have done at least a little good in office in those two years, and have modeled for my daughter what possibilities still exist for her.
Dr. King said, “The arc of the moral universe is long, but it bends towards justice.” America is our country still, despite all the pain and terror that this administration has enabled, and if we want Dr. King’s words to be true, then we must be the ones to bend the arc. It doesn’t happen on its own, and in fact, there will always be those who are very comfortable with their power and privilege, who will fight tooth and nail to preserve every inch of it.
I teach college, and I took fifteen minutes out of class to talk to my students today about voting, about running for office, about how their decisions do actually matter. They can shape their local communities, their state and federal government. Many of them don’t believe that yet, and so they don’t vote; it’s barely on their radar. If I could go back in time, one thing I would change? I’d start in college and find a local campaign to support, someone whose passion and vision for a better future was worth working for. I’d try to convince all my friends that they could make a difference too.
However this election turns out, I’m activated now, working to help build that deep bench of committed progressive candidates, with plenty of women and LGBT and POC among them. I know many of you poured time and energy into this campaign season, and that many of you had never worked on anything explicitly political before. However the day goes — that’s not nothing. That’s everything.
We’ll see that woman president in America yet. We will bend the arc to a brighter future.
Please follow and like us: