Water — the most sensual of elements. Consider its nature: it can be gentle, warm, delicious. It can trickle over your body, dampen your skin, wet your thighs. You might be caught in the rain; first a sprinkle, then a drizzle, then an engulfing downpour, a torrent, a tempest — which suddenly dissipates to a fine mist, leaving you drenched, deluged, flooded. You can immerse yourself in a steamy shower, a tub, a pond, a pool… you can even dance in a puddle. Or you may prefer a tropical lagoon, a harbor, a gulf, or a sunny, secluded cove. And of course, even if you stay at home, there’s always ice. Ice cubes, icicles…and after the ice, the thaw.

Aqua Erotica is a new anthology of writing from some of the best of today’s authors. As well as being a sexy, intelligent, and engaging read, the book has a special extra feature — it’s waterproof, from the pages to the ink to the glue in the binding! Read it in the bathtub or on the beach — leave it immersed in the pool. It’ll be perfectly readable when you take it out again, and we hope you choose to read it over and over and over again.

NOTE: Readers have been testing it with various substances other than water, and sending in notes to me. So far, I’ve had reports that the book is not proof against wine or beer, but stands up well to urine. So there you have it — anyone want to tell me about any other fluids they’ve tried?

“It would have to a very steamy bath indeed to match the temperature of the best stories collected here, which use the unifying metaphor of water to ring some sexy changes on the usual tanglings of orifices and organs. In Michael Hemmingson’s “Movements,” group sex in a Jacuzzi is only the beginning for a husband and wife on the verge of breaking up–until they find that infidelity isn’t just an aphrodisiac, it’s also good business. Hemmingson leavens the raunch with sly humor, as does Diane Kepler in “Hydrodynamica,” the tale of a physics student who takes a “study break” with a rain-soaked fantasy. Poppy Z. Brite’s “Nothing of Him Doth Fade” takes a darker view as it depicts a gay couple lost at sea during a diving tour, both of whom “did not trust death to give them that fabled final orgasm.” Diving is also the excuse for “In Deep,” by Simon Sheppard, an explicit account of a down-and-dirty gay tryst that escapes hard-core classification (if at all) only because of its razor-sharp prose. Billed as “the first waterproof book for adults” (that means plastic cover and pages), editor Mohanraj’s volume of high-class erotica hardly needs such a gimmicky presentation. Hot and wet — also extremely well crafted.” — Kirkus Reviews, 7/1/00 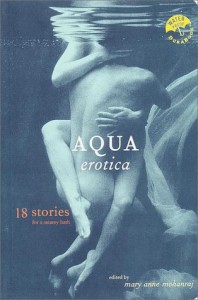 Excerpt from the Editor’s Introduction

I did receive many wonderful stories — but their nature surprised me. I had expected the collection to be full of light stories, delightful little erotic tales — cheerful, like a bubbling spring. There are certainly more than a few of those in this book. Mary Maxwell’s “I Want” gives us a pool of water in the desert and two lovers who know how to enjoy it; Diane Kepler’s “Hydrodynamica” is a tale of a student who is having a very difficult time studying her fluid dynamics; Kris Hawes gives us a teasing woman and her partner (who must choose between basketball and a steamy shower) in “Velvet Glove,” and Thomas Roche’s poor artist’s model writhes delightfully on her couch in “Watercolor.” These stories are rich, heartfelt, often complex, and I’m pleased to be able to share them with you; their playfulness is seductive and sexy. But not all the stories are so light-hearted.

There were dark currents in many of the stories I received. Love and lust, certainly — but also pain and betrayal, deaths by drowning. Some of the stories were so painful that they moved me to tears as I read them. Bill Burkett’s “Addiction” tells the story of a man trapped by his own desires, struggling to escape them; “Movements,” by Michael Hemmingson, chronicles what may be the end, or new beginning, of a marriage, and the lengths to which a man will go to save it. A few stories pushed even further–Simon Sheppard’s “In Deep” is a story which explores the boundaries of consent, loss of control, and the desire for sexual oblivion; it terrified me even as it fascinated…”

For more of the introduction, and all the wonderful stories that followit, purchase a copy of Aqua Erotica today! 🙂