Sometimes the garden evolves, and what seemed like a perfectly good idea just doesn’t work anymore. In this case, I planted this “Quickfire” lacecap hydrangea about a decade ago, and for many years, it was one of my favorite shrubs in the garden, with early white blooms that went a gorgeous pinky-red as summer turned to autumn.

But the crabapple that was here when we bought the place died not too long after, and so we put a redbud in, and that died almost immediately (bad winter, lots of people lost young trees), and so we put in ANOTHER redbud, “Ace of Hearts,” (spending a little more money to get and plant a bigger tree, hoping that would help it survive), and this one took nicely.

So nicely, in fact, that after about five years, it had grown enough to completely shade out the Quickfire. Now, hydrangeas are shade-tolerant, yes, but this one, at least, clearly blooms much less in shade. I noticed last year that it hardly bloomed, and the branches themselves were reaching towards the sun, so that it was getting a very lopsided shape. I could’ve just pruned for shape, but that wouldn’t fix the blooming problem.

So this spring, I had someone come and move it for me. (Everol, aka “Rasta with a Rake,” did a great job.) I do most of my own gardening, but moving a big shrub is a little beyond my current strength, alas.

Moving mature shrubs is always risky — even if you take a lot of care to get as much of the root ball as you can, they might not survive the transplant. But it’s been a week, and so far, it looks okay. Fingers crossed it makes it through. I’m making sure it doesn’t dry out, so the roots can get well established.

If you’re going to be moving shrubs in the Midwest, now is a good time, when the ground has just warmed up, or in mid-fall, so they can go dormant and rest over the winter. The second photo shows its new location — up against the fence, with lots more sun, and turned around so that it will hopefully grow a little more evenly. Fingers crossed!

Reminder that irises are a little slow to get going; if you received divided irises from me last year (or bought them from a garden store), there’s a good chance they won’t bloom this year.

Be patient if so — next year, they should get going. 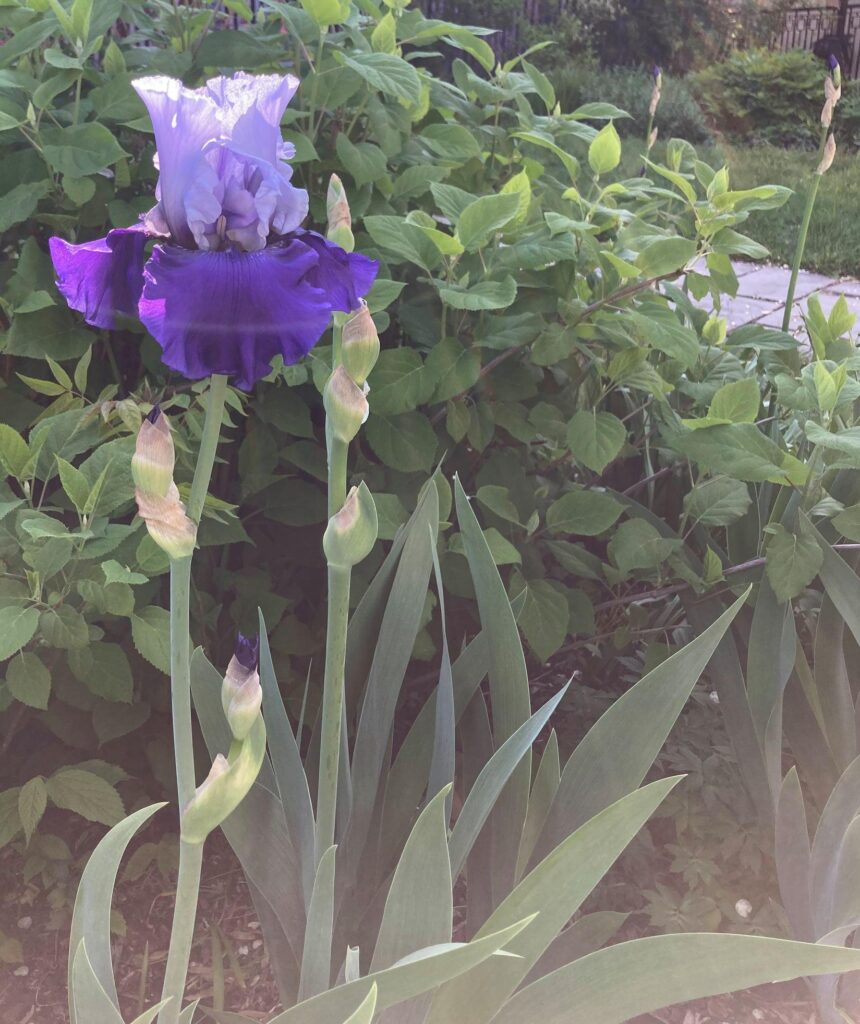 I like how this bulbous vase echoes the great pink ball of flower. 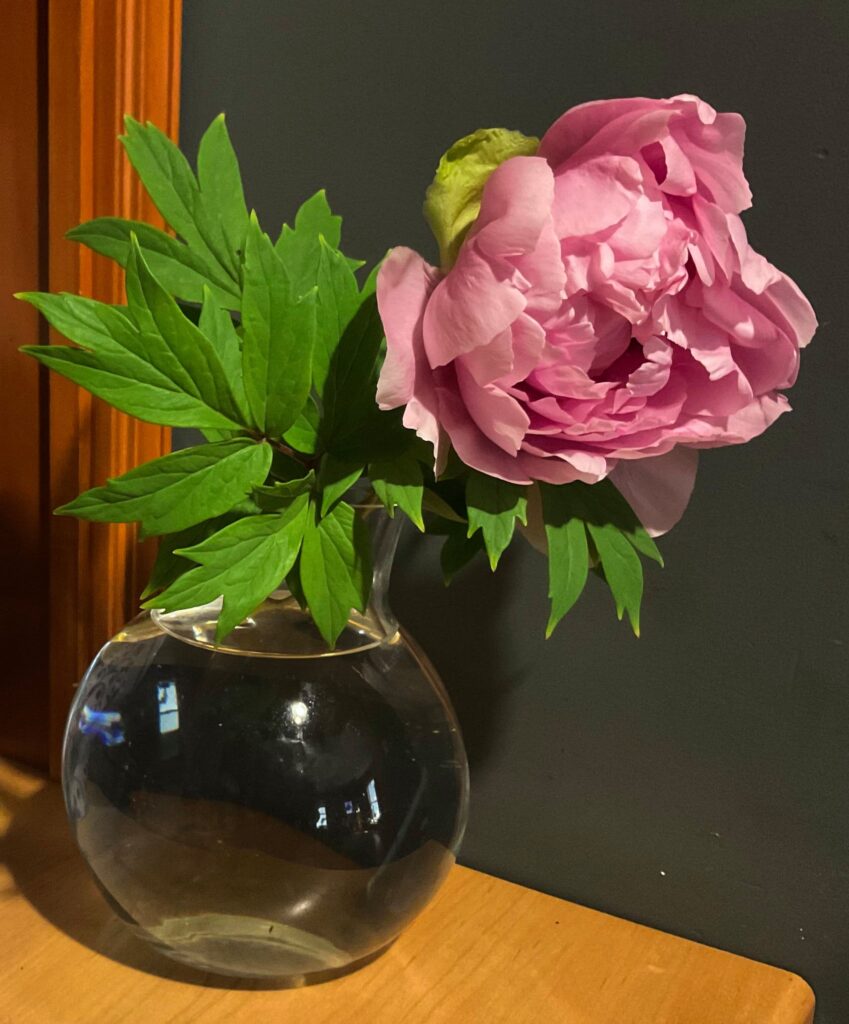 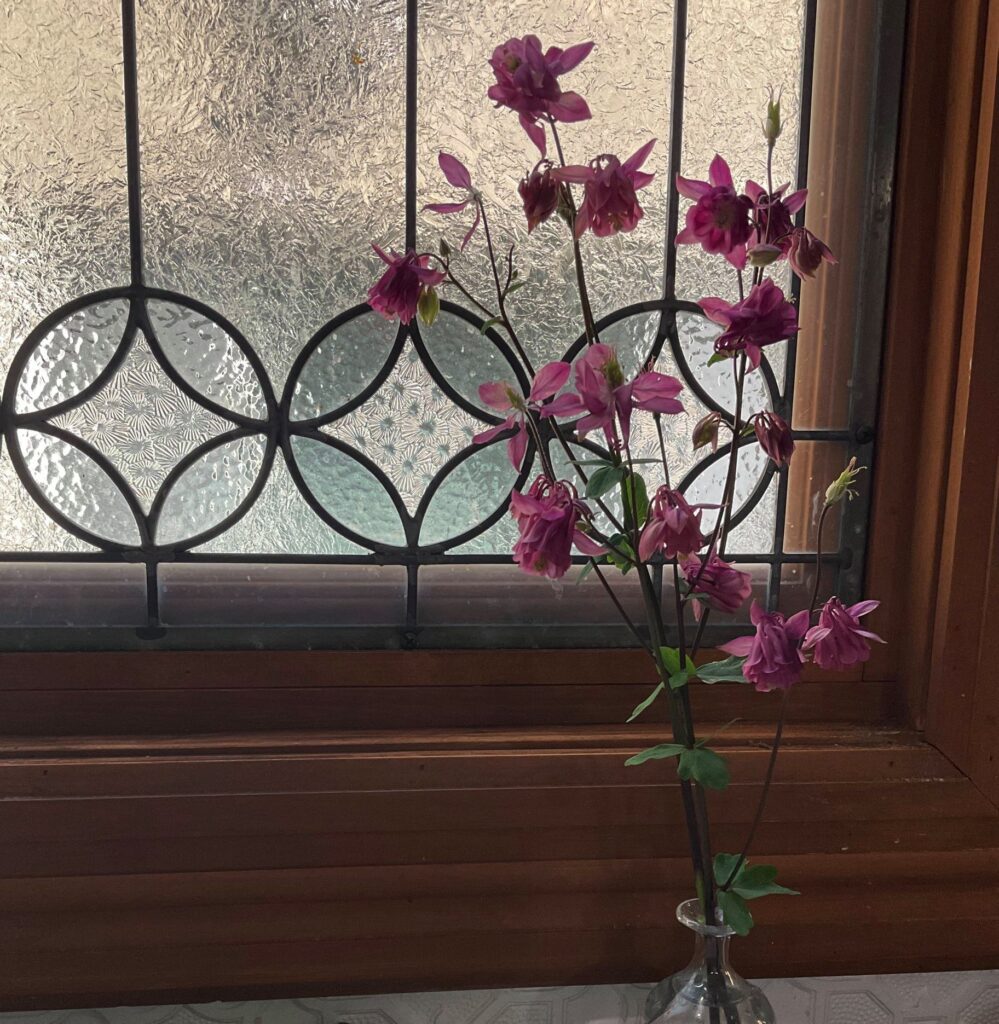 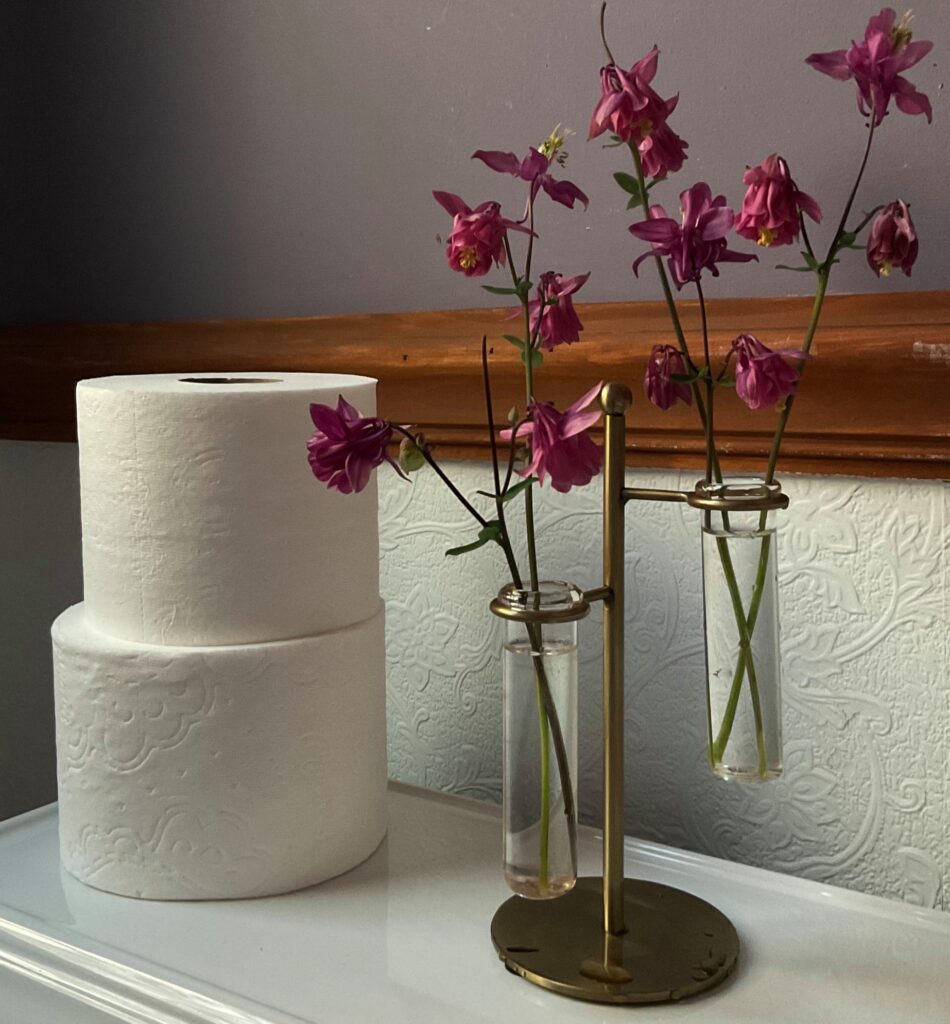 It’s a little bit of a challenge arranging columbine for indoors — the stems are so tall and spindly. I took one long stalk, cut off the lower blooms, cut down the long stem some, and clustered them together. It still looks a little wild, rather than a neat arrangement, but columbines ought to be wild, I think, so I’m okay with it. 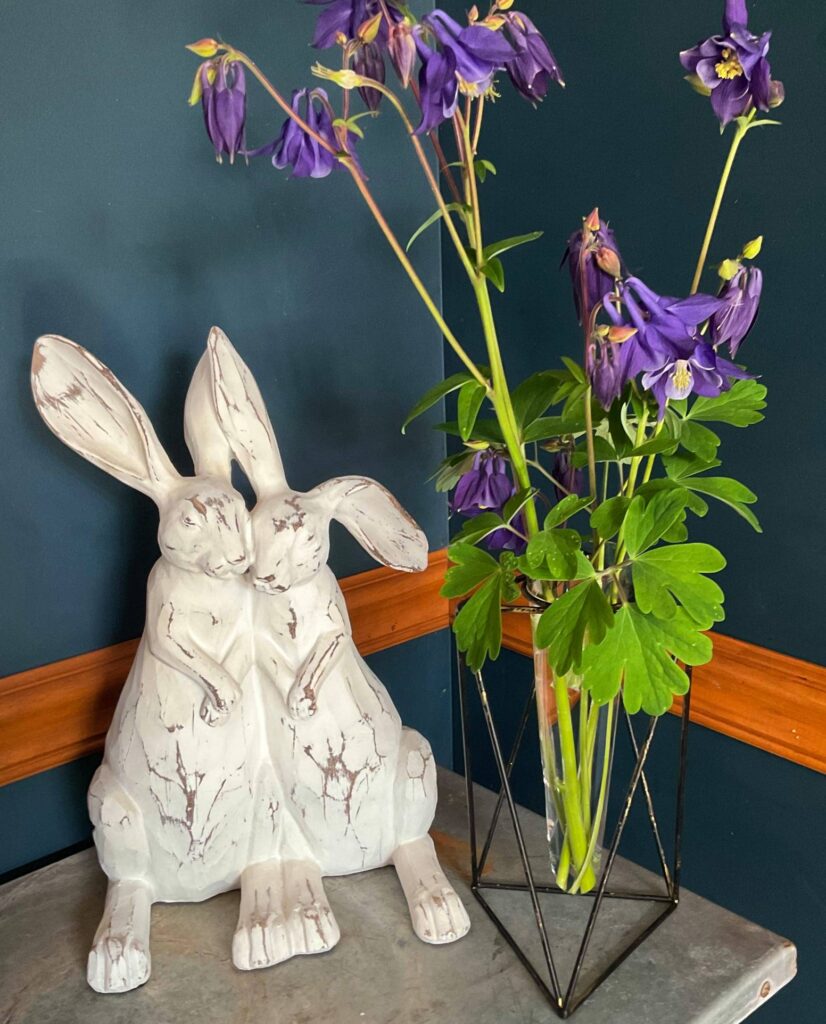 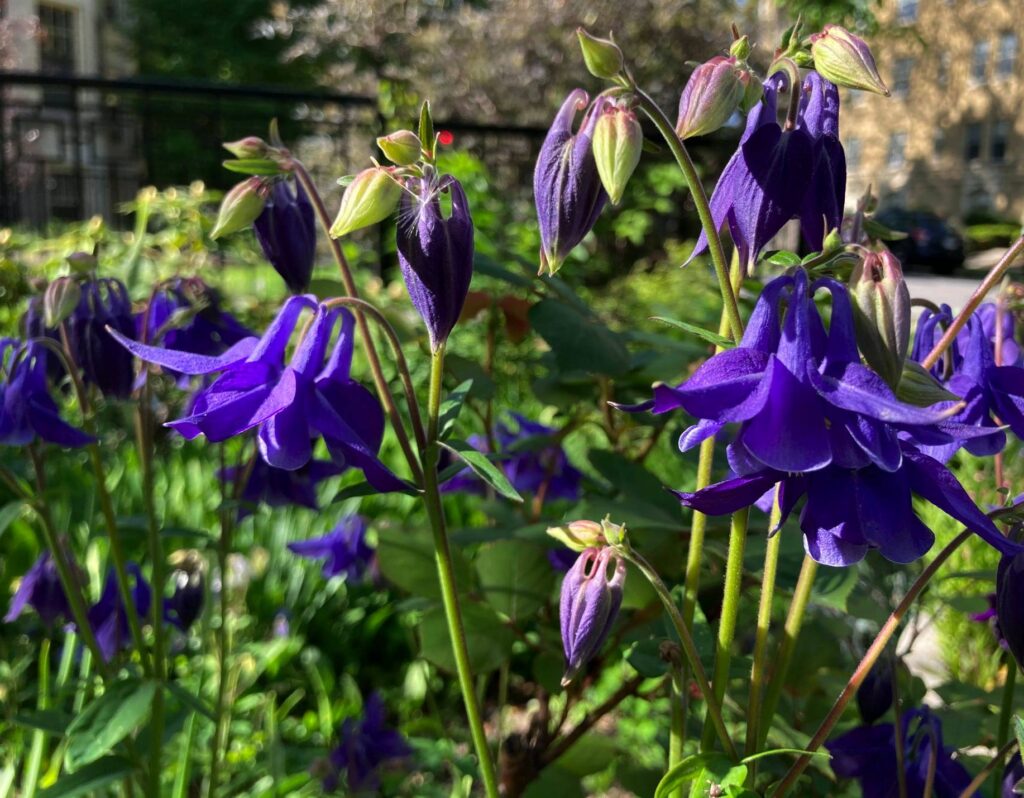 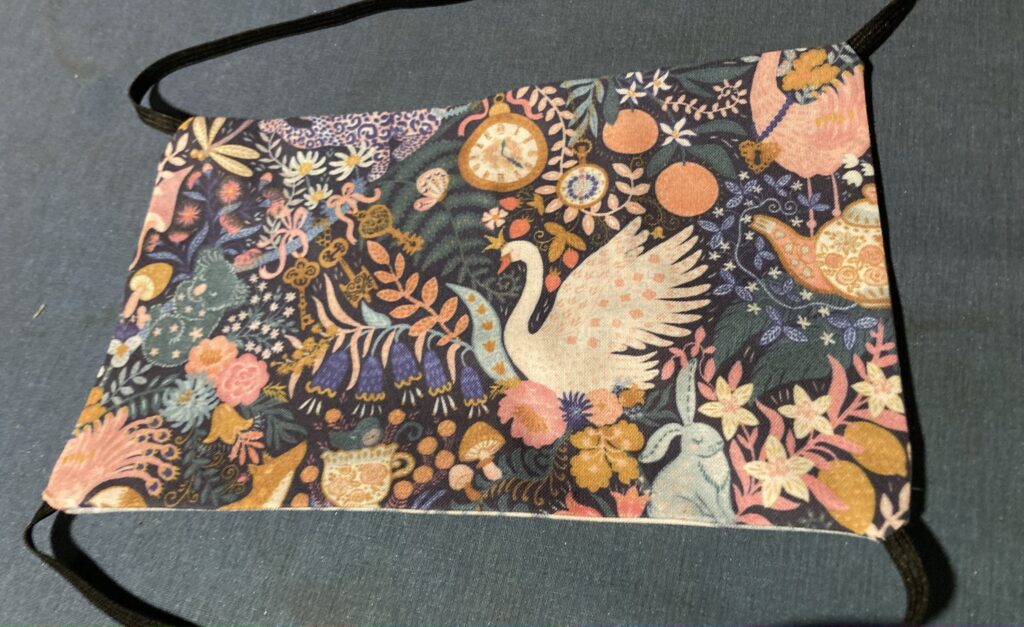 Sewed up some masks tonight too — I wasn’t sure if people would keep buying masks from me, when they’re readily available elsewhere, but some people do like the prints I’ve found, I guess. Also, the head & neck elastic option, which I think is less common. This order is nicely colorful.

It does worry me, how many masks are readily available now that are just a single layer of cotton; I hope people are being careful still.

We’re hopefully turning the corner where I live, given rising vaccination rates here, but with the other variants worldwide, the terrible situation in India and elsewhere, the likely need for boosters for all of us, the time until we can get all the kids vaccinated, and all the people who are still vaccine-hesitant…I don’t know, folks. It seems like it’s going to be a long road before this is really over. 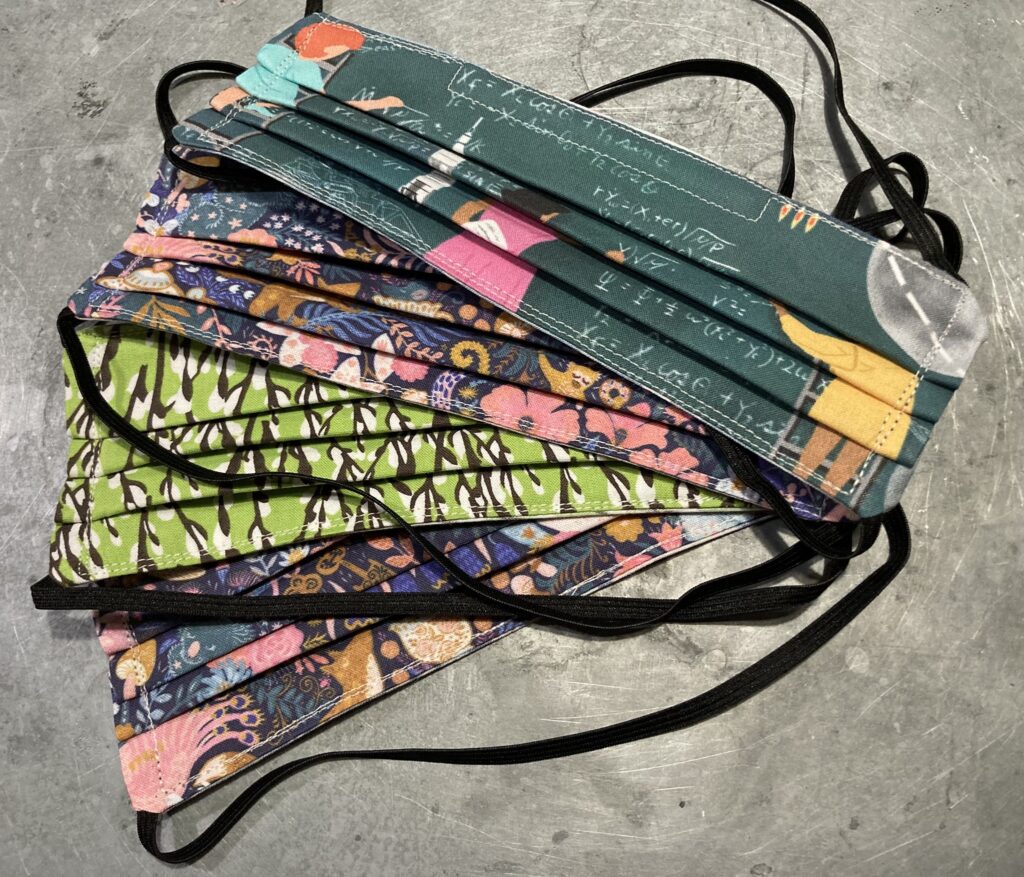 And one of the pink & white “Mayura Raksha” scarves, bringing good peacock blessings with it.

This one’s going to Kathy….I have one more on order, waiting for the fabric to arrive. Soon! I’m loving the Spoonflower Pro, which ships much faster than normal. Helps reduce my stress; I hate making people wait. 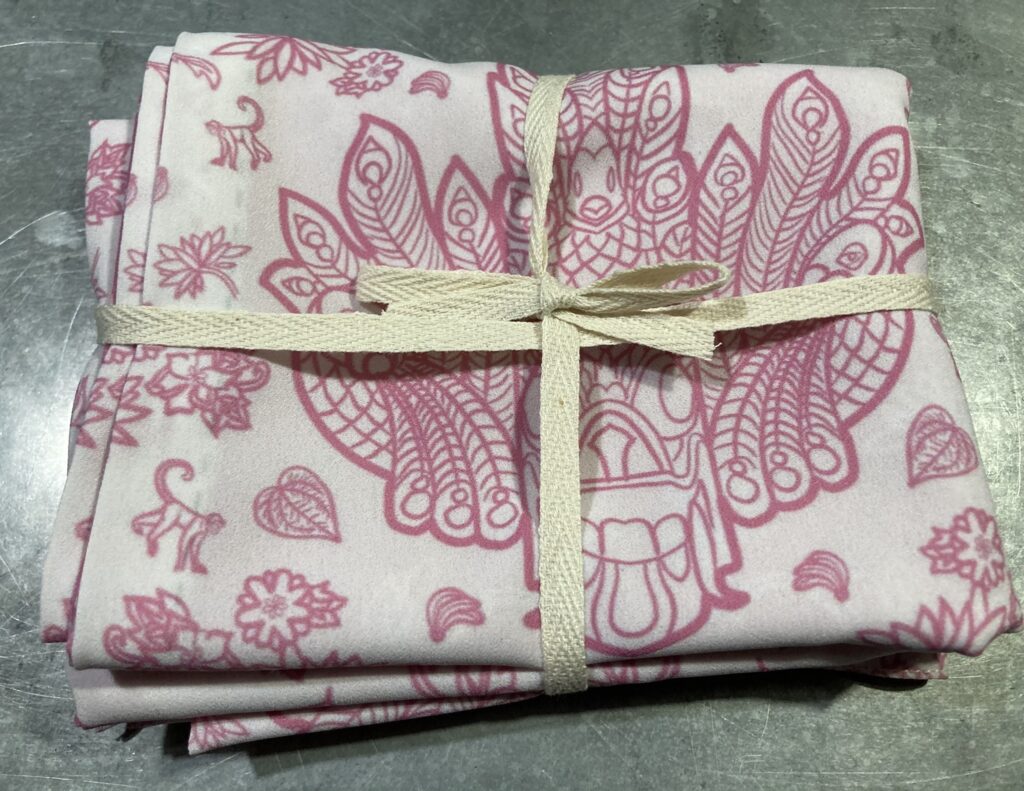